When walking city streets you sometimes have to look up to see interesting or unusual things. Most people live at street level hurrying from place to place and rarely raising their eyes above the first floor.

If you don’t look up when you’re passing Congregational House on Beacon Street, however, you will miss four outstanding bas relief-carvings of historical scenes by a sculptor whose work is well-known in Boston. Here’s the story:

The Congregational House Library and Archive 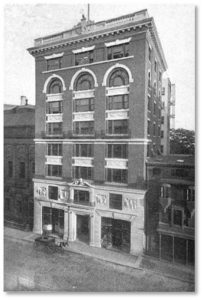 The Congregational Library and Archive, administered by the American Congregational Association (ACA), was founded on May 25, 1853. Originally located in rooms on the corner of Beacon and Somerset streets nearby, the library began with 53 books donated from personal collections.

As the collection grew, it needed a larger building and moved to the present location in 1898. The ACA built a new structure on a parcel of land that was originally part of the Boston Common and later the location of the city almshouse and workhouse.

Designed by Shepley, Ruttan and Coolidge, now Shepley Bulfinch, the building is listed on the National Register of Historic Places and is included in the Park Street Historic District.

The library’s rare book section includes a rich and complete assemblage of English and first-generation Puritan works. The current collection of 225, 000 pieces includes such notable items as:

The archive also holds oak beams from the church the Pilgrims left behind in England and a chunk of Plymouth Rock. On a more contemporary note, Congregational House was filmed as the location of the law firm of Cage and Fish in “Ally McBeal” as well as the law offices of Jan Schlichtmann in the movie “A Civil Action.”

Outside, flanking the balcony on the second floor of the Congregational Library are four bas-relief sculptures that “illustrate the core values of the Congregational tradition.” They were carved by Domingo Mora, a sculptor and immigrant from Catalonia who has left his artistic mark in various places around Boston. Mr. Mora also carved the 16 allegorical statues in the John Adams Courthouse and worked on the facade of the Boston Public Library’s McKim Building.

He carved all four historical sculptures on Congregational House from Knoxville marble, which has a delicate, pinkish-gray hue that helps highlight the figures against a colored background. From left to right, the four core values illustrated on the building are:

Because the panels are crowded with figures, it can be difficult from street level to tell what is going on or which is which. Because the building is on the south side of Beacon Street and the facade is often in shadow, the sidewalk on the opposite side of the street provides the best view. Slanting evening sunlight picks out the high-relief figures but also casts dark shadows that obscure others and make photography a challenge. My pictures did not come out well so I assembled this montage from photos on the Internet. 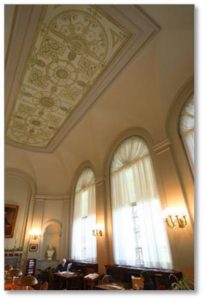 Inside, the building’s lobby looks like that of any 19th-century commercial building of that time period and only the stairway provides visual interest. The bright and sunny reading room, which is open to the public weekdays from 9 am to 5 pm, faces south. It overlooks Old Granary Burying Ground as does that of the Boston Athenaeum next door.

The Library offers tours of our stacks and archive room, both of which are otherwise closed to the public. For an introductory tour of the library, its history, collections, and services, make a reservation by contacting Claudette Newhall, Librarian, by email, or call 617-523-0470 x 229 to arrange the date and time. 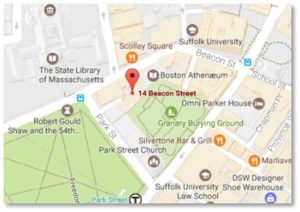 You can find information on library hours and directions on the Congregational House website. The Get Connected page holds Information on arranging tours and their historical site app.