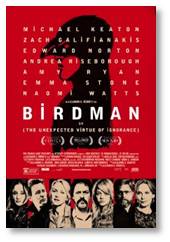 Birdman (Or the Unexpected Virtue of Ignorance) is an odd duck of a movie. It was not my selection and I had not read the reviews before seeing it with our son. That was probably a good thing.

At first I thought @Birdmanmovie was going to be one of those self-conscious, self-congratulatory films about a Grand Man with a Great Ego who builds himself up by destroying those around him—especially the Women Who Love Him—without either noticing the damage or reveling in his power to do so. I have little tolerance for men like that and don’t enjoy watching movies about them, especially within the small world of Broadway theater. Even when the Grand Man has the ability to do things that ordinary humans can’t do.

But I kept watching and gradually things began to change. The Great Ego is riddled with self doubt and fear of failure. Not everyone loves him, not even his daughter, ex-wife and girlfriend, who can all see the bare places where his feathers have fallen out. Michael Keaton’s Riggan Thomson is an actor who became a favorite of the Comic-Con crowd in his character of Birdman but is now seeking to re-invent himself by mounting a serious Broadway play. He has bet everything on this venture and needs it to succeed. While Riggan has abandoned the role, however, Birdman is clearly not done with him.

The delicious reflection, of course, is that Mr. Keaton achieved fame and fortune as the first movie version of Batman, appearing in 1989. So he has authentic street cred as a former superhero, setting the standard that Val Kilmer, George Clooney, and Christian Bale had to meet or exceed.

Not everyone fawns on Riggan and some people definitely don’t like him. Edward Norton’s outrageous Mike Shiner—a fighting cock of a man—does everything he can to undermine him, even stealing a piece of Riggan’s history. And the New York Times’s theater critic, well; you have to hear her position on the review she intends to write—without having seen the curtain open—from her own lips.  What’s a former Birdman to do?

You keep on flying, that’s what, and that’s what Riggan does, winging ahead past and through every obstacle that rears its ugly head. 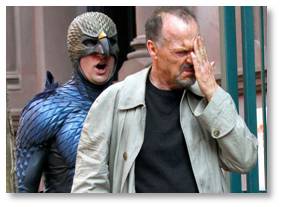 I quickly became engrossed in the story, and what a story it is: Riggan’s struggle to succeed, his conflict with the women in his life, and his inner jihad with the superhero that won’t leave him alone.

Along the way you see some truly amazing acting from both Mr. Keaton and Mr. Norton, who duel with their virtuoso talents in front of disbelieving Broadway audiences. Even though we only see snippets of their production, based on a Raymond Carver short story, we get caught up in the pure strength of their performances. And that doesn’t even included Zach Galifianakis in a straight dramatic role that he handles very well.

@BirdmanMovie is running neck and neck with Boyhood in the awards race. The two films have been nominated for multiple Golden Globe Awards and Screen Actors Guild Awards.  Having seen both, I vote emphatically for Birdman. I don’t think that @BoyhoodMovie is even in the same league. 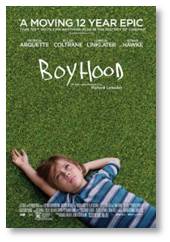 Whatever the critics saw in Boyhood, my husband and I did not share. We left the theater scratching our heads and wondering what the big deal was. While the movie’s approach is creative and unusual, the end result disappointed me.

As my friend Alane said, “You need a story.” Yes, I do. And there was no story in Boyhood. I wanted to see something that at least resembled a story arc: triumph over adversity, accepting a challenge, learning to be a better person, overcoming fear, defeating evil, achieving redemption: something. Alas, no. We watch a boy grow up, deal with his mother’s bad choices in men, and reach college age. The end.

While I can’t vote in the awards races, I can encourage you to see Birdman. If all you want to do is to peer through a voyeuristic window into the life of a perfectly ordinary and not terribly interesting family, watch Boyhood. If, on the other hand, you enjoy terrific acting, a complex story, and an ongoing puzzle as to what is actually real and what is imagined, then you will love Birdman. I certainly did.