This seems like a good time to talk about Boston’s Russia Wharf and how ships once sailed from it to purchase goods from Imperial Russia. 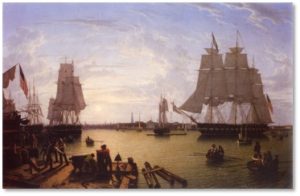 When Boston was a thriving seaport, the busiest in New England, wharves lined the working waterfront. The 1852 Map of the City of Boston Mass details nearly 60 wharves from Lewis Wharf at the North End to Terrill’s Wharf on the south, near what is now Chinatown.

Some bore the names of their owners, some the nearby area, and some the destinations of the sailing vessels. The latter group included India Wharf, Liverpool Wharf and Russia Wharf.

Originally known as Gray’s Wharf, Russia Wharf served as the focus of the Maritime Trade between Boston and Kronstadt Wharf in the port of St. Petersburg, Russia. We don’t think of Imperial Russia playing a role in Boston and United States history but it did in several ways.

According to the Russian-American Cultural Center,

“Russia, a country with abundant raw materials, supplied the fledgling experiment in democracy with hemp, sailcloth, iron and tar from the Smolny Pits for its ever-expanding fleet of ship. In fact, it’s fair to say that in the late 18th century, Russian raw materials kept American ships afloat.”

Boston merchants obtained these good from Russia by purchase, however, and not by trading raw materials or goods manufactured here. According to Diana Muir in “Reflections in Bullough’s Pond: Economy and Ecosystem in New England”

Wharfing Out and Building Up

The name “Russia Wharf” was applied to a group of three buildings on Congress Street abutting the Fort Point Channel on the east and Atlantic Avenue on the west. They went up from 1897 to 1898 after the land area was extended by building over the wharf and filling the spaces surrounding it. Author and historian Nancy Seasholes tells us that this process, known as wharfing out, “was responsible for most of the land made in Boston in the seventeenth and eighteenth centuries.” 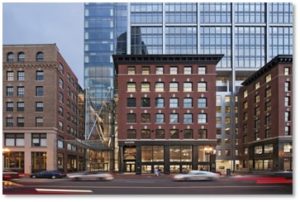 The Boston architectural firms of Rand and Taylor and Kendall and Stevens, designed two of the structures located at 270 Congress Street, which are also known as the Graphic Arts Building and the Tufts Building. Peabody and Stearns, Boston’s foremost architects of the time, designed the limestone Russia Wharf Building at 518 – 540 Atlantic Avenue.

All three structures were initially built for commercial use on the first two floors and light industrial use above. This block was used as a wharf from the early 18th century until the end of the 19th century and all three buildings housed notable printing and publishing companies.

The three buildings have a consistent look. Designed in the Classical Revival style, they are all seven stories high with matching cornice lines. The National Park Service says they,

“ . . . exhibit strong repetition of scale, materials, trim and corner-entrance motifs, and are significant as an intact trio of turn-of-the-century commercial/industrial buildings in an otherwise altered waterfront area.”

The structures were placed on the National Register of Historic Places in 1980. 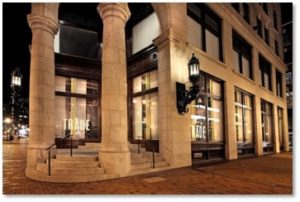 Those three buildings have been renovated and developed with a new tower to form a complex now called Atlantic Wharf. The developers retained the original Russia Building in its entirety, along with the south- and east-facing walls of the other two structures. They gutted the interiors of the Tufts and the Graphic Arts buildings and constructed a new tower above them, designed by Childs Bertman Tseckares architects.

Because the facades remain intact, however, you can walk past the buildings and not realize that the original interiors no longer exist. That retains the area’s historic look. CBT Architects describes their design as:

“The property links the Financial District to the Waterfront by maintaining the scale of the historic facades, while also introducing the modern element of the glass tower setback from the street. Constructing and renovating a building on a previously developed site in a dense community channels development to urban areas with existing infrastructure and preserves natural resources.”

The extant seven-story limestone Peabody & Stearns Russia Building on the northwest corner of the site is notable for the arches and columns of its two-story corner entry, which is flanked by beautiful and elaborate wrought-iron lanterns. The big doors now open to a restaurant appropriately named Trade. 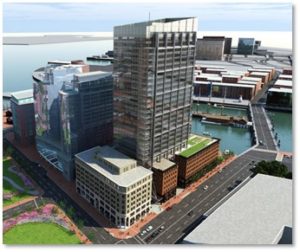 The Atlantic Wharf Complex from above

The developers completely renovated this structure for residential use and ground-floor retail businesses. The new 31-story, glass-walled tower behind the preserved historic commercial façades contains a mix of office, retail and public uses.

The eighth floor of the old Tufts Building holds a sculpted roof garden created by Halvorson Design. You can get a good look down at its rows of plants in various colors from the observation deck at Independence Wharf.

The Atlantic Wharf, complex provides a great location from which to explore the waterfront, the Tea Party Ships and Museum, and the Fort Point Channel Historic District. While you’re there, check out the scale-model of Boston in the BSA Space. In addition to restaurants, if offers an underground parking garage off Congress Street with very reasonable rates at night and on weekends. Oh, you can also use clean public restrooms in the lobby of what is now the Atlantic Building at 290 Congress Street.