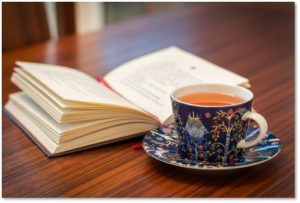 One of the great pleasures of the Christmas / New Year holiday season, especially for people who work time-consuming jobs, is having some free time to read. When I was working, I looked forward to finding some quiet hours by the wood stove with a bowl of popcorn or a cup of tea and a good book.

Like most people who read for pleasure, I had a stack of books that often didn’t get the attention they deserved and received more books for Christmas. (The Japanese have a word for this: Tsundoku. It means books unread.) Yet I was too busy juggling work, family, exercise, and other demands to read many of them. “Me time” always included reading but time for and by myself always seemed to come last.

Now that I’m retired, I still don’t read as much as I would like because I’m busy writing—either for a blog post or working on a novel in progress. Now, however, I belong to a book group and that forces me to complete at least one book a month.

That means I still look forward to reading by the fire—although now it’s a gas fireplace—with a good book and a bowl of popcorn.  If you need some ideas, I would like to introduce you to four fascinating people. Three are fictional, one lived a great life. I hope you enjoy meeting them as much as I did.

A Gentleman in Moscow by Amor Towles

The best novel I have read this year—or for many years—is A Gentleman in Moscow by Amor Towles. When I scanned the synopsis, I thought it sounded, well, claustrophobic. A book set entirely in a hotel? In Moscow? How could it not feel constrained? The answer comes in the form of superb writing, a fascinating protagonist, and a revolving cast of characters about whom you come to feel strongly. 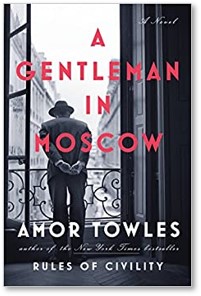 “A Gentleman in Moscow immerses us in another elegantly drawn era with the story of Count Alexander Rostov. When, in 1922, he is deemed an unrepentant aristocrat by a Bolshevik tribunal, the count is sentenced to house arrest in the Metropol, a grand hotel across the street from the Kremlin. Rostov, an indomitable man of erudition and wit, has never worked a day in his life, and must now live in an attic room while some of the most tumultuous decades in Russian history are unfolding outside the hotel’s doors. Unexpectedly, his reduced circumstances provide him a doorway into a much larger world of emotional discovery.”

Mr. Towles creates a story of character growth and evolution in the midst of national and social upheaval. I couldn’t put it down.

The Unspoken Name by A.K. Larkwood 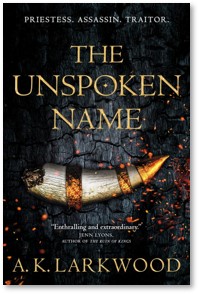 If, like me, you enjoy a good read that takes you out of this world and into one that’s completely different, don’t miss this book.

“What if you knew how and when you will die? Csorwe does. She will climb the mountain, enter the Shrine of the Unspoken, and gain the most honored title: sacrifice. On the day of her foretold death, however, a powerful mage offers her a new fate. Csorwe leaves her home, her destiny, and her god to become the wizard’s loyal sword-hand — stealing, spying, and killing to help him reclaim his seat of power in the homeland from which he was exiled. But Csorwe and the wizard will soon learn – gods remember, and if you live long enough, all debts come due.”

What I liked most was the combination of the tropes of fantasy, the tech of science fiction, and the contemporary attitude of the protagonist. Csorwe is smart, fierce, irreverent, snarky, and very funny. If you like strong female characters, make her acquaintance as soon as you can.

I don’t read a lot of nonfiction, mostly because I find that much of it is badly written. When this became a book-club read, I groaned, thinking it would be depressing and overly sentimental. Boy, was I wrong! 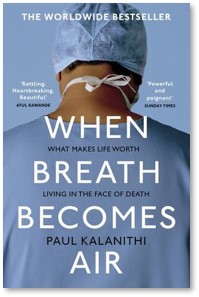 “When Breath Becomes Air chronicles Kalanithi’s transformation from a naïve medical student “possessed,” as he wrote, “by the question of what, given that all organisms die, makes a virtuous and meaningful life” into a neurosurgeon at Stanford working in the brain, the most critical place for human identity, and finally into a patient and new father confronting his own mortality.”

I found this book riveting from start to finish. Mr. Kalanithi’s life was fascinating but cut short far too soon. Learning how he decided to become a neurosurgeon, what kind of training that involves, and how he aced it took up the first section. The second section goes from his diagnosis of cancer to beyond his death, but it is never maudlin or sentimental. He looked at his death with the same analytical eye he trained on his life. You will not soon forget him.

The Midnight Library by Matt Haig 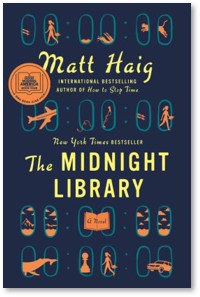 How many times have you wondered what your life would be like if you had just made a different choice at some point—or points—in your past. Would it have been better or worse? Would you be happier now or not?

“Nora Seed finds herself faced with this decision. Faced with the possibility of changing her life for a new one, following a different career, undoing old breakups, realizing her dreams of becoming a glaciologist; she must search within herself as she travels through the Midnight Library to decide what is truly fulfilling in life, and what makes it worth living in the first place.”

Nora Seed is an everyman / everywoman character who is unsatisfied with her life. Unlike the rest of us, though, she gets the chance to revisit those pivot points when her life might have gone in a completely different direction. The fun comes in watching these lives play out, seeing along with Nora what she liked and didn’t like, and cheering her on as she overcomes the fears that have shaped the “root life” she hated. It’s a fun read and very well written.

Books by the Fire 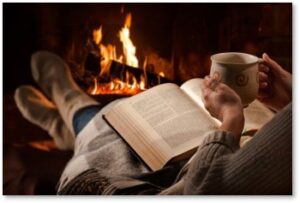 There you have it: four books to read and four worthy characters to spend some holiday time with. It wasn’t until I finished writing this that I realized all four books focus on the nature of lives: lives cut short, lives expanded, lives considered, and lives revisited.

You may prefer pretzels to popcorn and a single-malt to a cup of tea but that just enhances your reading time. Light the fire, pour a glass and pull up a chair. If you’re lucky, you can add a cat in your lap. Then open a book and enjoy!