When you drive west on South Huntington Avenue, (typical New England directions) you will see a brick wall on the right side of the street. The wall, with a carved stone cap, looks very nineteenth century but the Bell Olmsted Place residential complex behind it is unmistakably twentieth century construction. How did this happen? 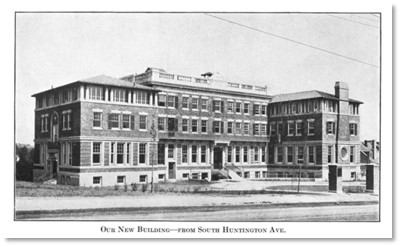 The New Knight Children’s Center in 1914

The answer lies in the history of the New England Home for Little Wanderers and its Knight Children’s Center. For over 200 years, this institution has provided a variety of services for child and family development at every stage of development. Ten Boston-area businessmen founded the NEHLW in 1865 to care for children who had been orphaned and left homeless by the Civil War.

Not an “orphan’s home” in the traditional sense of a permanent residence, the founders sought to create a “way station” in which children could prepare for a new life. The private charity accepted homeless and destitute children from all over New England without regard for race, color, sex or religion.

The charter, granted by the Massachusetts Legislature, declares its goal,

“. . . of rescuing children from want and shame, providing them with food and clothing, giving them instruction in mind and heart and placing them, with the consent of their parents, or guardians in Christian homes.”

The founders understood that a new life could be created with families outside of—and far from—the Boston area. The NEHLW sent children wherever they could find a home and participated in the famous, and controversial, Orphan Train movement. Every senior administrator of the NEHLW between 1865 and 1906 personally took one or more companies of children on trains heading west out of crowded Eastern cities.

The Boston architectural firm of Brainerd & Leeds constructed the Knight Children’s Center on South Huntington Avenue in 1914 to serve as the NEHLW’s new home. The architects designed the three-story structure of brick and stone in the Georgian style and made it fireproof. The NEHLW stated,

“About 1000 inmates pass through the institution in the course of a year, the most detailed record of them being kept after they pass from beneath the roof of the building to homes elsewhere.”

Because of the cost of renovating or replacing the structure, the NEHLW put the Knight Children’s Center up for sale in 2011. They moved the children to another facility in Walpole and development proposals for the site began to come in. 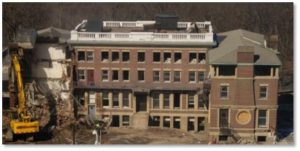 The Boston Residential Group purchased the property with the intention of converting it to luxury housing. Along the way, that plan changed into taking down the Knight Children’s Center completely and  constructing something totally new.

At a meeting of the Jamaica Pond Association, company CEO Curtis Kemeny said,

“Boston Residential Group is very sensitive to historic structures. We looked at several alternatives here and we couldn’t figure it out.”

After weathering a 90-day delay mandated by the Landmarks Commission, the Boston Residential Group went ahead with its plans. The company razed the 100-year-old building in 2014 and built Olmsted Place, which they sold to Bell Partners in July of this year.

I have no comment about the style of Bell Olmsted Place, which looks to me like any 21st-century apartment building. But the New England Home for Little Wanderers built the Knight Children’s Center to last. Today it is difficult to erect anything that matches the quality and strength of 1914 construction.

Wall Instead of Fence

The developers replaced the original metal fence with a high wall. Its brick and stone construction echoes the original Georgian building while buffering the tenants of luxury apartments from the street. The wall has the irony of looking more like the Knight Children’s Center than the buildings behind it do.

The Christmas season, when we sing about a child born in a stable because there was no room at the inn, seems a fitting time to remember a building that once sheltered homeless children without discrimination and a staff dedicated to finding them new families and a new place to live.