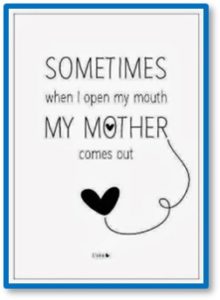 Oscar Wilde wrote “All women become their mothers, that is their tragedy.”  Was he right?

Yes and no. Many women become their mothers, and for the most part I do not regard this as tragic. As I reflect on his thinking, I conclude I am more like my mother than not.  Genetics guarantee I look like her; but the face staring back at me from the mirror resembles the mom I remember from my childhood.

My voice speaks phrases in her voice. Her mannerisms have morphed into mine, and the steel rod that was her backbone, a trait I feared and admired, is part of who I am.

Mother-daughter relationships are difficult. The teenage me resented my mom because she demanded so much of me. She offered no praise for what was expected and no reward for achieving goals she deemed realistic.

I detached myself from her but at the same time learned to identify myself with her; eventually embracing the characteristics and the mom I once criticized. As a teenager I took an oath never to become like her! I vowed to raise my children differently and better. She invited me to call her when I actually had some children.

Despite this ongoing introspection, I always arrive at the place where I began. We are different but we are also the same. I am becoming the older, wiser version of my mother.

We Become What We Behold

Not every woman becomes a duplicate of their mother. I suspect we are more like amalgamations of the times and places we are raised, shaped by women whose presence influenced us throughout our lives.

I grew up surrounded by kick-ass women. They had strong confident voices and attitude you could feel; others were low key, soft spoken role models. Their strength and determination were not out there in the open. It was harder to see and emulate but just as powerful.

Both paved a yin and yang path, enabling me to become my individual self. I did not fully appreciate them until I was on the other side of forty. They influenced me directly and indirectly, celebrating my achievements and correcting my missteps.

Strong women never intimidate me. I admire them for who they dare to be and shamelessly imitate them. They have taught me to dress for success, fight for equal opportunity and pay and stand my ground.

My maternal grandmother was soft spoken, lacking outward confidence and authority, but her resolve ran deep. She finished high school, did not know how to drive, and never worked at a paying job. I loved and admired her, though I did not see her often. Visits to her home in rural Wisconsin were the high point of a summer during Dad’s home leave. 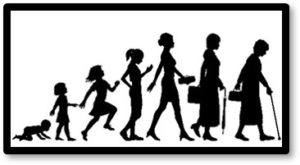 As a child, I saw someone who cooked without recipes, was adept at sewing and embroidery; and canned amazing pickles and jam. She taught me these things and her antique Singer sewing machine, proudly displayed in my office, keeps her memory alive.

As an adult, I see her through a different lens. She raised seven children during the depression. Baking, canning and sewing were an economy not a hobby. Her life was centered in her family. Hard times were dealt with, she did not complain because there was no point.

My mother was a force to be reckoned with—a survivor and a fighter. I thought she was too strict; with standards impossible to reach on my best day. She inherited my Grandmother’s talent for cooking and sewing but found her own path to a college education and nursing career. When she married, she left her job, raised five kids and followed my Dad around the world throughout his military career. She was as tough as nails. When you fought the law, the law won. She took no prisoners.

Both of these women are my heroes and continue to guide me on my journey. I feel their presence when I least expect it. I hear their voices and wonder what they would say if they could see me now. I only wish I understood and appreciated them sooner.

Strong Women and My Mother

I look in the mirror again. I may think I’ve become my mother, but the truth is those shoes are too big to fill. I will never accomplish things on her scale. The mountains she climbed are smooth paths for me thanks to the enforcement of standards I resented in my teens. 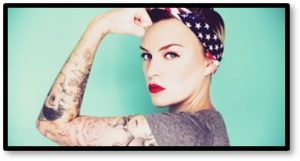 Accountability and responsibility were drilled into me at an early age, rooted in her knowledge that I would need them to succeed. She encouraged me to dream big and live life without hesitation or boundaries.

I am like my Mom in so many ways, grateful for her parenting and acceptance of nothing less than my best. I work hard to pay it forward, rewarded by the humans I raised and put into this world. Though she has been gone almost eighteen years, I hope she knows I was listening.

I appreciate my mother now in a way I couldn’t before. I see her strength, raising me to live with curiosity and passion. I see her determination, grace and humility when life threw her curve balls. I see her courage, never accepting the status quo when more was possible.

I will never totally be her, but I am her daughter and strive daily to be like her.

On the darkest days when I feel inadequate, unloved, or unworthy,
I remember whose child I am, and I straighten my crown.