This year’s shoulder season at the movies featured some excellent films even before we reached the holidays when the big tentpole blockbusters come out. We have encountered a neurosurgeon, professors of symbology and linguistics, a WWII Wing Commander and a magizoologist. That’s quite an assortment of characters—most of them far more intellectual than the usual movie hero. Hooray for that.

Here’s a list of the movies we’ve seen in alphabetical order with a plot summary and my recommendation for each.

Five Hits and Flops at the Movies

“In 1942, an intelligence officer in North Africa encounters a female French Resistance fighter on a deadly mission behind enemy lines. When they reunite in London, their relationship is tested by the pressures of war.” 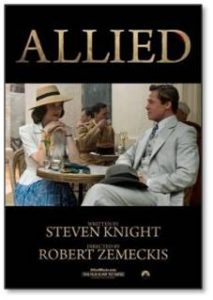 Love blooms in Casablanca. Hmm, does that sound familiar? In Allied, however, the lovers don’t have to part on a foggy runway keeping only their memories of Paris. Brad Pitt as Canadian air force officer Max Vatan and Marion Cotillard as French spy Marianne Beauséjour play spies who meet in the fabled Moroccan city to carry out an assassination. They become a couple that may or may not be quite on the up and up as the Allies try to liberate Paris.

What works: The action, the suspense, the denouement, the settings and the costumes. (Although I could not understand why any woman would want to wear a long-sleeved evening dress in Morocco. Just saying.)

What doesn’t work: The romance and the passion. Love among the Nazis can be done but it just doesn’t click in this movie. Max Vatan’s sister, Bridget (Lizzy Caplan) describes her brother as “frozen” but thawed by his love for Marianne. Somehow I missed the thaw. Max is a pretty tightly wound character who kills coldly and easily but finds it harder to act the role of a loving husband. Even when he actually does become a devoted husband and doting father, his affections don’t quite ring true, as if he’s separated from them by a transparent wall. Ms. Cotillard does all the heavy lifting here, trying to create enough passion for two in the face of her co-star’s chilly reserve. I fault Director Robert Zemeckis for directing this performance because I can’t imagine Brad Pitt phoning in such a cool portrayal.

Recommendation: I enjoyed Allied and recommend it for people who like spy movies, suspense and WWII action. This film is more sophisticated than the blood and gore war movies, more concerned with the mind than the guts. It goes down smoothly even if not completely satisfying

“A linguist is recruited by the military to assist in translating alien communications.”

Of the five movies in this post, Arrival was my favorite by far. People who might be turned off by a “first alien contact” description should know that this movie is about much, much more.  Faced by the challenge of communicating with 12 alien ships scattered around the world, the U.S, military recruits Ph.D. Linguistics professor Louise Banks, played by Amy Adams.

What works: Among the movies in the first contact genre—and I have seen a lot of them—this is the first film that actually conveys the terror of encountering an entirely new species without knowing their intentions or their goals. Going up into that ship is terrifying and meeting the “heptapods” is even more so. When scientist Ian Donnelly (Jeremy Renner playing against type) vomits after his first encounter I understood completely. There’s no “ET phone home” on these ships.

The following journey of discovery, challenge, slow learning, risk taking, memory, and leaps of faith takes us along for the ride willingly and happily. I can’t tell you much about that journey without spoiling some of the rich surprises and discoveries that you make along with Professors Banks and Donnelly. This is intellectual science fiction, the kind we saw in Gattaca and Ex Machina, as far from space opera as we can get. I love intellectual movies so this one fired on multiple cylinders for me. 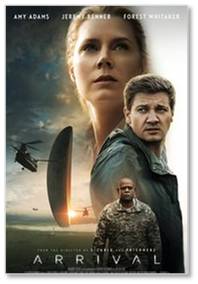 What doesn’t work:  The heptapods, like many fictional aliens, look more like animals than sentient creatures. I had a difficult time envisioning them building, launching and piloting a space ship of any design. And these ships seem more carved out of solid rock than manufactured for flight.

Recommendation: Go see this movie even if you hate science fiction. It will make you think while you’re watching it and afterward. I would love to get in a good conversation over dinner with someone else who has seen it and, preferably, enjoyed it.

Note: The theater was packed the night we saw Arrival so word of mouth is spreading. Get there early.

“A disgraced former surgeon named Stephen Strange (Benedict Cumberbatch) becomes a powerful sorcerer under the tutelage of a mystic known as the Ancient One (Tilda Swinton).”

Never having read a Doctor Strange comic, this all came to me as new material and I was immune to the whitewashing of the cast that caused others some angst. Lacking that baggage, I was free to enjoy the movie. From the streets of New York to the monastery/school/dojo of Kamar-Taj in Nepal, Doctor Strange moves right along and adds a welcome mystical twist to the whole superhero trope. 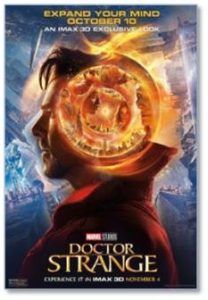 I particularly enjoyed the fact that Dr. Strange has to gain his superpowers in the same way he gained his surgical skills: “Study and practice. Years of it.”  No radiation or spider bites for him.

What works: Pretty much everything in this movie worked for me. Mostly, however, I admired the script by  Director Scott Derrickson, Jon Spaihts and C. Robert Cargill, This Whedonian mix of humor, insouciance, one-liners, smart-ass comebacks, misdirection and misunderstanding takes Dr. Strange a step above most action/superhero/comic book movies. The script gives us exactly the opposite of what we have come to expect of this genre at every turn. I loved it.

Recommendation:  See this is you like fantasy, action, humor, great special effects, and more than a touch of mystical suspension of disbelief.

Note: Stay for the two post-credit Easter eggs—one at the beginning of the credits and one at the end.

Fantastic Beasts and Where to Find Them

“The adventures of writer Newt Scamander in New York’s secret community of witches and wizards seventy years before Harry Potter reads his book in school.”

FB&WTFT takes us back to Potterland only on this side of the pond. The always-excellent Eddie Redmayne shows up in early 20th-century New York carrying a magical suitcase. The top is filled with clothing and toiletries that are suspiciously neat and clean after weeks of travel at sea. Underneath that, in the false bottom that usually houses disassembled sniper rifles or vials of deadly substances, hide a bevy of magical beasts. One escapes. Suitcases get switched. Much chaos ensues. 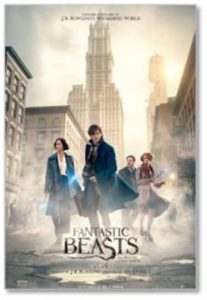 The special effects live up to expectations. Director David Yates and his SPFX team create a wonderful sense of space and time in a New York City that is amazingly clean and orderly. Only Colin Farrell as the Wizard Graves provides dramatic tension and a sense of evil.

The most fun comes from watching Newt Scamander and his friend Kowalski (Dan Fogler) step into the suitcase and down into Newt’s laboratory and magical-beast rescue farm. The kids will love this one. Even when the wizards destroy New York City (They couldn’t resist. Everyone destroys New York City.) they put it back together again. Insurance companies have got to prefer wizards to superheroes or even the agents of S.H.I.E.L.D.

You can read some political allegory into FB&WTFT if you are so inclined. The Magical Congress of the United States of America is a closeted group of witches and wizards. The New Salem cult wants to burn witches (although no witches were burned in Salem) like certain groups today want to destroy homosexuals, liberals, and people of color. Graves could serve as a surrogate for our President-elect. Or you could just take the plot as conflict between witches and nomaj people (American muggles.) Whatever floats your boat.

Recommendation: If you’re going to see this one, see it on the big screen. TV won’t do justice to city, beasts, magic and all that wizardly jazz. 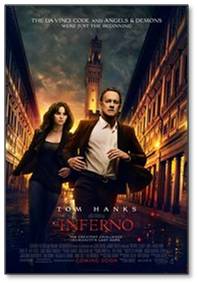 Okay we knew Inferno was going to be bad but we wanted to take a short trip to sunny Italy. So we jetted around Florence and Rome from our seat in the theater and had fun doing it. Inferno works fine as a travelogue but not so much as a thriller.

It asks a lot of questions but never really provides the answers. Who created the cylindrical device that projects a revised painting of Dante’s Inferno? Who made this elaborate painting and scattered tiny obscure clues around it? Why and when did they do it? Dante’s literary MacGuffin succeeds in moving the plot along for a while minus any explanation as to the cylindrical projector’s provenance or, for that matter, its purpose.

After being sought by everyone the device is abandoned as Professor Robert Langdon and his third beautiful sidekick race around Europe—his usual modus operandi—trying to stop a group of anarchists from unleashing a plague that will destroy 90% of humanity. This “we had to destroy the world to save it” scenario never quite works but it does take us to Venice and then Istanbul for more gorgeous scenery.

Who are the good guys and who are the villains? What does the lovely assassin want to kill Dr. Langdon? Who knows? Do we care? Not

Recommendation: If you want to see this movie, wait for it to show up on TV. It will make a pleasant enough diversion, particularly if it’s snowing and cold outside. Ah, sunny Italy.

More later, after we’ve seen some of the seasonal offerings.