Travelers can see many beautiful buildings in countries around the world. I have been fortunate enough to see a few of them. In my experience, however, nothing compares to the Prince-Bishop’s Residenz in Würzburg, Germany. This enormous palace contains many gorgeous rooms—and the astonishing Tiepelo ceiling.

Built by Germans, decorated by Italians and Swiss, nearly destroyed by the British and saved by an American, this ceiling is an architectural marvel, an artistic wonder, and an historic landmark. I have been to the Sistine Chapel but its ceiling, beautiful as it is, didn’t move me to the awe I felt at seeing the Tiepelo ceiling over the Grand Staircase at the Residenz. For me, more is more.

When our Viking River Cruise stopped in Würzburg, I went on the tour but my husband declined. Only days before we had seen the Schönbrunn Palace in Vienna and he was palaced-out. Too bad; he missed something extraordinary.

First, the Residenz is enormous, as one would expect. Designed by Balthasar Neuman, the court architect for the Bishop of Würzburg, Johann Philipp Franz von Schönborn and his brother, Friedrich Carl von Schönborn, its construction took from 1720 to 1744. Interior decoration was not completed until 1780. Architecturally the Residenz synthesizes multiple styles, included neo-Classical, Baroque, Rococo, and French Château. Napoleon called it, “the nicest parsonage in Europe.”

Once we entered the palace, we had to lock our purses and day packs in a box. No phones or cameras are allowed in the Residenz.

Note: Put money in your pocket or you won’t be able to buy anything in the gift shop at the end of the tour. The Residenz owns the copyright on images so you can’t buy postcards of the interior anywhere else. I tried. These photos came off the internet. 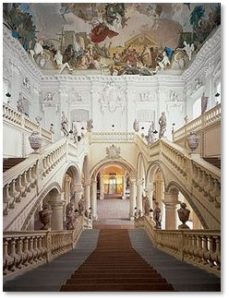 Grand Staircase, looking up from the mezzanine at the Tiepelo Ceiling

Next, we walked through an unassuming vestibule and through a door to the Grand Staircase. This leads the visitor to go from a small, dimly lit space into a large, brighter area dominated by the staircase leading up. This enormous structure of wide, flat stairs carpeted in red velvet has narrow risers. At a mezzanine, it divides in two sections, left and right, that take you up to the Imperial Hall.

Our guide said that people wearing voluminous heavy robes might have needed 45 minutes to ascend it. At the top of the stairs, she told us to look up.

The celling over the staircase has a flattened, giant cove vault without any additional supports. One of Herr Neuman’s rivals questioned whether this large, unsupported structure was stable enough to stand on its own. Little did he know. 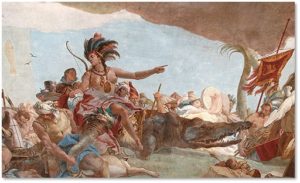 American – with Indian princess and alligator

The Prince-Bishop commissioned the famous Italian artists Giovanni Battista Tiepolo, to decorate the ceiling, along with his son. It  became the largest ceiling fresco in the world, measuring 18 by 30 meters (7,287 square feet).

Signore Tiepolo and his son, Domenico, painted the theme of “Apollo and the Continents,” placing people and animals from four continents (Europe, America, Africa and Asia) along the four walls.

The more uncivilized he considered the continent, the fewer clothes he gave the main figure. An “Indian princess” represents America, wearing only a feather headdress and bearing no resemblance to any indigenous tribe. The alligator is remarkably accurate, though, considering that Sig. Tiepolo had probably never seen one.

Olympian gods crowd the light-filled sky while figures appear to stand right on the cornice. A master of perspective, Sig. Tiepolo painted these figures as though they are real people looking down on the staircase. He worked with the Swiss stucco artist, Antonio Bossi, to create hand, legs, arms and whole enormous figures  that project from the two-dimensional painting into the room. 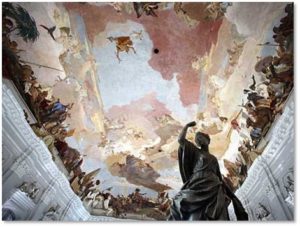 The fresco, in effect, arches over and embraces the viewer at the same time. This creates the effect of standing in a stage set. You don’t just look at the work, you become part of it. Theatrical, gorgeous, and seemingly three-dimensional, “Apollo and the Continents” is a masterwork of draftsmanship, foreshortening, composition and painting with gorgeous, saturated color.

The tour does not go through the entire palace but focuses on four or five of the most impressive rooms. These include the White Room, Antonio Bossi’s tour de force of stucco work. This color-free space rests the eye in preparation for the Imperial Hall that follows. Although smaller than the Grand Staircase, the Imperial Hall was decorated on walls and ceiling by the same two men in a style that pulls you in and makes the viewer part of the action. After that we saw the mirror room, with reverse-painted mirrors on the walls, and several others.

The good part about not being allowed to take photos is that it forces you to look — to really look — at what is in front of you instead of seeing beauty only through the lens of a camera. Besides, none of the photos can convey the scale, the artistry, and the sheer force of the frescoes on the Tiepelo ceiling. 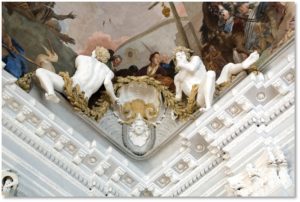 Corner of Asia and Europe with stucco figures

Fast forward from the 18th century to March 16, 1945. On that night, 225 Royal Air Force bombers dropped incendiary bombs that set fire to much of the city, reducing it to rubble. The RAF destroyed 90% of Würzburg in just 20 minutes. An exhibit at the end of the Residenz tour shows what the city looked like after it had been bombed to rubble.

In that firestorm of destruction, what happened to the Prince-Bishop’s Residenz, Sig. Tiepolo’s ceiling and M. Bossi’s stucco work?

I will continue with this fascinating story in tomorrow’s post on The Next Phase blog.