As I have said before, one finds interesting buildings in Boston just by looking up. That’s the best way to find a name, often carved in granite, shaped from brick, or fired in terra cotta that tells you the structure’s original owner or purpose. What commercial buildings do now in removable metal, glass, and LED lights, 19th-century owners put into the very fabric of the structure. Sometimes, though, you have to take a step back to look up. 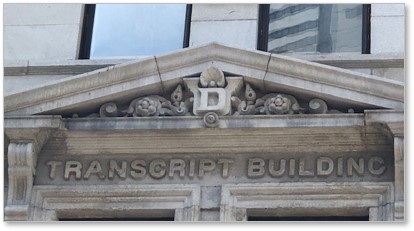 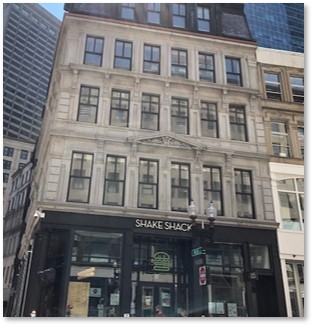 This was the headquarters of the Boston Evening Transcript, one of the city’s many newspapers in the day when print was the only source of information. Above that name, carved in granite, appears the cryptic letter D for the paper’s first publisher, Henry Dutton.

Washington Street was then Boston’s “Newspaper Row,” and home to all the city’s daily newspapers — a total of 15 daily papers published between 1830 and 1840. Through the mid- to late-eighteenth century, this area along the upper end of Washington Street was the “Cradle of American Journalism,” where you would find the headquarters of Boston’s most powerful newspapers. In addition to the Evening Transcript, it held the Globe, the Journal, the Herald, the Traveler, the Daily Advertiser, and the Boston Post. 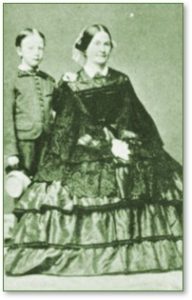 Cornelia Wells Walter, the paper’s theater critic and sister of original editor Lynde Walter, took over as editor upon his death in 1842. Only 27 at the time, Ms. Walter served in that position for five years and is recognized as the first female editor of a major daily newspaper. Never before had a woman held such a prestigious position for a large American publication.

The Transcript, a newspaper of record, also served a very useful function that is very relevant today. Its regular Genealogy Column, which ran twice a week or more for several decades in the early 20th century, provided an exchange of information among the scholarly genealogists of the time. It published many materials not available elsewhere.

For genealogists today, that information is available today through the Genealogy Bank. You can also find directions on how to use the Boston Evening Transcripts genealogy columns on the American Ancestors website. 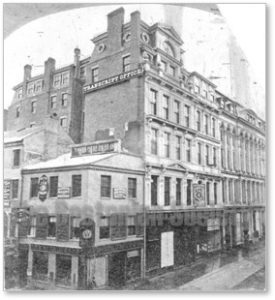 Built from 1873 – 1874, this second Transcript Building replaces the original, which was destroyed in the Great Fire of 1872. Flaming brands from the roof of that building set afire the steeple of the Old South Church, which was saved only by the intervention of Kearsage #3, an Amoskeag steam engine come to the rescue from Portsmouth, New Hampshire. It marked the northern extent of the burnt area.

The first Transcipt Building, only 12 years old, was completely gutted. The architectural partnership of Gridley J. Fox Bryant and Louis P. Rogers designed the second Transcript Building as a Mansard-roofed commercial block similar to those that defined Boston’s business districts—and almost identical in style. Larger in size, it reached all the way to corner on land formerly occupied by an old three-story building. 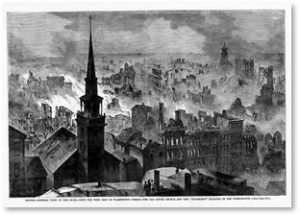 The Transcript Building, was constructed with reclaimed granite from the paper’s previous headquarters. On the Milk Street façade, it appears as a smaller-scale and somewhat restrained version of Mr. Bryant’s typically bold Second Empire–style designs. (See the Old City Hall on School Street.) The dormers and quoins suggest a central pavilion with flanking pavilions.

The repeated use of a Mansard roof in the Bryant and Rogers design is somewhat ironic in that this style helped to spread the flames in the Great Fire. As Stephanie Schorow reports in “Boston on Fire,”

“The mansard roofs were proving irresistible to the flames, and although the steam engines were chugging, the streams of water were weak and did not reach above the fourth floor to the fire that was spreading roof to roof.”