Aline Kaplan is a published author, a blogger, and a tour guide in Boston. She formerly had a career as a high-tech marketing and communications director. Aline writes and edits The Next Phase Blog, a social commentary blog that appears multiple times a week at aknextphase.com. She has published over 1,000 posts on a variety of subjects, from Boston history to science fiction movies, astronomical events to art museums. Under the name Aline Boucher Kaplan, she has had two science fiction novels (Khyren and World Spirits) published by Baen Books. Her short stories have appeared in anthologies published in the United States, Ireland, and Australia. Aline’s articles have also appeared on the Atlas Obscura website. She has been an active member of the Science Fiction and Fantasy Writers of America since 1988 and is a long-term member of the Spacecrafts science/fantasy writers’ group. As a tour guide, Aline leads architectural and historical walking tours of the city for Boston By Foot, ghost tours for Haunted Boston and historical bus tours of the city. She lectures on Boston history and has appeared in the Boston Globe, as well as on TV for Chronicle, an award-winning television program that broadcasts stories of New England. As a lecturer, Aline has spoken at Brandeis and Tufts universities for the Osher Lifelong Learning Institute. She has also addressed as service organizations and local meetings. She is a graduate of Northeastern University in Boston and lives in Hudson, MA. 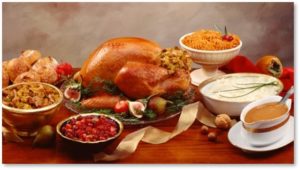 As if cooking for the whole family in our smaller, downsized kitchen isn’t work enough…

Still, that weekend we adopted a cat.

The Power of Grandchildren

My husband and I had been thinking about adopting a cat for a few weeks when two things happened:

Never underestimate the power of grandchildren. 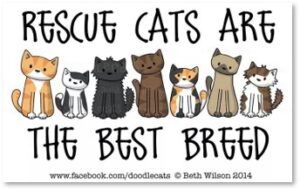 Of course, one thing led to another. We saw a few cats online that seemed likely candidates. I filled out some forms and sent them off into the ether. I got responses.

Then I had to provide references. Really. For a cat. I gave enough names of people who would testify that we are not cat-eating monsters to satisfy the shelters. On to the next step.

We had settled on a white female we saw online but she had been fostered out. The foster family wanted us to make our decision based on a Zoom call. But we feel that personal interaction is important for a pet and asked for that. They rejected our request.

A woman at CaRMaH, the Cat Rescue of Marlborough and Hudson, told us she had another cat and offered to come in and allow us to meet with him. She did, we did, and we mad the acquaintance of a three-year-old male tabby named Abbott. (More on that later.)

He was outgoing, affectionate, and personable. He even hopped right into the cat carrier on his own. Full disclosure, Mystique was a female and he was probably just intrigued by her scent. We zipped it up, wrote the check, and walked out with a new member of the family. I have not told him that he’s the backup cat. It’s a secret.

Hiding in the Dark 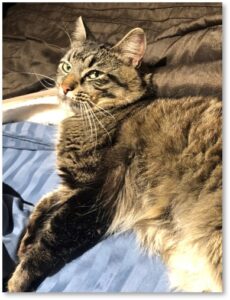 At home, the new member of our family emerged from the carrier and looked around, either confused or interested. Hard to tell. That night he came up on the bed while we were reading and curled up next to me. The next day, he vanished.

I looked all over the house, including behind, under and around furniture. We had closed several doors so he could be in only so many rooms, yet he seemed to inhabit none of them. I would have sworn he’d gotten out except that, short of transporter beam, it would have been impossible.

The next evening, the new cat poked his head out of the TV cabinet, where he had been hiding. Makes sense. The cabinet gave him a dark little cave that warmed up when we turned the TV on.

Now, Abbott is not a name I would give a cat but we have been struggling to find a replacement name. Many have been suggested by us, our children and grandchildren. None of them fit. (Gus, Thor, Fred, Mr. Pilkington, Leo) I know, I know: as soon as we start using a name, it will fit. But we just haven’t found the right one yet. 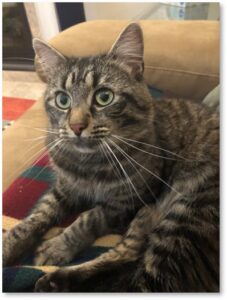 It’s an ongoing challenge but we will get there. In the meantime, our nameless cat, unbothered by lack of a moniker, is making himself comfortable. He mostly keeps to himself in the daytime and retreats to the TV cabinet at night.

But in the evening, he comes and sits with us as we read or watch TV. Curled In a strategic spot on the couch, precisely between the two of us, he graciously accepts all the stroking and affection we give him.

Eventually our nameless cat will discover the patches of warm winter sun in the dining room and the bird feeder just outside the sun room window. There’s nothing like watching the Bird Channel to draw feline attention, even if you can’t go outside to hunt.

At three, our Nameless Cat has many years ahead of him. Although he doesn’t know it, he will have better healthcare than millions of children around the world. He will never suffer food insecurity or endure life on the streets. He will have good things to eat, fleece blankets to lie on, pats and cuddles to relish, and a nice house that’s warm in the winter and cool in the summer. Our new cat will, of course, accept all of that as his due. It is the way of cats.

But, then, he earned it. If he had come out of that shelter cage skittish and shy or, worse, angry and aggressive, he would have stayed right there. New Cat played his cards right, though, and now he is reaping the benefits.

Welcome to our nameless cat. Suggestions are gratefully appreciated.