It’s winter and I’m in walking tour withdrawal. The Boston By Foot tour season officially ended in November, although we still do private tours for hardy groups. But my regular weekly schedule of at least one tour a week and sometimes more is as much of a memory as hot sunny days, children playing in the Greenway fountains, and Saints’ feasts in the North End. I gave a total of 35 tours in 2015, up from 20 the previous year, and I hope to do more in 2016.

Out and about in Paris

Every docent has a different style when giving tours. Some people deliver academic lectures. Others tell stories about the events. Some focus on facts and dates, architects and styles. I give a performance. One of the reasons I love the Dark Side of Boston tour is that it’s all stories. That allows me to act out roles, gesticulate, pantomime, walk funny, and otherwise get as involved as possible in the information I’m passing along. The “tourees” seem to like that approach.

I enjoy being in the city once a week, taking part in the urban bustle and seeing what’s new around town. I look forward to meeting people from around the country and all over the world. I like toshowing them parts of the city they would never ordinarily see as tourists. That also applies to the many local residents who come to learn more about a city and its history they may have taken for granted. It’s a pleasure to bring them along with me on a walk through time from 1688 to 1983 and on a mile-long route that goes up Copp’s Hill and down the other side.

What To Do Without Walking Tours?

During the winter hiatus when I’m not leading tours, I have been filling in with walking tours in other places. 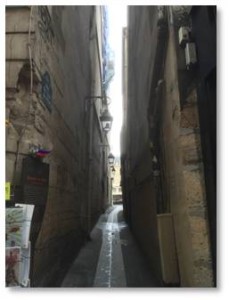 One of the Latin Quarter’s narrow Medieval streets

We went to France. Viking River Cruises offers many walking tours in the cities where the longship docks and I took advantage of most of them. In the space of a week, I went on two tours of Bordeaux (one long and one short), a tour of the Medieval towns of St. Emilion, Cadillac, and Bourg as well as a tour of the Citadelle de Blaye, a 17th-century fortress built by Louis XIV.

Unfortunately, because of a bad flight (hot, overcrowded, noisy) and the subsequent jet lag I overslept and missed the best tour of Bordeaux. That will teach me to set an alarm.The guides were all excellent and several were English, which made understanding easy.

On the first day of the three we spent in Paris, we took a walking tour of the Latin Quarter, also arranged by @VikingRiver. I was surprised to learn that the district’s name comes not from Spanish cantinas and flamenco music but from the La Sorbonne, France’s oldest university, where scholars from across Europe spoke Latin. It also includes the ruins of a Roman bath. So I got a good dose of history and architecture mixed with exercise and fresh air. Still, I was not leading the tour and there’s a difference. 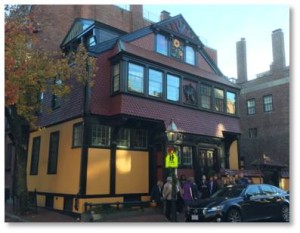 The Sunflower House on the Beacon Hill Flat tour

Back in Boston, I went on one of @BostonByFoot’s Tours of the Month, exploring the Beacon Hill Flat. It was held on a day when the whole neighborhood was out decorating for Christmas. Everywhere we went the shops, stores, and homes were putting up garlands, turning on lights, buying trees from the corner lot, hanging wreaths, and acting much like modern-day characters from Dickens’ “A Christmas Carol.”

To keep my tour guide skills sharp, I’m giving a Boston by Slide lecture on the Dark Side of Boston at Tufts University on March 11 to folks from the Osher Lifelong Learning Institute. This requires putting together a slide presentation, something I actually enjoy doing, and writing a script. The latter is easy because I build my own tour manual for each tour that I give. It helps me to learn the facts. As it happens, I had just updated my Dark Side manual and it now resembles an event continuity script only with a map as well as directions on where to stop and how to stand. 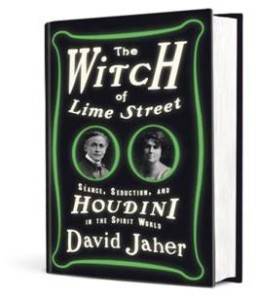 I’m also developing a Tour of the Month for October 2016 that I call Downtown Darkside. It includes stories of Bostonians behaving badly: hangings, murders, mystics, and Edgar Allen Poe. The route travels from Beacon Hill across the Boston Common to the South End. Writing the manual will take a lot of research but that’s part of the fun. I have already started by reading “The Witch of Lime Street” by David Jaher, a new book on the meeting of Harry Houdini and Boston’s reputed medium Mina Crandon.

There’s also a special-topic tour on the afternoon of January 17. Whether I go really depends on the weather. Clear and cold is okay, as long as it’s not too cold. The tour I gave in 16-degree weather in March is still vivid in my memory. Here’s a description of the “Ben Franklin: Son of Boston” Walking Tour, which will be given on his birthday:

Celebrate and learn about the life of Benjamin Franklin by walking among the sites of his homes and haunts in Colonial Boston. In his day, Benjamin Franklin was America’s greatest scientists, inventor, diplomat, humorist, statesman, and entrepreneur. Ben was born in Boston, came of age in Philadelphia, and was the darling of Paris. From his many inventions, creations of civic, philanthropic, and educational institutions, to his roles in the founding of America, his legacy is immeasurable.

At some point I also have to do some more research for my Boston’s Hidden Gems series as well as another series I have planned on animal statues in Boston.

As you can tell, staying busy is not a problem, even when I’m not out “on the road.” Winter will pass quickly.