“The Age of Aquarius demands that we hold a worldview that none of us is separate from one another, nor from the planet.”  ~ Andrew Lutts

Released in 1969, the Fifth Dimension’s Age of Aquarius invites us to believe a new world is possible. The lyrics spoke of change, the harmony of Jupiter and Mars aligning, even though we were under the dark cloud of the Viet Nam war. My generation wanted a world where peace would guide our planet and love would steer the stars. 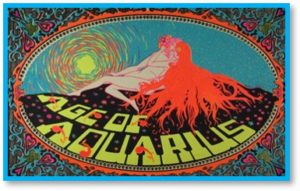 Forty years later curiosity sent me to the Internet to find out what, if anything, the phrase actually means. Much to my surprise and enlightenment, it’s a thing—an astronomical upheaval of galactic importance should we chose to embrace it.

Some astrologers believe The Age of Aquarius began centuries ago, while others say it is imminent if not already here. Its arrival predicts a disruption in society, triggering the rise and fall of civilizations and global consciousness.

Is this the dawning of the Age of Aquarius?

Look to the Stars 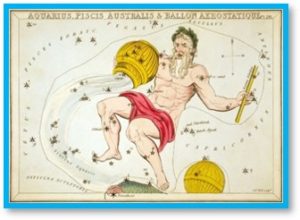 Aquarius is the 11th sign of the zodiac (Jan. 20 – Feb. 18), which the Sun passes from mid-February to mid-March. It is the 10th largest constellation in the sky and its name is Latin for water-carrier. One of the oldest of the recognized constellations in the zodiac, Aquarius is located in the area known as the water or sea section of the sky.

The Greeks linked this constellation with Ganymede who, according to legend, was a handsome young man and the object of Zeus’ affection. Zeus brought him to Mount Olympus, where he served as cupbearer to the gods and received the gift of eternal youth. Nice work if you can get it.

Despite its symbolism, Aquarius is an air sign, aligned with communication, movement, and change. The image of Ganymede pouring water from a vessel represents washing away the past to make room for the new. In Babylonia, astronomers identified the constellation as the god Ea, or The Great One. Ancient Egyptians believed the water bearer’s jar caused the spring overflow of the Nile when dipped into the river.

Aquarius is ruled by the planet Uranus, also called the Great Awakener; believed to possess energy, resources, and imagination, and a bit of unpredictability. This planet flaunts established rules and challenges behavior patterns, resulting in profound and far-reaching change. Uranus does not respect convention and tradition, dismissing it when it outlives its usefulness.

Those born under the sign of the water bearer have a strong desire for independence and excitement. They are highly intellectual and love helping others, seeing without judgement or prejudice. Aquarians are visionaries, guiding technology and innovation to bigger, better discoveries. Considered problem solvers, they are at their best in a group and adapt to the energy that surrounds them.

People born under this zodiac sign believe in a world full of possibilities.

An astrological age, in this case Aquarius, refers to the position of the Sun in relation to the background constellations at the time of the vernal or spring equinox. Occurring on March 20-22 of every year it is the point at which the Sun’s arc across the sky shifts from the southern to the northern hemisphere, marking the beginning of spring in the north and autumn in the south. The constellation behind the Sun at the vernal equinox is Pisces, the fish. 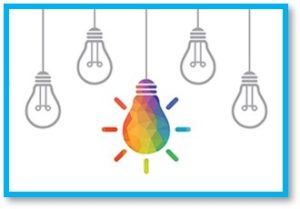 Astrologers believe the movement of the vernal equinox across this imaginary border on the celestial sphere will bring great upheaval to human society, causing the rise and fall of civilizations and bring a rebirth of global awareness.

Countering that line of thinking, scientists dismiss astrology, claiming the movements of planets within our solar system have no effect on the course of human lives. Hundreds of scientific studies show the predictive powers of star charts, birth signs, and astrology readings are nothing more than random chance.

Now science, in this case the Sun’s uneven gravity, pulls on the hemispheres and creates a circular wobble in the earth’s axis of rotation. The scientific term is precession of the equinoxes, a change in the orientation of the earth’s rotational axis where the north and south poles move in a gradual circle (think gyroscope) over a period of 25,772 years. In a few hundred years, Polaris will no longer be our North Pole star, since the northern axis will shift a few degrees along this circle.

This means the constellation behind the Sun at the time of the vernal equinox will change, as the plane of the equator shifts along with the Earth’s axis.

The constellation after Pisces will be Aquarius.

Many astrologers feel we are already in the Age of Aquarius and will remain for the next 2,150 years. Although the precise time is debatable, the Sun’s position at the vernal equinox, moving from Pisces into Aquarius, marks the beginning. The actual start time spans centuries, with some saying nothing will happen until the 25th Century, while others believe it is happening now. 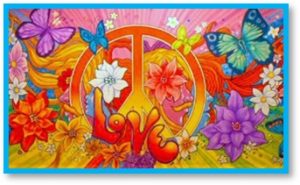 I come down somewhere in the middle of the argument, erring on the side of science but admitting to a fascination with astrology. The world as we know it is but a fraction of what science has discovered. I believe anything is possible.

I lean on the words of the Old Bard himself, William Shakespeare, who reminds Brutus and us, “The fault is not in our stars, but in ourselves.”