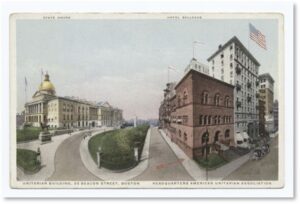 People and organizations move around Boston all the time. Old, cramped buildings give way to new and modern structures that better serve their residents and employees. For the American Unitarian Universalist Association (UUA), this has happened twice and the first time they took their address with them.

The organization’s second building, at 25 Beacon Street, confuses new postal delivery people, located as it is between 31 and 35 Beacon Street. In time-honored Boston fashion, you just have to know the reason. Once you know it, however, you can only acknowledge that it’s wicked typical of how things are sometimes done in Boston. 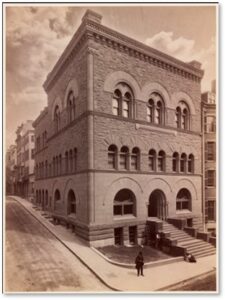 The American Unitarian Association (AUA) opened its first headquarters in Boston in 1865, forty years after the organization was founded. The AUA occupied several locations but eventually took residence in a Richardsonian Romanesque building on the corner of Beacon Street and Bowdoin Street.

Multiple round arches over windows and doors, along with multicolored stone, give the cube-shaped three-story structure, had an unquestionably Richardsonian Romanesque style. This building, no longer extant is not listed among the work of either Henry Hobson Richardson or Shepley, Rutan and Coolidge. One of the other spin-off practices may have designed it, however.

The American Unitarian Association sold this building in 1925 and purchased 32 Beacon Street. At the time, this was at the time tucked sedately between #31 and #35. They built the new headquarters in its place, on land once owned by John Hancock, a Unitarian who worshiped at the Brattle Square Church. They took occupancy in 1927. 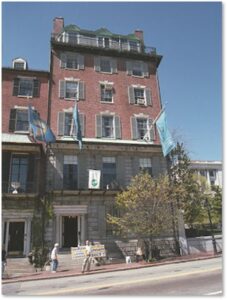 The Federalist structure fits right in with Beacon Hill’s earlier buildings and the nearby Massachusetts State House designed by Charles Bulfinch, another Unitarian. One might easily think it went back to the 18th or 19th centuries. But it was actually not built until the beginning of the 20th century.

The AUA was so attached to the earlier address, however, they petitioned the State Legislature to allow them to keep it. The State House passed it and the new #25 took its place out of numerical sequence on Beacon Street by legislative act.

Although relatively new, the structure occupies a location filled with both Boston and Unitarian history. It shares a wall with the Parkman House, the mayor’s official guest residence, on the west. The Massachusetts State House and grounds stretch to the right. It’s just down the hill from the memorial honoring Robert Gould Shaw, the Union officer, and Unitarian, who led the Massachusetts 54th Regiment in the Civil War.

This building served the AUA for many years but eventually became outdated. Although 25 Beacon Street, along with the Pickett and Eliot guest houses behind it, had great sentimental value, they no longer worked efficiently for an active organization. Employees struggled with many challenges. The vertical structure had old wiring, no air conditioning, glitchy internet connections, poor face-to-face communications, and limited accessibility. Also, the building’s necessary renovations would have cost millions to bring it into the current century. 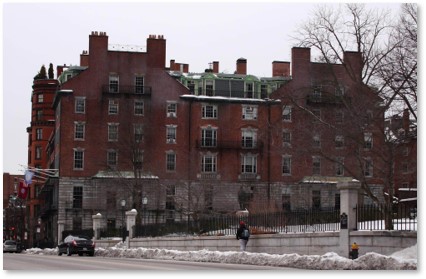 Eventually, the Unitarian Universalist Association sold the building to a developer who has since turned it into six townhouses. The residences at 25 Beacon Street sell for six or seven figures. 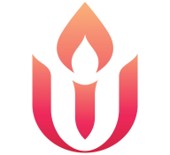 In 2014, the UUA moved from its perch on Beacon Hill to 24 Farnsworth Street in the Fort Point Channel district. The “new” building—actually a 1915 Boston Wharf Company warehouse—was built out to their specifications.

This time, however, the old address stayed on Beacon Hill.