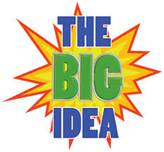 Every once in a while, I get a bright idea and it usually comes from putting two disparate things together. It happened yesterday—bango, flash of light, drum roll—Big Idea!

Anyone who listens to the news, pays attention to business trends, or follows Mike Combs and Dan Chmielewski on Facebook knows two things:

1. Although the economy has recovered a lot from the inception of the Great Recession in 2008, we still don’t have enough jobs.

The unemployment rate has dropped 3 percent since the black days of 2009 and that has helped a great deal, but millions of people are still unemployed and millions more have dropped out of the work force. When 26,000 people apply for 600 jobs at Walmart, you know the problem remains acute. Walmart is, after all, the poster child for low wages, poor benefits and greedy management, so why would anyone want to work there if better alternatives existed? 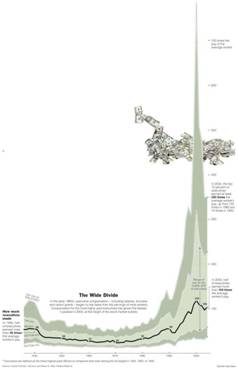 2. There is a huge gap between what CEOs of American companies are paid and the median wage of the workers at their companies. American CEOs now make 273 times the pay of the average worker, not even the median worker’s salary.  In the chart to the right, the black line is the median.

This gap in the pay ratio is larger than in any other developed country and has been called both outrageous and obscene. It is a tribute to the greed, arrogance and callousness of American executive ranks. It is also directly tied to #1 because, when there aren’t enough jobs, workers have no negotiating power. You take whatever job you can get and keep your mouth shut because you can’t afford to lose what little security you have.

The question has been, “What can we do about it?”

When businessmen are asked what is required to get businesses to start growing and hiring again, the answer typically is to lower the corporate tax rate. A recent study proved that lowering the corporate tax rate doesn’t create jobs but that is still the mantra being chanted by CEOs who want to add to cash accounts that are already stuffed to bursting. This makes perfect sense because lowering the tax rate improves the company’s profit margins and that translates to even higher pay for them.

What could be simpler than that?

The KSTS would give greedy CEOs a real incentive to act more responsibly. They do, after all, have a fiduciary responsibility to their shareholders and lowering the corporate tax rate improves the return for investors.

First, we would have to eliminate all tax breaks, subsidies and other incentives for corporations large and small to level the playing field. Corporate executives hate a level playing field, of course. They much prefer one that is tilted (heavily) to their advantage. But it’s difficult to argue that you oppose reducing corporate tax rates.

Second, we create a scale with different tax rates at different CEO pay ratios, using the ratios in different countries as a starting point. For example: 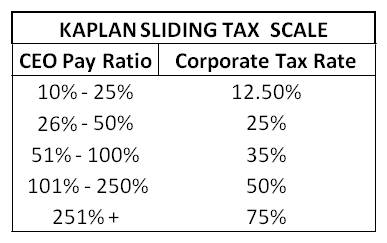 Now, I’m not an economist, econometrician, financial guru or even an MBA. I’m just a Liberal Arts major with an idea so some readers might jump up and wave their hands and yell, “You can’t do that!” or “Those rates are way too high!” or “That would drive a company out of business!” Fair enough.

What I think would happen, though, is this:

And, no, implementing my Big Idea would not drive corporations out of business. Most of them are sitting on enormous piles of cash right now. They aren’t using it to grow the company, to expand operations, to give their employees higher wages or to create jobs. They’re just sitting on it and they need an incentive to start putting it to good use. The Kaplan Sliding Tax Scale would give them one. At the same time, it would:

Would the KSTS help create corporate jobs? I’m not sure but pumping more money into the economy would sure help increase jobs in services, entertainment, hospitality, travel and other related industries.

That’s it. Some people might consider the Kaplan Sliding Tax Scale draconian but I think it’s just common sense. Sure, the tax rates can be adjusted downward — as long as the tax rate at the top end of the CEO pay scale remains punitively high.

If you like this idea, please pass it on. Like and Share it on Facebook, reTweet it, and send it to your friends. Maybe if the KSTS gets some real visibility, our Do-Nothing Congress will sit up and pay attention.