I have written before about the sociopaths who live among us, protected by the normality bias. This mindset drives most people to believe that our society is made up of “normal” people just like us. Even in the face of demonstrated evidence to the contrary, we want to—need to—accept people as normal and this requires that we dismiss or ignore their aberrant behavior. This topic taken on more importance as the 2016 presidential campaign plays out. 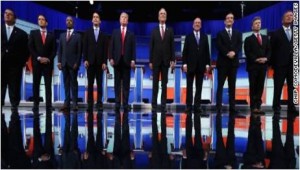 Stanley C. Loewen in Health Guidance gives us the major characteristics of a sociopath. A person does not have to exhibit every single one to qualify. These traits match those given by other doctors in other places although lists may differ in their definitions or level of importance. I’m using this list because it’s simple and clearly written.

18 Qualities of a Sociopath

“Someone who is described as a sociopath will have several traits that set them apart from those with no personality disorders. These traits include the following.

Sociopaths of course vary in their symptoms and might act differently in different cases. However their main trait is presenting themselves as having the same empathy feelings and emotions as others when in fact they lack this emotional capacity. They are thus cold and manipulative and rarely see any problem with their actions.”

Got that? Now let’s look at the major candidates—11 Republicans and three Democrats—in alphabetical order. I created a spreadsheet that we can use to rank them. WordPress doesn’t accept spreadsheets very well, though. If you really want to fill out the chart, let me know and I’ll email a copy to you. 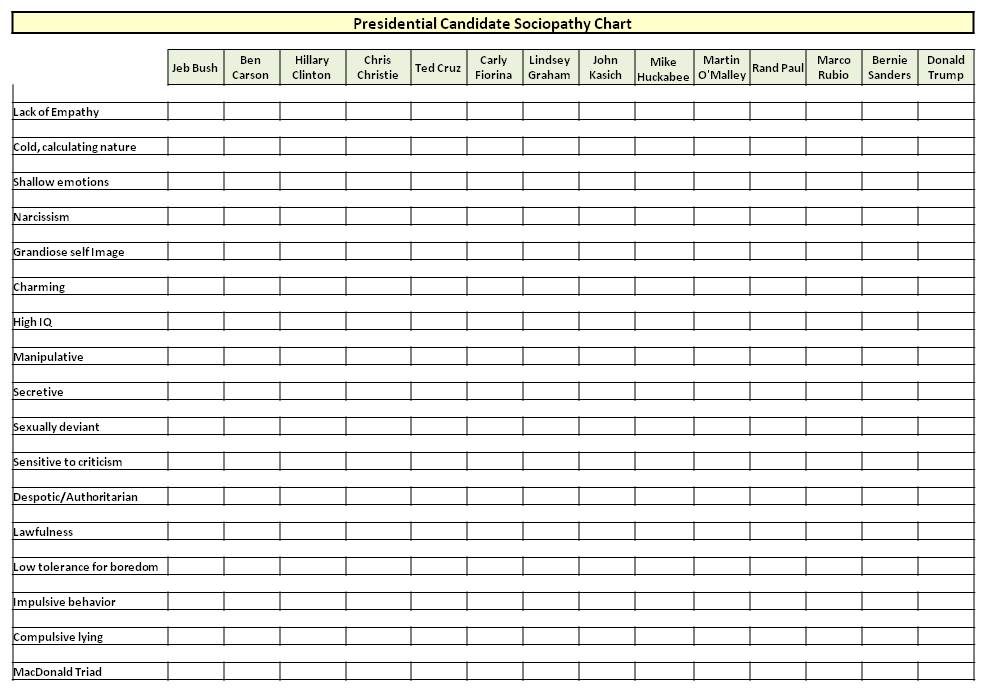 Some of the chart’s categories are almost a slam-dunk. One might argue, with the ample support of history, that any presidential candidate must by definition be narcissistic and have a grandiose self image. How else to survive the brutal attacks from other candidates and the media? Or even to think you’re suitable for the job? Also, we want candidates to have a high IQ and we sort of expect politicians to be manipulative, don’t we?

Because “compulsive lying” is subject to interpretation, though, not to mention propaganda, I urge you to check out Politifact’s Truth-O-Meter’s scores for what the candidates are saying. Politifact hasn’t updated the overall scores since June of this year, however, and a lot of debate comments have raced under the bridge since then so I couldn’t add those numbers to the chart.

That accounts for five of the 18 qualities. But, still, all those others are really important, aren’t they? We should think seriously about connecting the dots on the person we plan to vote for—the one who will sit in the Oval Office for four years. 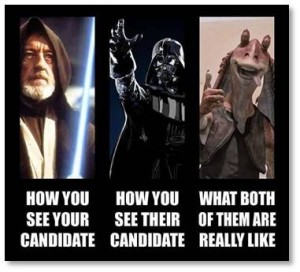 I have my own opinions, of course. Therefore, I divide the candidates into four categories:

I think at least two of the Republican candidates have higher sociopathy scores than I would want in any individual leading the country. That’s more than I think is healthy for the pool of candidates who want to lead the most powerful nation on the planet and who have weapons of mass destruction at hand.

The 2016 Presidential campaign is important. Despite the behavior of some of the candidates and at least one of the news networks, we should not treat it like a season of Survivor, Celebrity Apprentice or American Idol. We should not expect the President of the United States to be a performer, a rock star, or a comedian. If he screws up in office, we can’t just vote him off the island.

The Iowa caucus is on February 1 and the New Hampshire primary election runs eight days later. The next time you listen to a stump speech or a debate as yourself not only whether you agree with the candidate’s positions or even whether he or she is simply lying. Ask instead whether you think the candidate’s behavior is normal.

A lot depends on the answer.