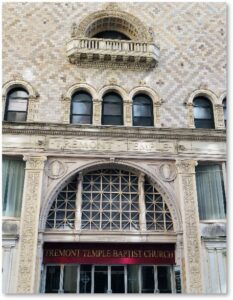 It stands on city block filled with historical buildings, both old and modern. Wedged between two other structures, the Tremont Temple rises eight floors and presents a challenge to any pedestrian attempting to take in its elaborate architectural details and ornamentation.

But if you stand across the street and take your time, you will see some pretty interesting things. Just watch out for pedestrians hurrying past. 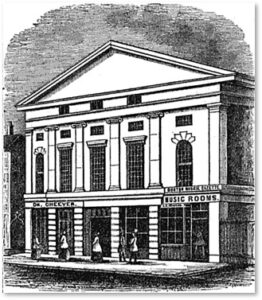 The Tremont Temple began life in 1828 as a theater—although that was a much smaller building. Isaiah Rogers designed it in the Greek Revival Style. That theater rose Phoenix-like from the ashes of at least three fires (1852, 1879 and 1893) before finally being purchased and replaced.

The performances and lectures held there had connections to women’s suffrage, the Free-Soil Movement, abolition, and literary drama. Speakers and performers on its stage included: 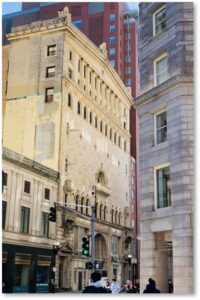 The Baptist Church acquired this original building in 1843 and adapted it for religious use but continued to hold secular events in its auditorium. This was Boston’s first integrated church. The congregation decided to replace it in the latter part of the 19th century.

Blackall and Newton—you can’t set foot in a theater around Boston without bumping into the prolific Clarence Blackall—designed the current eight-story building in 1896 in the Renaissance Revival style with a Greek Revival top. The façade reminds me of a Venetian palazzo – ca’ Tremont, if you will. Too bad it’s not closer to Canal Street.

This new structure was intended to be a church that included an auditorium. It held retail shops on the ground level and offices above for businesses to lease—a popular way of raising money to support the church functions. Revenue from those rents as well as auditorium rentals for concerts and lectures enabled the church to provide free seats to all worshippers.

This building has such a rich and storied history that it would be difficult to fit it all into one blog post. So, I’m focusing on the structure itself.

The golden diamond-pattern stonework of Venetian design adds light to the crowded block. When the morning sun hits it, the façade lights up the street. As the details need some time to take in, I offer a quick overview.

Blackall and Newton packed most of the detail and ornament into the ground floor and the top two floors. Here at street level, you’ll see: 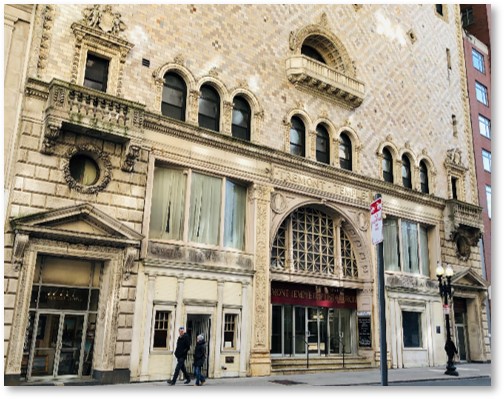 The golden stonework fills the middle layers with the surface broken in only a few places.

The two floors above that line have groups of nine windows separated by Ionic columns. The Greek pediment with dentils stands atop the whole thing with acanthus-leaf decorations in the center and on each corner. Because the building is tall and Tremont Street is narrow, though, you may have trouble standing back far enough to see the temple’s top.

Those are the main elements, although other, smaller decorations and windows appear. Mr. Blackall did not stint on design. The congregation of Tremont Temple Baptist Church continues to occupy the building today at 88 Tremont Street.