At a time when global instability is worsening, when the threat of Covid-19 is giving way to a hot war in Ukraine, when American’s Democracy is under threat, I decided to tune out and go for a walk. It was a beautiful day — sunny and seventy degrees. (Today, it’s cold and snowing: we’ll get a foot or more.) This is New England. 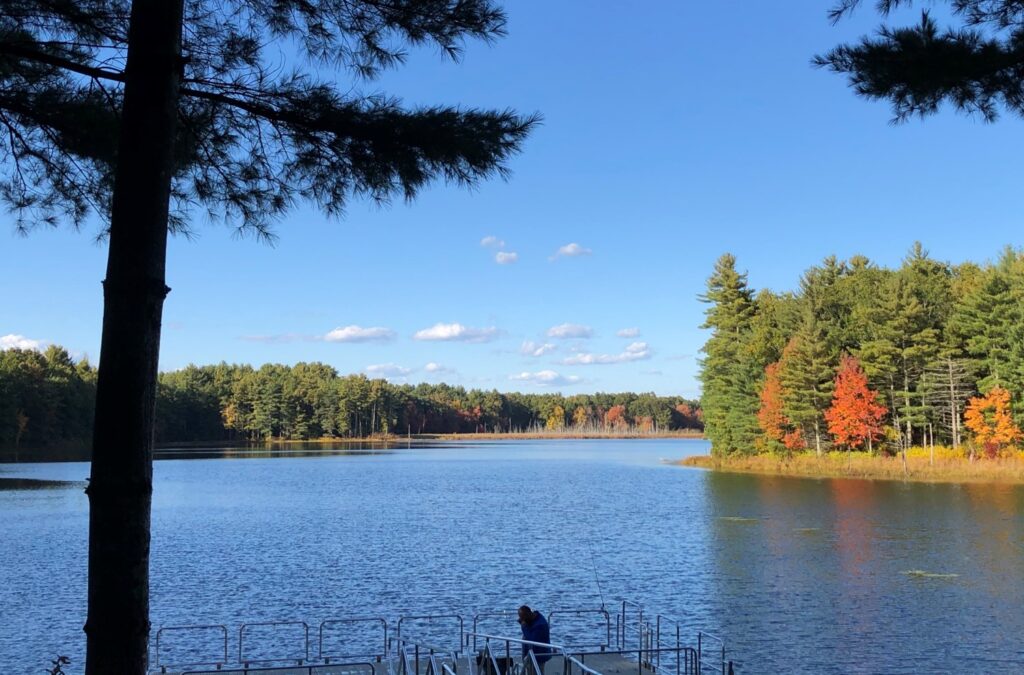 Puffer Pond in the fall

While some of our neighbors stroll around the condo complex, I prefer the woods. Winter offers a perfect time to walk in the woods: no mosquitoes, black flies or no-see-ums to pester you. Fortunately, we live a five-minute drive from the Assabet River National Wildlife Refuge. 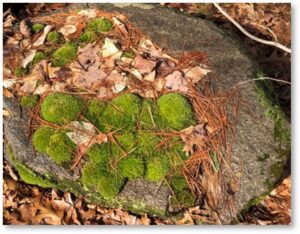 A conservation area of three and a half square miles, this reserve functions like a park. Instead of mowed lawns, however, it offers woods, ponds instead of fountains, and trails instead of concrete.

The area once held about 40 farms and homes that belonged to the towns of Maynard, Stow, Hudson, and Sudbury. The United States Army took over those lands by eminent domain in 1942 and turned the combined area into the Sudbury Training Annex, a part of Fort Devens.

How the Army Misused the Annex

The Army used the annex to store ammunition for WWII as well as for training personnel. In the fifties, they started dumping waste from their Natick Laboratories. Back then this area would have been considered the boonies—far from settled areas.  So why not throw all your trash and pollutants there?

It did not concern the Army that an estimated 35,700 people get their drinking water from public and private wells within three miles of the waste areas. Or that White Pond—three miles downstream of a pit that held laboratory solvents—formerly provided drinking water to Maynard’s 12,000 residents.

This rampant contamination continued until the early eighties, when the Army began using the Annex to train personnel for various units. Army Reservists most recently used the Sudbury Annex for field troop training during Operation Desert Storm in 1991. One can only speculate why they thought a temperate Massachusetts forest and wetland resembled the Kuwaiti desert in any way that could be of tactical value.

An oil spill in 1985 alerted the Army to the possibility of pollution at the Annex, including groundwater and soil. An investigation a year later confirmed this suspicion and identified the primary contaminants as volatile organic contaminants (VOCs) and pesticides. What to do? The government placed the site on the Superfund National Priority List in 1989. 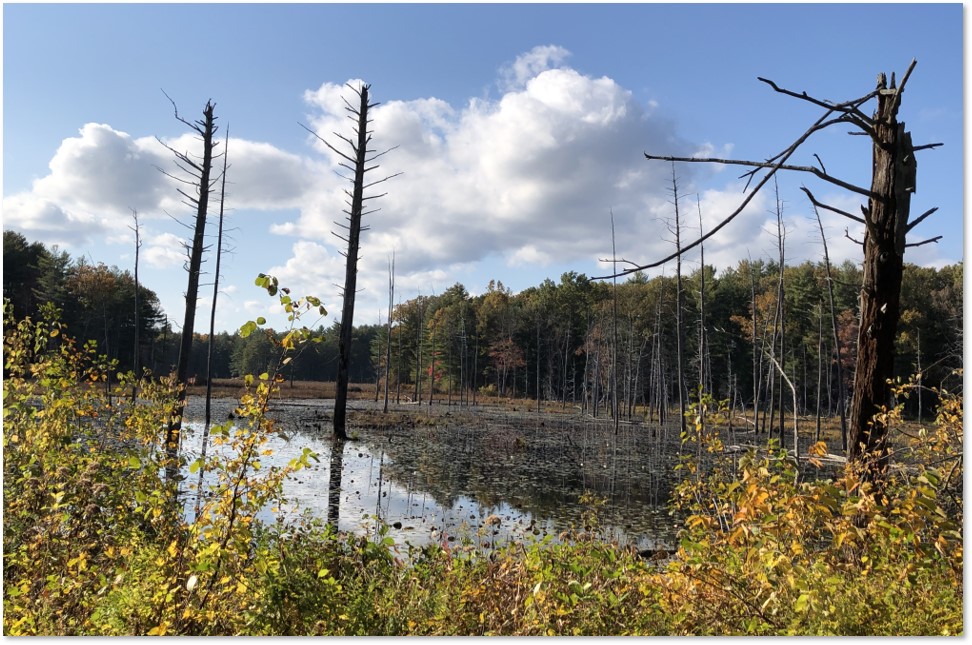 The nine-year Superfund cleanup that followed removed underground storage tanks, and gallons of poison along with tons of contaminated soil and creek sediments. Once the worst toxins had been taken away, the U.S. Army transferred 2,332 acres to the U.S. Fish and Wildlife Service in the fall of 2000.

You would never know any of this when walking there today. The Assabet River National Wildlife Refuge has both large and small wetland areas, vernal pools, and large forested areas. These provide important feeding and breeding areas for migratory birds and other wildlife. The Wildlife Service manages these lands for conservation of migratory birds. It also has chain-link fences, concrete bunkers, and some asphalt roads — left by the Army.

Ferns, grasses, and a yellow tree

Of most importance to me, it offers 15 miles of public trails (half are open to biking) as well as a visitor center and (also important) outdoor toilets. Two docks extend into Puffer Pond, providing better views of the water and the opposite shore. Many people cast a line here for sunfish and pickerel, although it’s catch-and-release only. You wouldn’t want to eat anything that came out of this watershed.

I love these trails because they are quiet and beautiful. I can choose to walk uphill, around a pond, straight from one end to the other, or a combination, depending on how much exercise I want. 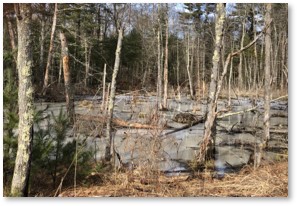 The trails and their views change with the seasons. So do the sounds and scents. Spring Peepers come out in the vernal pools at dusk to sing their songs. Canada geese settle onto the water in the fall. I wish I could say I’ve seen a lot of wildlife there, but not so much. At least, not yet.

Yesterday, I took a long route from end to end, doing both the Hill Trail and the Puffer Pond loop. Because it had rained the night before, the woods smelled of wet leaves and soil, a wonderful loamy aroma. Everything seemed to have more vivid colors. The recent rain and snowmelt had raised water levels, so I checked the trail maps to see which areas were flooded and planned my walk accordingly. 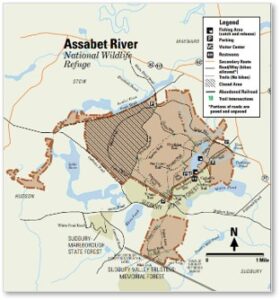 I always see lots of people here. Because this is school vacation week, families walked with their kids. Older people take strolls. Runners run, bikers bike, and fishermen fish. No dogs are allowed.

The ARNWR started as woods, became farms, was blighted by military expediency, and has now returned to forest.  When I want to walk, that’s where I go.