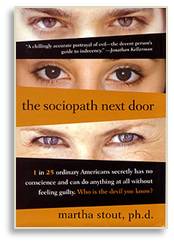 To make this a Trifecta, I’ll finish up the last week’s focus on mental health issues by discussing a book I read many years ago but which has had a strong influence on how I see the behavior of others around me.  In “The Sociopath Next Door” Dr. Martha Stout estimates that 4 percent of “ordinary” people, one in 25, can be classified as sociopaths. What does this mean?  First and foremost, it means that they have no conscience. They can do whatever they want and feel no guilt or remorse whatsoever.  In case you’re thinking that sociopaths are all serial killers, rapists, and child abductors, nothing could be further from the truth. They are everywhere, in every industry, profession, calling and walk of life. They live in the same world you do but their reality is very, very different.

When I first read this statistic, along with Dr. Stout’s descriptions of sociopathic personalities, it occurred to me that I must know people like this.  In fact,I probably worked with some of them.  And as soon as I realized that, the names came flooding in. The people who behaved in inexplicable and appalling ways, the ones who seemed to enjoy causing confusion and difficulty, who manipulated people to his/her benefit with no regard for the consequences to others, who took pleasure in creating discomfiture or even real fear. You know, the ones about whom you have asked yourself and colleagues, “How could he/she do something like that?”Here’s how Dr. Stout describes a sociopath in the business world:

“Maybe you cannot be the CEO of a multinational corporation, but you can frighten a few people, or cause them to scurry around like chickens, or steal from them, or—best of all—create situations that cause them to feel bad about themselves.  And this is power, especially when the people you manipulate are superior to you in some way.  Most invigorating of all is to bring down people who are smarter or more accomplished than you, or perhaps classier, more attractive or popular or morally admirable.  This is not only good fun; it is existential vengeance.  And without a conscience, it is amazingly easy to do.  You quietly lie to the boss or to the boss’s boss, cry some crocodile tears, or sabotage a coworker’s project, or gaslight a patient (or a child), bait people with promises, or provide a little misinformation that will never be traced back to you.”

They Can Be CEO 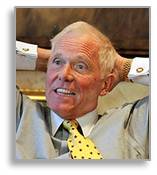 Sometimes, of course, they can be the CEO or its equivalent. Think of Bernie Madoff, who stole from people of his own faith and defrauded charities. He was a hero and a billionaire until it all crashed down around him. Or Robert Campeau, who was given power and money despite a spectacular lack of qualifications and bankrupted 250+ profitable department stores.  His career began with forged documents.  Or “Chainsaw Al” Dunlap, who earned his nickname by making a career of ripping through companies, laying off thousands of hardworking and dedicated employees. Wall Street rewarded his “turn-arounds” with higher valuations and stock prices.  He claimed to tell only the brutal truth but, ultimately, the resume that gave him access to such power was exposed as fraudulent–his own big lie. The connection is so strong that in June of 2011, Forbes magazine published an article called “Why (Some) Psychopaths Make Great CEOs.”  In it, British Journalist Jon Ronson says of Mr. Dunlap:

“There was his reputation that he was a man who seemed to enjoy firing people, not to mention the stories from his first marriage — telling his first wife he wanted to know what human flesh tastes like, not going to his parents’ funerals. Then you realize that because of this dysfunctional capitalistic society we live in those things were positives. He was hailed and given high-powered jobs, and the more ruthlessly his administration behaved, the more his share price shot up.”

Unlike the people in my posts about untreated, seriously mentally ill people, or unacknowledged and unmedicated co-workers, sociopaths are not treatable.  No psycho-pharmacological regimen can grow them a conscience and neurosurgery can’t implant empathy for others. The best way to protect yourself from a sociopath in the workplace (or anywhere) is to avoid denial and acknowledge their presence. Dr. Stout offers this advice:

THIRTEEN RULES FOR DEALING WITH SOCIOPATHS IN EVERYDAY LIFE

(The book provides more detail for each of the 13 points.)

The late Ian Fleming, creator of James Bond, said it more succinctly:  “Once is happenstance. Twice is coincidence.  Three times is enemy action.” The sociopaths among us may not plot destruction from a laboratory atop an alpine peak, or stroke a white cat while they issue orders to heavily armed underlings but that does not make them any less destructive to those who are trapped in the same workplace. When detecting a sociopath, the first clue is typically asking that question, “Why would he/she do something like that?”  When the red flag goes up I have my own three rules: