How good is science fiction at predicting the future—particularly future technology?  Should mainstream scientists be looking more carefully at science fiction for ideas and direction? Or are scientists too conservative to make big leaps?

A few weeks ago the Boston Globe ran an article called “Designing for a Science Fiction Future,” by Kelly O’Brien. In it she reports on a pamphlet by Julian Bleecker of the University of Washington that explores, “the relationship between science fiction, particularly the 2002 movie ‘Minority Report,’ and technological progress.” 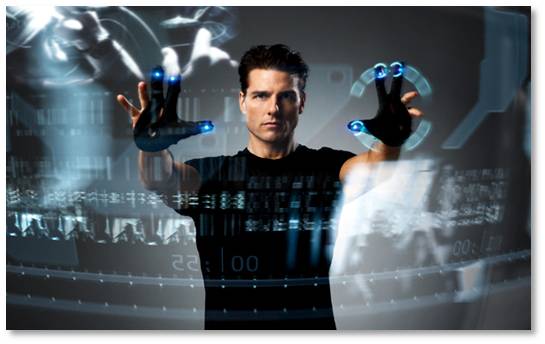 Mr. Bleecker watched Tom Cruise manipulate future tech like a conductor: “Bits of video disappear at the sweep of his arm or pause when he makes a referee’s ‘time-out’ signal with his hands.” He concluded that “The imagined technology was so appealing that companies are still pursuing less-than-convincing facsimiles.”

If so, I applaud both the movie’s special effects team and the inventors trying to replicate their work. As someone who reads and writes science fiction, and who has been an active member of the Science Fiction and Fantasy Writers of America for many years, I found this topic interesting for several reasons.

First is that the movie ‘Minority Report’ is 14 years old. That’s a bit long in the tooth when it comes to speculative fiction or any tech derived from it. Oh, and “The Minority Report,” the short story by Philip K. Dick on which it was based was published in 1956. Whatever. Mr. Bleecker uses the movie to demonstrate how imaginary technology can be so inspiring it drives inventors to create the real thing.

Future Technology I Could Use 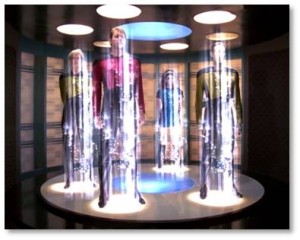 How I wish this was true. Then I could step into a Transporter and get beamed to the west coast instead of cramming myself into a flying sardine can for six hours. I’d arrive almost instantaneously and perhaps a little disoriented instead of cramped, exhausted, dehydrated and disheveled.

I would entrust my calendar and social life to a protocol droid who would handle all the details for me. Or I could take a shuttle up to an orbital station, get put into suspended animation, and sleep all the way to an extended vacation on Mars.

Closer to home, I could use my hovercar to fly over snow and ice all the way into Boston and then find an actual parking spot, pre-shoveled, that doesn’t have a lawn chair in it. Maybe I could blast the lawn chair with a phaser.

The truth is that science fiction is notoriously bad at predicting technology. I’m not talking about predicting the future—whether it’s going to be Big Brother or Starfleet Academy. Nope, just the tools and devices that we’ll be using.

A Dearth of Future Technology

Back in 2014, Peter Hamilton noted in The New Republic that accurate predictions can be counted in the single numbers—and that wasn’t just for technology. In his article, “Can Science Fiction Writers Predict Technology’s Future?” he had to go all the way back to Grand Masters like H.G. Wells, Robert Heinlein and Arthur C. Clarke for examples.

Popular Mechanics was more optimistic with “Seven Gadget Predictions Sci Fi Authors Got Right,” they list ubiquitous tech devices from tablets to the World Wide Web along with which author and work made the prediction. And Tested added 10 more “Predictions Made by Sci-Fi Writers.” This is better but, still, it’s just a handful.

Now it seems that Ari Popper founded a consultancy called SciFutures with the goal of productizing design fiction. He and his partner, Scott Susskind, put together a stable of science fiction authors who “write their own sci-fi stories as a way to think through new technologies, products or business models.” Mr. Popper believes that this is new and different “because it relies on clients to create their own vision of the future  . . “

Well, that would be good.  But when SciFutures worked with Lowe’s Home Improvement they came up with a future where “Lowe’s shoppers came to the store and interacted with artificially intelligent robots instead of salespeople.”

Isn’t that what we do today? Oh, right, that’s only at the checkout counter — and human beings still have to help out. Now, the idea of AI robots isn’t exactly brand new. Plus, it’s not something that most ordinary shoppers would request or include in their personal vision of the future. Is this cutting-edge thinking? Not hardly. And speaking of cutting edge, would you really want an AI robot helping you to cut the right length of wallboard bead or snip off just enough heavy-duty chain? Low-budget horror movies have been made from less.

Is science fiction just focused on other things, with technology as a supporting player? (Pay no attention to that tech behind the curtain.) Except for Neal Stephenson, writers are more focused on plot, characterization, story arc, dramatic tension, conflict, style, and any number of other factors.

Or are scientists and inventors too focused on what seems possible to see beyond the obvious?

More on this tomorrow.