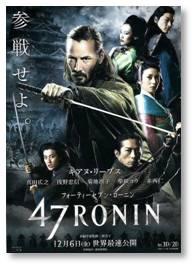 I can’t say enough good things about this tale of courage, retribution, revenge and Bushido in feudal Japan. In 47 Ronin, Akira Kurosawa meets Hayao Miyazaki. Think The Seven Samurai with Hollywood production values and Princess Mononoke in real-life. I liked it a great deal not least because it was so different—thus far less predictable—than virtually all of the movies that come out of Hollywood these days. Unfortunately, the theater was practically empty on a Friday night, which is a shame because this movie deserves better traffic than it is getting.

In the few reviews that have been written, the critics hated 47 Ronin. Why? Three reasons:

I often don’t even read reviews of science fiction or fantasy movies written by the major critics because I know that they will either (a) dismiss it out of hand, or (b) snicker their way through. Often they give away the entire plot, too, as Mark Jenkins did in his Washington Post review, “Keanu Reeves stars in dull retelling of Japanese fable,” which, fortunately, I read only after I had seen the movie. Mr. Jenkins claims on the one hand that the movie has no real Japanese character, yet he quickly demonstrates his lack of understanding of Japanese folklore.

The fact is that Japanese folklore contains a wonderfully rich set of demons, dragons, shape-changers, mystical people and fantastic creatures. You can see whole armies of them in Mr. Miyazaki’s movies, such as Princess Mononoke and Spirited Away. These movies are so fresh, so different from European fairy tales and American folklore that they are enchanting. One never knows what’s going to happen next because all the worn Western tropes have been thrown away and replaced with new and—to us at least—highly original Eastern story lines. Hooray for that!

But What Do Audiences Think?

When you put all three reasons together, you understand why the critics turned up their collective noses.

So, do audiences like 47 Ronin more that the Grinchy critics? Are we the only viewers who liked it?  For an answer to both, take a gander at its Tomatometer score. A measly 12% of critics gave it a Rotten score while 63% of the audience Liked it. That’s a huge difference and a gap that big says something, don’t you think?

One of the things I liked most about 47 Ronin was that it is not filtered through a lens of Western sensibilities, as The Last Samurai was. No one comments on the requirements of Bushido, misinterprets them, is outraged by them or criticizes their demands. The hero doesn’t stand up to the arrogant Samurai—either physically or figuratively–because that would have been a really easy way to lose his head with one sweep of a katana. No one finds the rigidly stratified society of the time unfair or undemocratic. It is what it is. The hero bows to his superiors when and how deeply he must because that was his position in society. He’s a “half-breed” in a country that prides itself on racial purity and a bastard in a society where family defines both affiliations and obligations. He is tolerated—just—by the Samurai warriors around him.

A Few Quibbles with 47 Ronin

The photography is gorgeous and the special effects work very well. Do I have some quibbles? Yes, certainly. A Samurai of that time was unlikely to concern himself with the well-being of villagers and farmers. The matte-painting pagoda is more Chinese than Japanese, and the wedding dress is far too Western in color and design. But they are just quibbles. We enjoyed 47 Ronin and I only wish George Takei could have been in it.

Highly recommended for people who enjoy action movies and who like feudal Japan, fantasy, Hayao Miyazaki, and swordplay.  Lovers of The Hobbit get a dragon, a magic forest and a magical spider.