“A Nor‘easter is a storm along the East Coast of North America, so called because the winds over the coastal area are typically from the northeast. … Nor’easters usually develop in the latitudes between Georgia and New Jersey, within 100 miles east or west of the East Coast.”
— National Weather Service

I knew it was bound to happen. The wild, unusual and often-devastating weather patterns that affected other parts of the country in 2017 were sure to hit New England sooner or later. While the rest of the world also experienced extreme weather, I have to keep this post to a reasonable size so I’ll focus on the U.S. 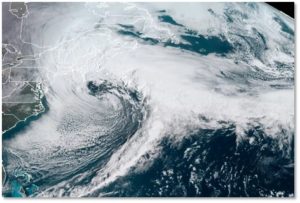 Hurricane Harvey flooded Houston. Irma devastated Florida and wiped out the Caribbean islands. Maria blew Puerto Rico back to the nineteenth century. More than 95 percent of the U.S. Gulf Coast was affected by at least tropical-storm-force winds, or winds of at least 39 mph, this hurricane season.

Out west, wildfires raged across multiple states, consuming millions of acres of forest and turning whole neighborhoods to ash. In California, mudslides with rocks the size of SUVs slid down streets and ripped into houses.

I knew it wasn’t over. Weather doesn’t respect calendar dates, after all, or even seasons. So far this year—just a couple of months—the arctic experienced its warmest weather and February in New England felt like April. Well, that’s not so bad. Weird, maybe, but pretty harmless. No one ever lost their home to early daffodils. 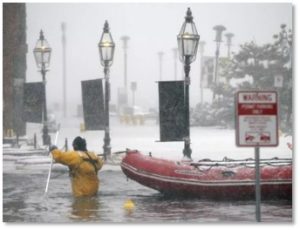 It couldn’t last. And it didn’t.

The only question would be what form extreme weather would take when it hit this area. January hit us with another polar vortex and New England stayed locked in the deep freeze for several weeks.

Now we are reeling from multiple storms: nor’easters with different impacts. So far, we have had three nor’easters in three weeks and our fourth is arriving today.

The weather forecasters have begun talking about a fifth nor’easter before the end of March. My daffodils were a half inch up when the storms hit and I haven’t seen them since.

Why So Many Storms?

Weather usually moves from west to east across the United States, so why do nor’easters hit us from the northeast?

“During winter, the polar jet stream transports cold Arctic air southward across the plains of Canada and the United States, then eastward toward the Atlantic Ocean where warm air from the Gulf of Mexico and the Atlantic tries to move northward. The warm waters of the Gulf Stream help keep the coastal waters relatively mild during the winter, which in turn helps warm the cold winter air over the water. This difference in temperature between the warm air over the water and cold Arctic air over the land is the fuel that feeds Nor’easters.”

As nor’easters come up the coast and travel over open ocean, they pick up moisture in what is called the fetch,. The storms move in a circular counter-clockwise direction, so the winds are coming from the northeast when they get to New England. As they hit land, they drop all that moisture as either rain or snow.

No Time to Clean Up 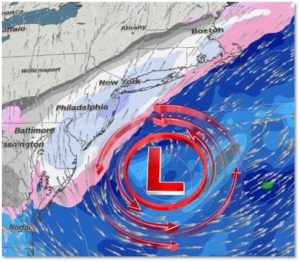 We’re in a jet-stream pattern, not unusual for New England at this time of year, that brings storms out of the arctic, down into the southeast and then up the coast. The only thing different about this year is the severity and duration of the storms—plus the fact that they have arrived with the regularity of planes coming into Logan International.

We don’t have time to clean up after one nor’easter before the next storm hits. All along the roads, homeowners have piled cut-up branches and even tree trunks at the edge of their property so DPW crews can take them or chip them. (The Department of Public Works does not normally provide this service for trees on private property. Unusual storms require unusual responses.) Before they could begin that work, however, another 14 inches of snow landed on top and buried the piles.

Snapped-off tree trunks leave the tops hanging down and split branches rest on the ones below them. Sooner or later, the wind, time, an ice storm—or Winter Storm Toby—will finish the job and these hangers will plummet to the ground. Lumberjacks and arborists call them “widowmakers” for obvious reasons but I’m not sure every suburban homeowner knows the danger. If you have one or more of these trees on your property, stay away until you can get a tree service to remove the hangers.

The jet stream is still locked in the pattern that has brought us four nor’easters in one month. Weather forecasters tell us that more nor’easters may follow Toby.

We have been warned. Stay warm and dry, everyone.