Several people wrote to comment on this week’s post, “Did NO ONE Pay Attention in English Class?” and most contributed their own pet grammar peeves. Here they are:

Insure” when they mean ensure

To explain, ensure means “To make sure or certain,” while insure means “To cover with insurance.” In other words, if you’re not prepared to compensate someone monetarily if the sure thing doesn’t happen, use ensure. Easy peasy.

Could of when they should’ve said Could’ve

Could of has no meaning in the English language while could’ve is the contraction for “could have.” Got it?

Using that instead of who 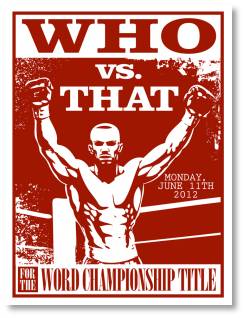 Usage of this is becoming so widespread that I’m afraid who will fall out of usage. Who refers to a person or persons. “It’s used as a relative pronoun to introduce a clause when the antecedent is a human or is understood to be a human.” That, on the other hand, refers to a thing that’s “being singled out, implied or understood.”

So, who is for people and that is for things. This is really very simple and I don’t understand why so many people have a problem with it.

One of the unintended consequences of the women’s movement is that we have become overly sensitized to the use of the word he. Once upon a time, women were justifiably upset that the masculine was always assumed and insisted that women be represented in the language. Unfortunately, this forced people to sometimes use the unwieldy he/she construction. Because Americans dislike long or awkward constructions, we began to replace he/she with they or their, believing that it would cover everyone or gloss over any confusion. Wrong.

Here’s an example from the mystery novel I’m reading. It’s the second in a very successful series by a Norwegian writer and the error is probably more the translator’s fault than Jo Nesbø’s

The subject of the sentence is Each and she only wears one pair of panties—at a time, anyway. See the difference? A variation would say:

Because each crew member wears only one uniform and has only one rank. 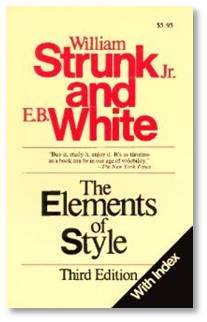 As I said before, I don’t know why so many mistakes have become common usage. Do English teachers not pay attention in class? Is there some English language version of the New Math that teaches these errors as proper usage? Doe Microsoft Word highlight good grammar and suggest bad grammar instead? Well, I know the answer to that last one. Yes, it does.

Don’t trust Microsoft Word. Get your own copy of The Elements of Style by William Strunk Jr. and E.B. White. It’s a slender volume that you use for reference, although reading it is no chore. Professional writers and English majors just refer to it as Strunk and White and we all have a copy near to hand. Join the Strunk and White fan club and you’ll always find an easy answer to your grammar questions, like whether to use their, they’re and there.