The Bedford Building provides a spot of color and architectural interest amid the glass and granite monoliths that characterize Boston’s Financial District today. It comes as something of a surprise to find a polychrome Ruskinian Gothic structure filling the triangular block of Church Green. 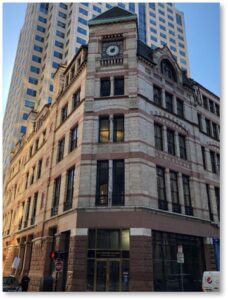 The Bedford Building from Church Green

The architectural team of Charles Cummings and Willard T. Sears designed the six-story building as a retail shoe center for Henry and Francis Lee. The shoe and leather trade dominated this area of Boston after the Civil War.

Cummings and Sears called the style Venetian Gothic. Because it presents its front door on the narrowest wall, facing Church Green, the triangular space where Lincoln, Summer, and Bedford Streets cross, a viewer can easily miss how large the Bedford Building is. Its size explains why it is also called the Bedford Block.

The taller but blander exterior of the State Street Financial Center behind the Bedford Building reminds me how much I prefer details and decorations that add visual interest to a building’s exterior. 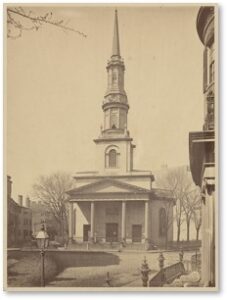 NOTE: In typical Boston fashion, Church Green no longer has a church and is definitely not green. A church once stood here but, from the photos I’ve seen, this small space never was green.

Church Green got its name from the octagonal New South Church, designed by Charles Bulfinch. Made of hammered granite with four fluted Doric columns and a pediment atop the portico, it had the distinction of being the only Boston church to face the sea. Dedicated in 1814, the New South Church was demolished in 1868.

Built in 1875-75, the Bedford Building went up literally on the ashes of the Great Fire of 1872. It displays a variety of Ruskinian (or Venetian) Gothic elements that were executed in polychromatic bands. Willard and Sears achieved this effect by layering New Brunswick red granite, white Tuckahoe marble, and pressed terra-cotta panels. 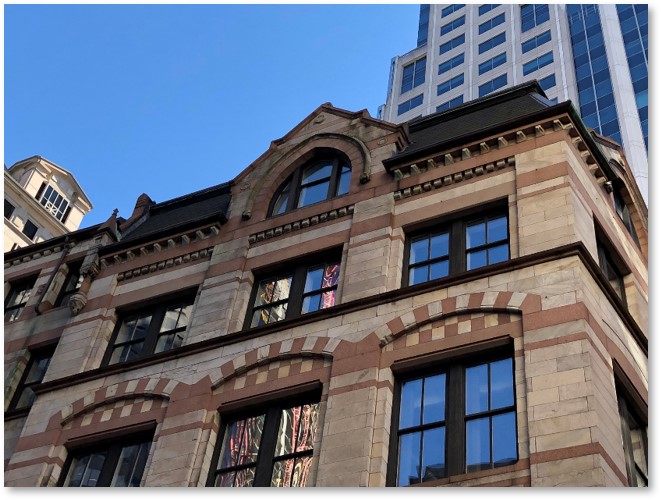 They made the Bedford Building the first structure erected after the Great Fire to use the red granite from New Brunswick, Vermont, as a building material. The terra-cotta panels were manufactured in Philadelphia, PA.

A Fortress with Clock 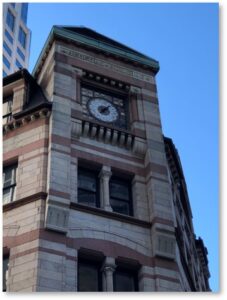 The corner clock tower facing the intersections of Bedford and Summer Streets has a glazed tile face and is surrounded by yellow tiles. I think it lights up at night but I have never been there at night to make sure. Does anyone know?

Upper floor details include arched bay windows on the third floor with the bays topped by checker-board elliptical arches. A plaque on the east side displays the linked initials of Henry and Francis Lee under a smaller floral medallion. 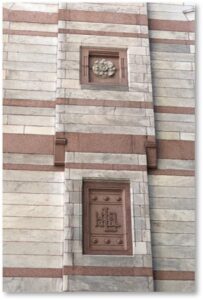 Iron balconets inspired by Viollet-le-Duc and a corner tower seem to have been removed during a 1983 renovation by Bay-Bedford Company.

A later renovation by The Architectural Team restored original details and design elements while adding a retail atrium. A new eight-story glass wall rises between the wings of the U-shaped floor plan to visually link the six floor levels and increase the amount of retail space.

The Bedford Block was added to the National Historic Register in 1979.