When we saw the trailer for The Accountant I said, “I hope this movie is as good as it looks. The critics went all “meh” on this movie but the fans—and I’m one of them—have a completely different opinion.

Case in point: The Rotten Tomatoes Tomatometer shows a 49% Rotten score for The Accountant while audiences scored it at 87% Liked. That’s a big difference.  I’m not sure what movie the critics actually watched but they couldn’t have been looking too closely because I viewed something engrossing.

I saw interesting contradictions piled on top of one another: an abnormal individual struggling to function in a world that is alien to him, a mild-mannered accountant with a very dark side, an emotionless person with a strong moral code, someone who solves puzzles obsessively but is himself an enigma, a boy who loves his family but drives it apart, a man who wants to connect with others but can’t bring himself to act. Those things make for a pretty powerful set of conflicts—and that’s before you get to the main action.

What The Accountant is About

Here’s the plot description from IMDB:

As a math savant uncooks the books for a new client, the Treasury Department closes in on his activities and the body count starts to rise.

Critics Consensus: The Accountant writes off a committed performance from Ben Affleck, leaving viewers with a scattershot action thriller beset by an array of ill-advised deductions.

Sigh. They just didn’t get it. 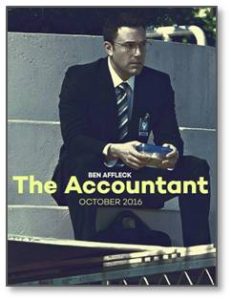 The Accountant stars Ben Affleck as Christian Wolff, a man who is somewhere on the Autism spectrum.  A math savant with what seems to be an eidetic memory, he goes way beyond a generic description like “high functioning.” Having benefited from a father who taught him how to live in the real world without becoming a victim, as well as a brother who guarded his back, Christian Wolff combines an interesting collection of skills, abilities, and attitudes.  He also has a very specific moral code and heaven help anyone who violates it.

Part of the pleasure in watching this movie comes from observing Christian Wolff’s behavior, both in normal society and outside of it. At times you see him mimic “neurotypical” words and gestures in ways that someone—father, mother, brother, sensei—has clearly taught him. Only they don’t sit quite right. The smile has no warmth, for example, and “Have a nice day” comes at an inappropriate moment. 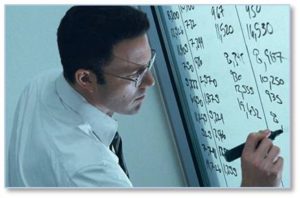 The Accountant is genuinely funny in places but we never laugh at Christian Wolff. The audience may find something funny in his actions or the way the world responds to him but we’re always on his side.

I wondered as I noticed these things whether any experts had advised Director Gavin O’Connor on Wolff’s particular brand of autism. How accurate was the portrayal, really? And there in the credits appeared the names of four autism consultants and one math consultant. Impressive. You don’t see that attention to detail every day and it answered my questions about whether an autistic person could actually do the things I was watching.

I Recommend The Accountant

The Accountant topped last week’s box office at $24.7 million on a production budget of $40 million. With the kind of word of mouth that kept Argo going for weeks after its opening, this movie should also make a good profit.

In the meantime I recommend The Accountant highly to people who enjoy a complex plot, a complicated protagonist, and a story that moves right along. It’s pretty violent, although not gory, but the violence fits the plot. Sit back and enjoy. You’ll like meeting Christian Wolff and I hope to encounter him again in a sequel.

Note: The protagonist, as with all his aliases, has taken the name of a famous philosopher, mathematician and scientist. Here’s the real Christian Wolff.