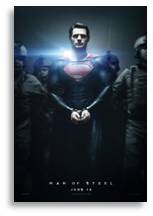 OK, I am now officially burned out on superheroes of any size, color, super-power, driving force, or mission.  I don’t care if he is a caped crusader, man of steel, green lantern, man in a can, green monster, Norse god, product of genetic tinkering, or captain of any country’s army.

I don’t want to know if he:

I Don’t Want to Know About Superheroes

I don’t want to know if he wears a really cool Spandex suit, carries a shield with a target on it, tears through his clothing when his super muscles, fur or claws emerge, wields a hammer no one else can lift, spins spider webs from his palms or a has a whole garage full of gimmicks created by his own private Q.

Nope. I’m done. And I say that knowing that another Thor movie is coming out and the Agents of S.H.I.E.L.D. will be appearing on TV.

As you may have guessed, we saw Superman: Man of Steel this weekend.  I was encouraged when the beginning spent more time on Krypton than in Kansas—the former being more inherently interesting than the latter. And I like the way they showed Clark Kent as a bullied kid because he’s mild-mannered and doesn’t like violence. Heck, if even Superman can be bullied, then no one is safe in America’s schools. The acting is also a big improvement over the 1978  movie that made a star out of Christopher Reeve. Henry Cavill does a very good job in the role and  is quite engaging as Clark Kent / Kal-El.  Amy Adams is a much better, smarter Lois Lane than Margot Kidder could be. We also get to watch Michael Shannon do a credible villain as General Zod and Russell Crowe pontificate nicely as Jor-El. The rest of the cast includes Diane Lane, Lawrence Fishburne, Christoper Meloni, Richard Schiff, and Kevin Costner. If Harry Lennix plays an army general one more time, they’re going to have to give him his own uniform. 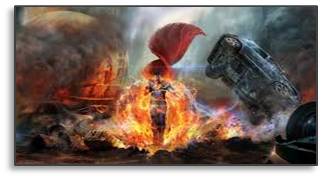 But The Man of Steel pivots on two huge “action sequences,” one on Krypton and one in Metropolis, that are loud, too fast to follow, ridiculous in concept, and over the top altogether. It doesn’t get much bigger than an exploding planet–even if no one feels a disturbance in the Force.I know, I know, those scenes are mandatory, created for testosterone-enabled viewers. That’s what they go for; that’s what they wait for. Not being one of that target audience, however, I always find the human story more interesting than the superhero doing his thing. I like watching Clark Kent, both boy and young man, trying to figure out who he is and what he needs to do with his life. I enjoy following Bruce Banner as he avoids the world while trying to find a cure for his affliction. I get a kick out of Steve Rogers puzzling out references to things that happened while he was asleep in the ice.  And I love smart, snarky, sarcastic and witty Tony Stark just being himself—especially when Joss Whedon writes the dialog.

Then whatever superhero movie it is gets to the inevitable big fight scene and I tune out. Slam! Bang! Punch! Whap! Crack! Kaboom! Pow!  They might as well put the sound-effect balloons in the movie. There’s no subtlety, no skill, no thought, no strategy—just more action that’s louder, faster, bigger, stronger, more fiery, more devastating. Did I say louder?I need to decompress. 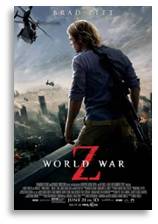 Superhero movies aren’t going to change the formula any time soon because it works. Man of Steel has taken in an estimated $125.1 million in the U.S, and Canada since Thursday night. When you add that to the $74.1 million it grossed in 24 overseas markets, you get a super-duper total of nearly $200 million in one weekend alone. That’s a powerful opening for a movie that cost between $225 and $270 to make.  @WSJ calls it the “Second-biggest debut of the year behind Marvel’s Iron Man 3.”  A sequel is already in the works.  Remember, Hollywood isn’t about fancy suits, super powers, crime fighting, or even exploding aircraft. It’s all about the profits. The Man of Steel is giving them just what they were hoping for—blockbuster results.