”We’ve always defined ourselves by the ability to overcome the impossible. And we count these moments. These moments when we dare to aim higher, to break barriers, to reach for the stars, to make the unknown known. We count these moments as our proudest achievements. But we lost all that. Or perhaps we’ve just forgotten that we are still pioneers. And we’ve barely begun. And that our greatest accomplishments cannot be behind us, because our destiny lies above us.” 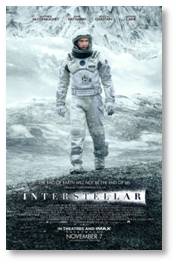 We saw Interstellar this weekend and I found it an interesting experience. Our local theater, Regal Cinema at Solomon Pond, had relegated this film to one screen so they could dedicate five to Mockingjay and other movies. We arrived late and found almost every seat in the theater taken. We had to sit way up front and to one side, which is far different from our preferred seats in the middle of the middle. Still, we were soon engrossed in the Interstellar movie experience.

I wish I could say that I loved this movie from its beginning to its end, 169 long minutes later. Unfortunately, that wasn’t the case. The critics appear to have been as perplexed as I was. Rotten Tomatoes gave it 73% Fresh on the Tomatometer although 87% of viewers Liked it.

The Science of Interstellar

As a Liberal Arts major, I won’t presume to comment on the science (astrophysics, advanced math, orbital calculations, traversable wormholes, black-hole slingshots, etc.) at the core of Interstellar. Kip Thorne, the movie’s science adviser, has written a complete book on the subject but I don’t even understand the article he wrote for Salon. Try “Our Universe Would be Destroyed: Inside the Science of Interstellar” and see if you do any better. The Scientific American interview, “Parsing the Science of Interstellar with Kip Thorne” was an easier read (a first for me with Scientific American) Suffice it to say that Director Christopher Nolan and Kip Thorne did their very best to make sure that the movie is scientifically accurate—even to the hydrology of the soliton waves on Miller’s planet. 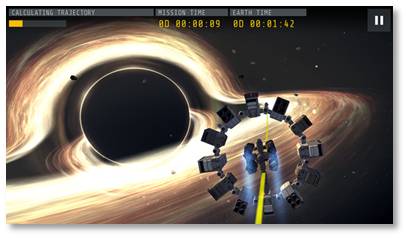 Calculating a trajectory around Gargantua

This is a something of a relief after viewing many movies in which Hollywood played so fast and loose with science that everyone from Neil DeGrasse Tyson to, well, me complained about it. That meant I could focus my attention elsewhere in @Interstellarmov. I had intentionally avoided reading the reviews because I wanted the plot to reveal itself gradually, without spoilers from well-intentioned (but misguided) reviewers. That worked. Unfortunately, I found the pacing uneven so the movie dragged in some spots and sped up in others. Sometimes it was simply unbelievable.

First, that’s because it spent a lot more time in a dust-bowl future United States than I wanted to experience in a movie about going into space  Second, it reiterated the same images, hammering them home so that we unwashed masses and Liberal Arts majors would get the point. Well, I didn’t need that repetition to understand what’s going on. I figured out who “the ghost” was before director Christopher Nolan opened the door to the secret . . .  oops.. The rest just felt like getting beaten over the head.

A Faster Pace in Space 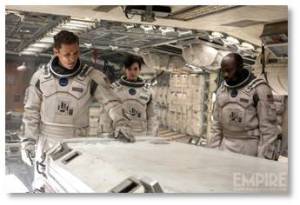 Where do we go from here?

Once we got into space, the movie picked up its pace and grew more interesting. Still, the wormhole looked like the one Stargate SG-1 goes through  and the mobile computer TARS is the clunkiest, least reassuring intelligent mechanism Hollywood has yet given us. I hung in with #Interstellar for nearly three hours, wondering, for example:

Kip Thorne has explained that they wanted the movie to lure young people into being interested in science. I left the theater feeling not only uninspired, but sort of flattened. The Earth of Interstellar is losing its ability to sustain human life, which is a point we may reach but have not gotten to quite yet. The United States of Interstellar, however, is a country that is much closer to contemporary reality. It’s one in which people have turned their backs on science, lost interest in the stars, claim the moon landings never happened, and force NASA into hiding. Sound familiar? As Matthew McConaughey’s Cooper says, “We used to look up at the sky and wonder at our place in the stars, now we just look down and worry about our place in the dirt.” 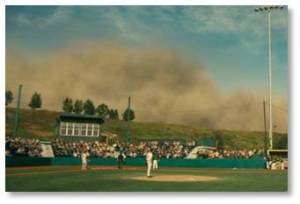 . . . And unto dust thou shalt return

As I wrote in a previous post, we are pretty  much there right now.  A country that cuts NASA’s budget, depends on Russian rockets to carry our astronauts to the International Space Station, worries more about government spending than on new achievements, and thinks faith trumps science is not a country that has the will or the drive to reach the stars.

In the sixties and seventies, the United States racked up one scientific achievement after another. We were an ambitious, eager country that broke barriers, discovered new technology, walked on the moon, defeated polio, and thought we would find our best days in the future. Now we worry about diseases instead of finding vaccines and cures, can’t find the funding to fix our country’s essential infrastructure, and think that space exploration is a waste of money. We now put our greatest scientific advances into building new versions of existing technology so we can share videos of cats and watch sitcoms on ever-higher-definition TV sets.

Our country may not be the literal dustbowl that’s seen in Interstellar but it has instead become a dustbowl of ideas, a place in which ambition, drive, innovation, cooperation, and leadership have crawled into the corn fields to lick their wounds. Maybe that’s why I felt so dispirited leaving the theater. I hope that Interstellar can help change that mindset and I’m encouraged that science played such an important role in the movie.

I recommend Interstellar, but with the caveats above. Their struggle is desperate, their triumph occupies a small part at the very end, and the inspiration Mr. Nolan and Dr. Thorne were seeking is sometimes obscure. It’s as joyless a triumph as you’ll ever see on screen. But the theater was crowded—and that’s a good sign. To date, Interstellar has grossed $147,090,000 on a production budget of $165 million. If only they were donating that money to #NASA to fund a Mars project.