This is the seventh post in my Christmas series about Boston’s angels.

On my hunt for Christmas angels, I headed to Boston’s Angel Central: the Cathedral of the Holy Cross. I figured the city’s biggest Catholic Church was bound to have angels somewhere inside. The Mother Church of the Archdiocese of Boston did not disappoint.

Cathedral of the Holy Cross: Exterior and Interior

The current cathedral on Washington Street replaces the first church built in 1803 for Boston’s Roman Catholics on Franklin Street by Charles Bulfinch. Located at the southern end of Bulfinch’s Tontine Crescent, it served a rapidly growing Catholic population but the building became dilapidated as the area grew more commercial. and it was surrounded by business blocks. This church was demolished in 1862 and a plaque marks the site at what is now 214 Devonshire Street.

Today’s cathedral was designed in the Gothic Revival style by Patrick Keely, a noted nineteenth-century ecclesiastical architect, whose career produced 16 Catholic cathedrals and 600 other churches. Constructed of Roxbury puddingstone with gray limestone trim, it measures 364 feet in length, 90 feet in width and 120 feet in height. A planned western spire was never completed.

The building, which can accommodate about 2,000 worshipers in the main level, also has an oratory for smaller services in the lower level. The cathedral retains the largest pipe organ in New England—its E. and G.G. Hook and Hastings, opus 801 , which was installed in 1875. On the day we visited, the organist was giving a recital so we got to hear beautiful music pouring from this historic instrument. You can hear concert organist Anthony Hammond play Franck’s Choral No. 1 on YouTube.

You see so much when entering this sacred space that it takes a while to find all the angels, in a variety of media, who call it home. First I located the celestial visitors in three of the 32 gorgeously colored stained glass windows—New England’s largest and earliest collection of stained glass. Most are attributed to Munich, Germany, and their designs in deep, saturated colors include architectural motifs that repeat patterns from the church itself.

Angels appear in windows dedicated to:

While the details of St. Cecilia’s life remain somewhat hazy, she was a Roman virgin forced by her parents to marry the pagan man Valerian, who converted so he could see the angel that guarded her chastity. It’s a charming story, if you don’t mind the gruesome martyrdom she suffered after the murders of her husband and brother in law.

St. Cecilia is regarded as the patroness of music, because she heard heavenly music in her heart when she was married.

The Lady Chapel to the right of the main altar holds a large statue of the Blessed Mother from Munich, Germany. Angels with outspread wings kneel on either side. 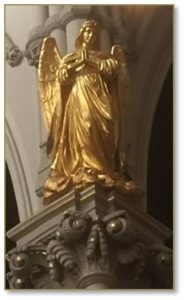 Four large gilded angels peer down from the main pillars at the intersection of the nave and transept in front of the chancel, or where the two parts of the cross-shaped floor plan meet. Wings outstretched and hands folded in prayer, they have identical designs and stand on frothy gilded clouds. They could make a good quartet If they were singing instead of praying.

Two plaster angels about four feet high guard the cathedral’s main doors as you exit. Plain white and unadorned, they do their job simply and quietly.

After searching hither and yon for Boston’s angels I found it cheery to discover so many gathered under one very tall roof as well as in so many sizes. You can see them, too, at least until the cathedral closes later for interior renovation.

The Cathedral of the Holy Cross 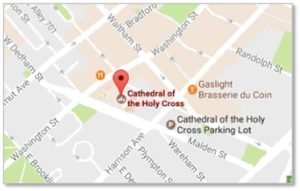 You can find detailed visiting directions on the Cathedral of the Holy Cross’s website.

Parking is available in the cathedral’s parking lot, on neighborhood streets or in a private lot on Harrison Avenue. Both the MBTA’s Silver Line (Union Park Street Station) and the Orange Line (Back Bay Station) stop within walking distance.