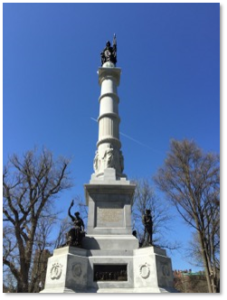 With all the recent hullaballoo about Confederate statues, I thought it would be interesting to write about Boston’s Civil War monuments. We have several, some impressive and some not. I planned to write about three of them but, as usual, there’s just too much to say about each to cover all that information in one post.

I’ll start with the Soldiers and Sailors Monument on the Boston Common. People walk by this impressive structure every day without showing much interest. It doesn’t get the same attention from tourists and field-trip students as the more famous Robert Gould Shaw Memorial on Beacon Street.

Perhaps that’s because the monument doesn’t show specific men who were depicted by stars like Matthew Broderick, Denzel Washington and Morgan Freeman in the1989 movie Glory. And its sculptor isn’t as famous as Augustus St. Gaudens.

It is impressive and worthy of a visit, however, for several reasons.

The Soldiers and Sailors Monument

This tall structure tops Flagstaff Hill, a small rise, on the Boston Common. It honors all the Massachusetts soldiers and sailors who died in the Civil War, the ordinary men, the citizen-soldiers and volunteers who perished in the war, rather than heroic battles or famous leaders.

That makes it very different from the Confederate generals on their noble steeds who led so many of their troops to defeat and death, yet have monuments that glorify their achievements.

Designed by Martin Milmore, who also sculpted the statues of Ceres, Flora and Pomona on the old Agricultural Hall and the sphinx at Mount Auburn this monument was initiated right after the war ended in 1866. The city dedicated it on Sept. 17, 1877—the 15th anniversary of the Battle of Antietam—before a crowd of nearly 25,000 people. The entire Massachusetts militia force paraded in Boston on that day and President Ulysses S. Grant reviewed the troops.

The Soldiers and Sailors Monument is complex, with multiple statues, plaques and bas-relief sculptures. As Boston’s most elaborate memorial, its various components and abstract symbols deserve individual attention. 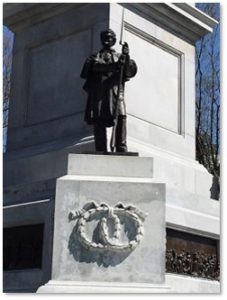 Its base, 38 feet square, stands on an underground platform that’s 16 feet deep. From the base, four pedestals project with carved laurel wreaths, representing victory, on their sides. Each pedestal holds an eight-foot-high bronze statue:

If you have not visited the monument recently, you may wonder how you missed these big statues. The answer is that they were removed for renovation and restoration, leaving the pedestals empty for several years. The allegorical statues returned from rehab at Watertown’s Daedalus Studio in 2014, with missing parts fabricated in bronze.

Four large bas-relief panels that depict different aspects of the Civil War appear between the pedestals.

All the many figures in the bas-relief panels are real people who all can be identified. 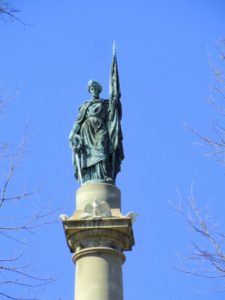 The Genius of America

From the pedestals, a Roman-Doric column of white Quincy granite rises 72 feet. At its base, four granite figures carved in high relief face the cardinal directions of the reunited nation. Four marble eagles bracket the column’s capital. Standing on the top as the monument’s crowning glory, an 11-foot-high bronze statue depicts the “Genius of America.”

A “majestic and mourning woman” dressed in classical draperies, America wears a crown of 13 stars to represent the original colonies. She carries an American flag in her left hand and holds a sword and laurel wreath in her right. America faces south.The bronze statues were cast in Chicopee, MA and Philadelphia PA.

Lest you be confused about the monument’s intent, here is the inscription written by Charles William Eliot, president of Harvard College:

Note that it says nothing about state’s rights, taxes, or northern aggression.

You will notice that this entire monument is dedicated to the common man. While we know the names of individuals depicted in the bas-relief plaques, these are small and easily overshadowed by the oversize allegorical sculptures.

No monument to conquering heroes or, losing Confederate generals, the Soldiers and Sailors Monument focuses on the men who volunteered, fought, and died to keep the Union whole. That’s a big difference. 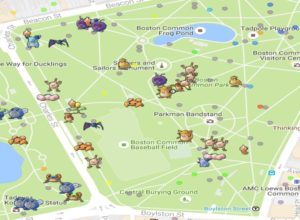 You really can’t miss the Soldiers and Sailors Monument. Flagstaff Hill isn’t very high but it is taller than any other point on Boston Common. Just look for the tall white column and head for that.The granite has been cleaned, the inscription gilded, the statues restored and the graffiti eliminated.Take your time and appreciate both the artistry and the restoration.