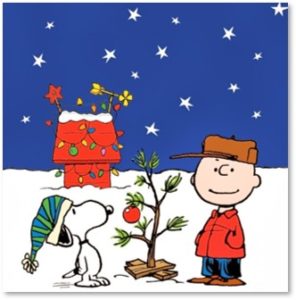 This weekend I did some gardening clean-up because it was, finally, not either raining or bitterly cold with a strong wind. After pulling up the plant stakes, I (finally) dug up the roots of the fox grape that takes over the perennial border every August despite my pruning and a trellis.

Next, I turned my thoughts to Christmas.

With the frost-killed autumn chrysanthemum on the compost, I went onto the rough of the golf course next door in search of a white pine sapling. I didn’t have to look long—hundreds of them spike the woodland floor. While I was searching, though, I found a little animal skull lying on the ground.

Definitely Not a Squirrel

It looked about squirrel size but the orbital sockets are really big and it has two sharp fangs. Hmmm. I brought it in and did a quick search. Yup. Not a squirrel skull. So, what animal did it belong to before some larger predator had it for dinner? 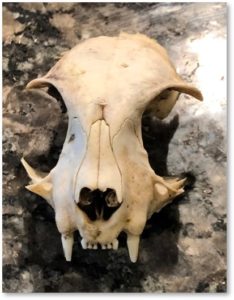 It was definitely mammalian—not a bird or a reptile. At least, if a reptile this big slithers anywhere near my house, I don’t want to know about it. I turned to the internet and searched on the skulls of various mammals.

The lack of a bottom jaw made identification more difficult but the big eye sockets ruled out a coyote cub. The teeth indicated that it was a predator, though. I guessed that the skull belonged to a skunk—but that didn’t seem right, either.

So, I sent the pictures to my sister for identification by my brother-in-law, the Wildlife Management major. His verdict: it’s a cat skull.

My first thought was that a coyote had nabbed a neighborhood cat and brought it up to the golf course for a leisurely dinner. Poor kitty.

Then I thought again.
Oh, no.
But most likely.
It’s Mystique.

After she crossed the Rainbow Bridge, we buried Mystique up by the stone wall between us and the golf course. We dug a pretty deep hole for her but, after we filled it in, we didn’t put a stone over it. Later that year, I noticed that the dirt around her grave looked disturbed. I did not, however, check to see if she was still down there. 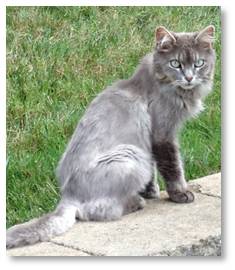 Most likely, the coyotes dug her up and disposed of her body according to nature’s law—head not included. The bad news for them is that they would have gotten a dose of the poison the vet used to end her suffering. The rest of nature’s clean-up crew took over in the year and a half since her death.

All that remained was her skull and that’s what I found—not far from her grave.

I’m not sure what to do with it. Should I just put it back in the grave? Should I donate it to the high school biology lab? Should I bring it down to the Assabet River Wildlife Refuge for their display case?

I don’t know about the next step. Does anyone know who would like a cat skull? What do you think? 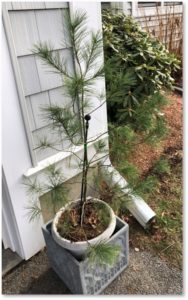 PS: Here’s my sad, little, white pine, Charley Brown Christmas tree. It’s out in the rain–and we have had a lot of rain–so I’m trying to think how to decorate it.