Giant Oarfish: On October 15, a marine biologist who was snorkeling near Catalina Island spotted a big surprise. Jasmine Santana recruited 15 onlookers to help her drag the body of a giant oarfish (Regalecus glesne) onto land. Also known as the “king of the herrings,” giant oarfish live in the deep ocean, around 3,000 feet, and are rarely seen at the surface. They typically measure from three feet to nine feet long. While larger specimens have been recorded—they can grow up to 50 feet—staffers at the Catalina Island Marine Institute called this one, “the discovery of a lifetime.” A necropsy later showed that it was carrying a heavy load of worms and parasites. 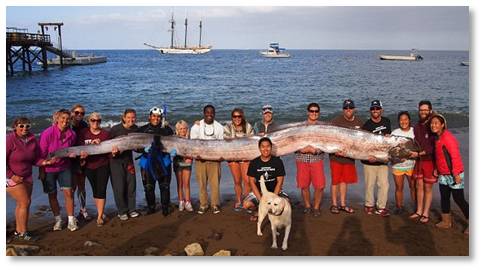 On October 21, a second oarfish, or “giant sea serpent” washed up in Oceanside, CA. This one was 14 feet long, although its tail was truncated. The beast’s six-foot ovaries were filled with “hundreds of thousands of eggs.” Cause of death for both animals is unknown but was given as natural causes. If you want to see a live oarfish swimming in the Gulf of Mexico, check out this National Geographic video. It’s a little creepy.

Japanese folklore calls their smaller cousin, the slender oarfish, (Regalecus russelii) the Messenger from the Sea God’s Palace. If many of them wash up on shore, this is considered a harbinger of an upcoming earthquake.

Giant Squid: The image of another enormous sea creature on the beach—in this case a giant squid—made the social media circuit on January 9. The beast’s enormous size (160 feet) was reported to be due to “radioactive gigantism.” Unfortunately for lovers of sea monsters, this sighting was proved to be a hoax perpetrated by the Lightly Braised Turnip satirical website. (One, two, three: Awwww!)

(Why are satirical and humorous websites named after vegetables? Inquiring minds want to know. Maybe I should start one called the Rutabaga.) 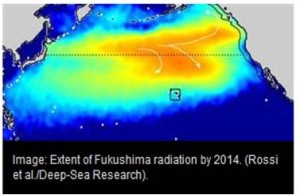 Radiation Plume: The debunked hoax and its B-movie explanation play on fears of the Fukushima nuclear power plant, which was devastated by the tsunami that struck Japan in March of 2011. Since the disaster hit, and despite massive efforts to contain the leak, an alarming plume of radiation has been streaming west across the Pacific. An article by James A. Foley in Nature World News says that, “By March of 2014 a strongly diluted plume of ocean water containing radionuclides from the 2011 Fukushima nuclear incident in Japan will reach the west coast of North America.”

Not to worry, however. The plume, which contains Cesium-137, has been so diluted by Japanese currents, “it will be harmless.” Meanwhile, some marine scientists say that the plume has already reached the West Coast but there will be only, “minor effects.” I am completely reassured, though, because these reports come from the government, so I know I can trust them.  Actually,I feel better because I live on the East Coast.

So what happens as the radioactive plume moves up the coast from California to Alaska—for the next 10 years. Will giant great white sharks appear off the Farallon Islands. Will outsized orcas storm SeaWorld to free their captive brethren? (SyFy Channel, are you listening?) Or will surfers have to wear hazmat suits to ride the waves? 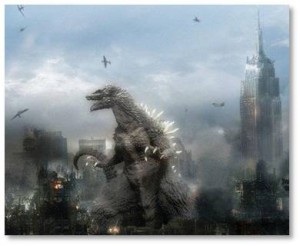 Monsters from the Sea: Coincidentally, Hollywood is readying a remake of Godzilla, the movie that first brought the concept of radioactive gigantism to life, for release in May of this year.

The irony is that Japan created the original Godzilla in 1954 out of the fear of radiation that resulted from the atomic bombs dropped on Hiroshima and Nagasaki by the United States. Gojira, the monster from the sea, was supposedly created by “nuclear weapons testing.” Now we are afraid of sea monsters being created by Japanese radiation and then exported, so to speak, via ocean current to the United States.

For the next 10 years, meanwhile, the ocean currents could give a whole new meaning to the phrase, “What goes around, comes around.”