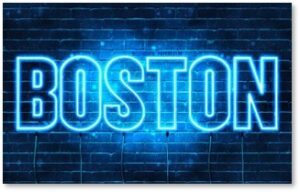 When it comes to Boston’s old neon signs, research proves unsatisfactory. Our memories provide a better record than photographs and news articles seem to have done. Glowing, pulsing, blinking animated advertisements went up, they came down, and nobody seemed to care. 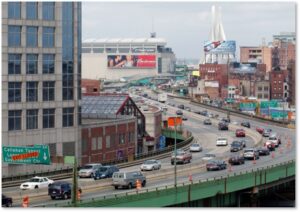 If you ever drove along the old elevated Southeast Expressway, you saw three of them but only one remains. A reader named Kevwell reminded me of the first two. Not that I have been able to find photos of them, mind you. I have clicked on links, scanned photo archives, Googled different combinations, and delved deep into the results. Nada. If you have photos of any of the signs below, please let me know.

Driving from south to north, you would have seen:

Atop a building near Dock Square and facing the Central Artery, this sign advertised Handschumacher “Frankforts,” a local brand of hot dogs. In addition to the name in script, a skyrocket began as a line of white lights that gradually lit from the bottom and rose until they mushroomed at the top into a twinkling cascade.

Kevwell notes that: “Handschumacher in German means glovemaker, a process I suppose is akin to making ‘force meats’ like hot dogs & sausages.”

This brand has fallen so far into history that it isn’t listed in New England Today’s list of nostalgic New England brands. Having presumable gone out of business, the frankforts are not available for sale on FamousFoods.com. 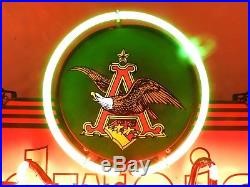 On the side of the old Boston Garden facing the Central Artery perched the Anheuser-Busch eagle logo inside a green circle. The sign was multicolored and the segments lit up in sequence. At the end the eagle flapped his wings.

If you were stuck in traffic, the Anheuser-Busch eagle would entertain you while you crawled along. Perhaps if the old Garden had survived longer, the brewery would have replaced their eagle with galloping Clydesdales. We’ll never know.

The neon sign for this candy, chocolate and cake company lasted long enough to become a significant landmark in Boston, similar to the CITGO sign. It identified the company’s former factory, constructed in 1928 and based in Sullivan Square, Charlestown, MA. 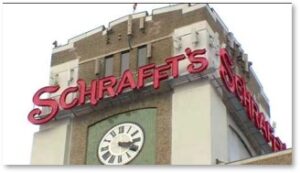 Schrafft’s later expanded to form a chain of Schrafft’s restaurants in New York, and a collection of motor inns and restaurants along the eastern seaboard from New England to Florida during the 1950s and 1960s.

The sign still shines with the company’s logotype in red cursive script but it’s no longer lit by neon tubes. The factory was redeveloped for business use and is now called the Schrafft Center. Not to worry; the sign is still there. But it’s not neon anymore. 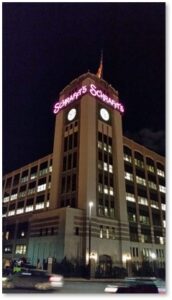 The clock tower at night

The original neon sign, rusty with letters that sometimes went dark on rainy days, was taken down in 2017. The neon tubes had grown difficult to replace and the sign required increasing and expensive maintenance. Poyant Signs of New Bedford replicated it but the new sign, still atop the building’s clock tower, uses cheaper and more dependable LEDs . They shine brighter and clearer than neon while using less energy.

Watch: The workmen of Poyant Signs replicating and installing the Schrafft’s sign in this video.

The neon tubes may be gone but the iconic Schrafft’s sign remains.

Where Did The Neon Go?

How could the first two signs have just disappeared, tossed onto the junk heap? Why are there no YouTube videos of the Anheuser-Busch eagle flapping his wings or the Handschumacher skyrocket? We don’t even have photographs.

Back then, of course, Boston was trying to claw its way out of a decades-long recession. Progress and growth governed decisions. leaving no room for sentimentality. Urban Renewal was the tool of the day and the city did not apply it with surgical precision. When whole neighborhoods like the West End and the New York Streets were reduced to rubble, who would quibble about an advertisement—or even the building that held it?

Send in Your Pictures

If you have photos of these signs or others, please send them in. Think of the old Domino Sugars neon sign on the Fort Point Channel or Buck Printing behind Fenway Park or even the old Combat Zone. In fact, I’m going to try and take some pictures of neon signs still lighting up Boston right now because you can never tell when they will disappear.  One day the building is there and the next, it’s gone.

Keep in mind that about 25% of Boston’s restaurants are expected to either close or to not re-open after the lockdown. That’s a tragedy for a lot of reasons, but those familiar signs will go dark and disappear.

Get out your cameras and join me. I would love to post your photos on The Next Phase Blog. Boston may not have a neon boneyard but we can preserve the signs in pictures and videos.