Skip to primary content
Skip to secondary content
I hate poison ivy and I am on a mission from God to eradicate it near any place where I live. 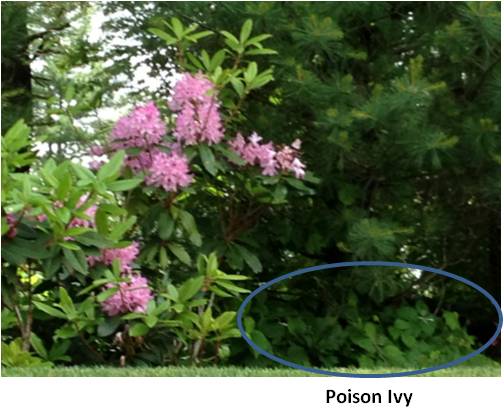 While it’s hard to find anyone who actually likes poison ivy (Goats do but they don’t talk about it.), I have encountered a surprising number of people who don’t know anything about it, can’t identify it, and think that you have to be allergic to get a reaction.  And it’s sneaky stuff:

The topic has arisen with a vengeance after the record amount of rain that we have received in the last few weeks—over 7 inches in June alone.  Everything is growing like crazy and that includes the poison ivy that my next door neighbor has been ignoring behind her unit.  The problem with ignoring it, though, is that it spreads and toxicodendron radicans is creeping over onto my yard and even climbing up the trees along the border. I started working on the problem over a week ago when I sprayed the poison ivy with the last of my RoundUp.  As expected, nothing happened, so I went to the store and bought a huge container of RoundUp®Poison Ivy Plus. I would have preferred straight Agent Orange but they don’t sell that in retail stores. 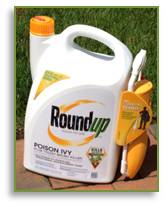 Then it rained.  After a few days it stopped raining but got so windy that spraying a toxic substance was not a good idea.  Then it rained some more.  After that it got so windy that my sturdy patio tomato in a big terracotta pot snapped off at the base.  Then it poured for two days.  You get the picture.This morning it stopped raining and I have my afternoon planned.  I’m going to spray the heck out of that stuff.  Then I’ll wait a few days and repeat.  I won’t stop until the poison ivy is gone.  I did the same thing across the street from our old house.  We didn’t own the land but the poison ivy was creeping all over the place.  I sprayed it year after year and drove it back.Poison Ivy is one of those things, along with mosquitoes and ticks that make you wonder what God had in mind when he pulled the design off the drawing board and sent it down to Manufacturing.  Yeah, poison ivy will keep people off fragile sand dunes—but only if they know what it is.  Most folks are just oblivious.  Here are some of the ones I have encountered.

People walking on sidewalks, right through huge patches of the stuff that have crawled out over the pavement.  Oh, and their dogs, too.  Animals pick up the oil, called urushiol, on their fur and transmit it to loving owners who pat, hug and kiss them. 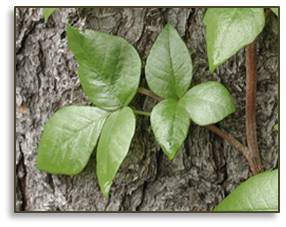 That’s how I used to get it.  I learned to identify poison ivy when I was pretty small and I stayed far away from it.  Still, I got a rash every year on my face, arms and hands.  One day I saw our cat climbing a stone wall that was covered with it and figured out what was happening.  This is another reason why I’m going to eradicate something that’s not even on my property.  It’s all just green stuff to a cat and Mystique likes to roam around.So if you don’t know what poison ivy looks like, read this Dummies site and learn how to identify poison ivy.  Remember the rule of three leaves.  And make sure your dog isn’t trotting through it on his daily walk.Finally, the sun is out.  Now, where did I put those gardening gloves?