In yesterday’s post I promised to discuss four ugly facts on employment in America today. Here they are:

The Ugly Facts on Employment 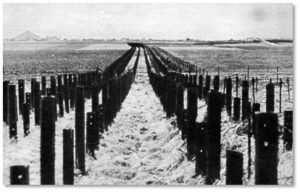 Anti-tank defenses on the Maginot Line

Ugly Fact #1: Building a very expensive wall across the Mexican border will accomplish nothing. It’s a weapon suited for the last war, not the one we really have to fight. The border wall is America’s Maginot Line — designed to make people feel safe at great cost without being effective.

Mexicans come here to get work and they have no reason cross the border illegally when the work comes to them, courtesy of American businessmen. When it comes to employment, the corporate bottom line makes a border wall irrelevant.

Ugly Fact #2: No amount of arm twisting by the American President is going to change this situation. Despite Mr. Trump’s threats and bribes, jobs are still flowing overseas and across the border to take advantage of cheap unskilled labor.

While he takes credit for jawboning to keep a token few jobs here, the majority are streaming into other countries unchecked and that has a real impact on employment.

Ugly Fact #3: Jobs in the coal industry are not going to return to Appalachia anytime soon –or ever. I understand why the residents of Coal Country want to believe that the glory days of mining will return but you can’t fuel today’s power plants and equipment with yesterday’s energy source.

To quote Stephen King’s Roland Deschain, the world has moved on since then. Natural gas, wind, solar and geothermal energy will replace coal despite hopes, dreams and candy-colored campaign promises. People who cling to Appalachia and look to the past will not prosper. And as Brad Pitt’s character said in World War Z, “Movement is life.” Get out and go where the jobs are. 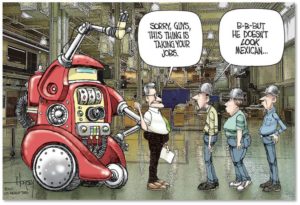 Ugly Fact #4: This is critically important. the unskilled labor jobs—and a lot of skilled ones, too—that can’t be outsourced or sent overseas will be automated. Software, artificial intelligence, kiosks, and robots are taking over some of those jobs right now and the pace will only escalate.

The automation of human labor is happening not just here but in China and Japan, too. It affects multiple industries from fast food to health care, law firms to construction. That means fewer entry-level jobs for everyone, Americans and immigrants alike. This decrease in employment opportunities may be be another reason why the rate of immigration from Mexico has dropped every year since 2003.

Note that the robots did not ask to be created. They also did not storm the barricades demanding to be programmed to take jobs from American workers. We Americans are doing this to ourselves. If the bottom line says that software or a device can do the job faster and cheaper than a human, then executives will replace the human with a mechanical solution.

Where will this all end?

The optimists say that new jobs in AI, robotics and technology will replace the manufacturing jobs that have gone away. The pessimists worry about our economy crashing because not enough people have jobs to support it—and robots buy nothing. The futurists see AI taking over the world and making human beings obsolete.

The real problem is the myopic thinking that comes from dedication to one company’s best interests without considering the larger impact. If Fred replaces all the workers in his shovel factory with robots, he can still count on real people buying his shovels. But if Dave automates his shirt factory and Megan lays off the cashiers in her big box store and installs kiosks, those unemployed workers won’t have any money to buy shovels, or shirts, or the goods in the big box store. They also won’t be able to eat at Mary’s Diner, get their hair cut at Fred’s barber shop, or give their kids piano lessons from Ms. Smith.

The resulting depression rolls downhill, affecting more and more people losing employment. Inevitably this will affect more and more bottom lines. Eventually it will have an impact nationwide. We have a consumer economy based on workers having the money to consume. Without employment that foundation erodes.

A Lack of Leadership 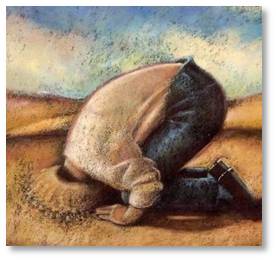 Any way you look at it, this is not a pretty picture.We cannot solve it on a company-by-company or even industry-by-industry basis. And no one in a leadership role seems to be dealing with it at all, much less very well. I have seen only one solution floated: a guaranteed personal income. We know that will be political poison.

One thing is very clear, however. Building America’s version of the Maginot Line at great expense is not the answer. Pitting one economic group against another might work in the short term but not over time. If you expect things to just work out you’re sticking your head in the sand like our politicians and business “leaders.”.

My Take on the Future of Employment

I recommend pulling your head out of the sand and looking around. Jobs will continue flowing out of the country. Coal won’t come back. Automation is replacing people every day. While these developments are ugly to look at we have to face the facts.

Stop blaming other people for your employment problems and start thinking about how to make things better yourself. No politician is going to fight for you and businessmen don’t care about you.

Yes,taking charge of your own future is harder and requires more work. But the alternative is to do nothing and watch.