To find the next entry in my series on Art Hiding in Plain Sight, you have to go inside one of Boston’s 19th century buildings, now a modern hotel. The Langham Boston Hotel houses two enormous murals by one of America’s foremost notable artists and book illustrators: Newell Convers Wyeth.

I confess to loving illustration, especially those that help bring books to life. Mr. Wyeth and his teacher, Howard Pyle, together enchanted and inspired generations of children, both boys and girls. The Scribner’s Classics Illustrated series opened doors to other times and alternate realities for kids who didn’t have tablets, smart phones, CGI, color TVs, or other modern technology.

Originally commissioned by the Federal Reserve Bank of Boston in 1922, these impressive paintings depict key moments in the history of the United States banking system. The directors chose an appropriate topic for a structure that once served as Boston’s Federal Reserve Bank and that is located in the heart of Boston’s Financial District. 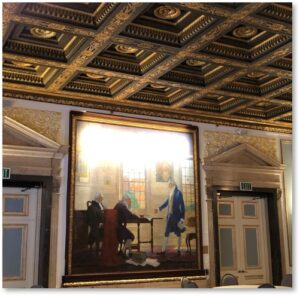 N.C. Wyeth received the commission for the murals from Roger Scaife, his editor at Houghton Mifflin, a friend of the building’s architect, R. Clipston Sturgis.

The murals hang in the Wyeth Room, which, when the building was the Le Meridien Hotel, held the Julien Bar. Before that this space served as the reception room for the bank’s Board of Directors. One shudders to think of all the cigarette and cigar smoke that wafted their way over the years.

Both of these very large murals concern a President of the United States conferring with his financial advisors on the financing of a war. N.C. Wyeth did an expert job of conveying the gravity of the situation confronting these men of different centuries, struggling with similar issues. 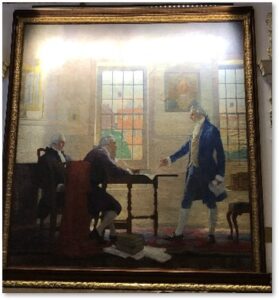 During Alexander Hamilton’s tenure as U.S. Treasurer, he established the Mint, founded the Bank of the United States and laid the foundations for national prosperity. He was born in the West Indies and killed in a duel with Aaron Burr.

Robert Morris was a prosperous and wealthy merchant in Philadelphia. He signed the United States Constitution, founded the Bank of North America, and nominated George Washington for President. Mr. Morris, the financial genius of the American Revolution, spent his final years in a debtor’s prison until he was released by the Bankruptcy Act of 1804.

Alternate Title: In the Dark Days of the Civil War; Salmon P. Chase Conferring with Lincoln 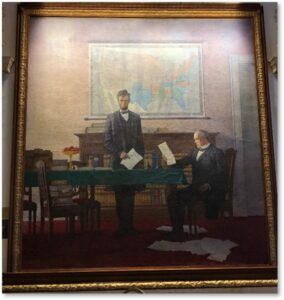 In this meeting between President Lincoln and his Treasury Secretary, Salmon P. Chase, Mr. Wyeth depicted the two men working on national banking legislation. Salmon Chase had run against Lincoln for the 1960 Republican nomination before Lincoln tapped him for his cabinet.

These two men conceived the national banking system, “to promote opportunity, a dynamic economy, and a stronger Union.” They also created the Office of the Comptroller of the Currency to regulate and supervise it. Lincoln took pride in signing the National Currency Act, which he believed would provide “great benefit” to the people and the government. 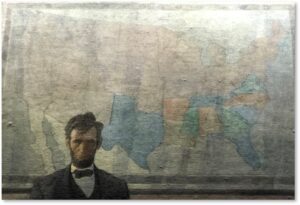 Discarded drafts of the legislation litter the floor and the bookcase behind them is filled with what appear to be law books. The map on the wall shows the United States as it existed then, less than half of its current size

You can find a detailed explanation of this currency crisis in The Wall Street Journal’s recent article, “How Paper Money Saved the Union,” by Roger Lowenstein, which features a large reproduction of this mural. 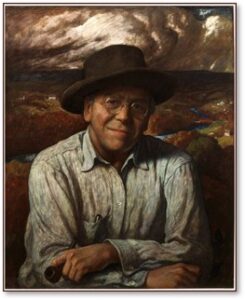 We associate Newell Convers Wyeth (1882 – 1945) most with Chadd’s Ford, PA, where he lived for most of his life. The Brandywine River Museum of Art in Chadd’s Ford displays a treasure trove of his work. In fact, however, Mr. Wyeth was a displaced New Englander, born and raised on the family farm in Needham, MA. The son of a grain dealer, he belonged to an old family which included many Harvard men.

He studied at the Mechanic Arts High School in Boston, the Massachusetts Normal Arts School, then located on Newbury Street in the Back Bay, and the Eric Pape School of Art in Boston. He went on to study under the great illustrator Howard Pyle. In his lifetime, N.C. Wyeth created more than 3,000 paintings and illustrated 112 books, 25 of them for Scribners.

During the two years he worked on the Federal Reserve murals (1921 – 1923), the family returned to live in Needham.

Wyeth was not only a brilliant artist and illustrator; he engendered a family of equally talented artists. All his children and grandchildren are either professional or amateur painters. He’s the father of the late Andrew Wyeth and the grandfather of Jamie Wyeth.

Wyeth received the Presidential Medal of Freedom in 1963, and in 1990 became the first visual artist to receive the Congressional Gold Medal.

Before leaving the Wyeth Room be sure to look up to the elaborate coffered and gilded wood. The 1922 Federal Reserve Building in the classical revival style deserves its own post, but I don’t have room for that much detail today. Perhaps later on.

As you leave the hotel, be sure to check out the five bronze panels behind the registration desk.  This artisan liquid metal map shows Boston as seen from the air with blue-green colored resin representing water.

Directions to the Wyeth Room 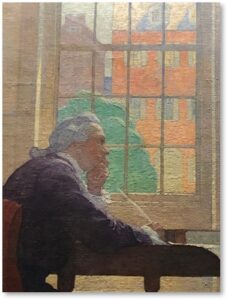 NOTE:  The Wyeth Room is a function room at the Langham Boston Hotel. To make sure you can get in, call ahead and ask if there are any events scheduled there on the day you want to visit. If so, plan for another day.

Walk in the front door and down the corridor to the back of the hotel. Turn left and go up the stairs. Turn left at the top of the stairs and the Wyeth Room will be right in front of you. It’s impossible to miss the paintings—they’re huge. Don’t forget to look up.