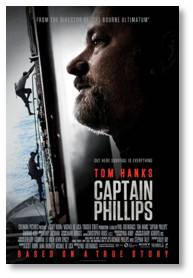 We saw Captain Phillips last weekend. The movie is based on the real-life hijacking of the container ship Maersk Alabama by Somali pirates in 2009. I remember the incident well—along with my consternation that a corporation would allow a ship and its crew to be taken by a tiny boat that held only a few untrained men armed with AK-47 automatic weapons.

Nine former crew members have protested the film’s version of events, particularly the portrayal of Capt. Phillips as a hero. In “Crew Members: Captain Phillips is One Big Lie,” an article in the New York Post by Maureen Callahan, they claim that Richard Phillips was arrogant, refused to move the ship further off the coast—to 600 miles instead of 240—as directed, and ignored an anti-piracy plan. They say he had a “perverse desire to be taken hostage.”

The officers, including First Officer Shane Murphy, are not a party to the suit, however. ShowBiz reports that Mr. Murphy considers the movie accurate. In Film blog’s article, “Director Paul Greengrass Responds to ‘Captain Phillips’ Inaccuracy Claims,” Peter Sciretta reports that Mr Greengrass, “looked into this issue in every detail.” The movie’s director concluded, “And I’m 100% satisfied that the picture we present of these events in the film, including the role playing by Captain Phillips, is authentic. I stand by the picture I give in the film, absolutely.”

I wasn’t there so I’m not going to comment on the charges or the accuracy of the movie. I will talk about what struck me.

First, no one on the ship was armed and there was no security team on board even though the Maersk Alabama was traveling through waters where pirates were operating. The NY Post article says, “After the hijacking, 11 crew members have sued Maersk Line and the Waterman Steamship Corp. for almost $50 million, alleging ‘willful, wanton and conscious disregard for their safety.’ Phillips is a witness for the defense.”

I’m with the crew on this one. This seemed like sending a Brinks truck filled with cash though the worst neighborhood of the worst city with no armed guards to protect the driver. Who would do that?

Watching that enormous vessel being taken over when it had size and height to its advantage was dismaying. I couldn’t help thinking that one Stinger missile, or even something smaller, would have taken the pirates out and stopped the whole thing before it could get started. One or two such defensive actions would have convinced the bosses in Somalia that hijacking an armed ship was unprofitable and taught the pirates that it’s not worth dying for. 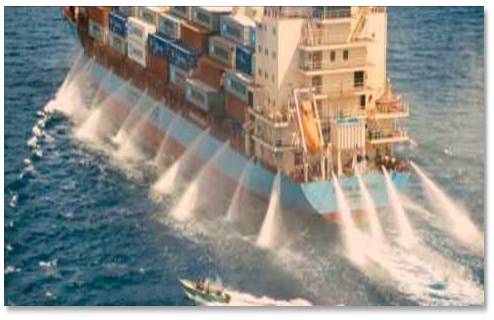 A number of countries, including China, Japan and Malta (Malta??) have increased their naval presence in these waters to deter hijackers. In December of 2012, the European Union Naval Force Somalia launched Operation Atalanta the EU’s anti-piracy operation off the coast of Somalia. The goal is to “have a negative impact on the “risk/reward” balance for those who benefit most from piracy and to damage the underlying business model . . .”

This is admirable and to be applauded. But I wondered by Maersk and Waterman would think that it’s acceptable to send a ship’s crew into harm’s way without any means of protection. If you don’t want to arm the crew, or if it’s illegal to arm the crew, fine. Put a security team on each ship the way the U.S. puts Sky Marshals on airplanes to counteract hijacking. I’m sure that security companies like Blackwater Worldwide would be happy to provide such protection. 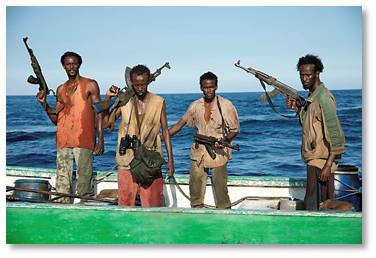 Second, the movie did its best to give the hijackers motives that humanize them and create some rationale for their actions as well as sympathy for their poverty. Sorry, it didn’t work for me. Blowing the pirates’ boat out of the water seemed like the best response to their attack. If you change the risk-reward balance, then the “bosses” back in Somalia would not be sending poor villagers out to hijack commercial ships and hold their crews for ransom.

And clearly the piracy did not alleviate the poverty of the locals much. Their village was a sun-baked dump, what Obi-Wan Kenobi would have called, “a wretched hive of scum and villainy.” When one of the pirates bragged to Capt. Phillips that he had previously captured a Greek ship and gotten a $6 million ransom, Phillips asks him why he hasn’t then retired in luxury. The Somalis are not doing this for their own profit—they are the tools of others who take the money they extort and leave them in poverty.

Third, I just love watching our elite military teams in action. Captain Phillips was rescued by the now-famous Seal Team Six. They parachute out of a plane—something you would have to push me kicking and screaming to do—and then they tuck their arms close to their sides and dive through the air to reach their landing point faster. OMG. During the operation, their adrenalin levels may be jacked but they work coolly, calmly and professionally, putting their training into practice with none of the grandstanding, wisecracks and rash actions that we have come to expect from Hollywood’s macho “heroes.” They wait patiently for their opportunity and then they take it without hesitation. These are the government employees I want on my side if something ever goes sideways.

Captain Phillips is a terrific movie and I recommend it to anyone, teenagers on up, who want to see how a real-life action scenario played out. It’s detailed and gripping. Like Argo, it succeeds in creating dramatic tension even though the viewer already knows how it turned out.

Tom Hanks does a great job, of course—he always does. The real surprise comes from the young actors who play the Somali pirates. They are all amateurs who were recruited from the Somali community in Minneapolis and their performances are astonishing.

My husband liked Captain Phillips less once the rescue began but that’s when I was really fascinated, wondering how the U.S. Navy and Seal Team Six were going to pull it off. As they used to say on TV’s The A Team, “I love it when a plan comes together.” In Captain Phillips, the plan, and the movie, come together just fine.