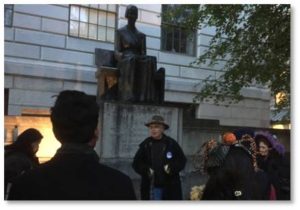 I love Halloween but it had gotten pretty boring around our house. No kids come to the condominium community where we live and our grandchildren have moved an airplane ride away. Rather than stay home and watch TV, I decided to jump into Halloween with both feet.

I volunteered to support Boston By Foot’s annual Beacon Hill with a Boo tour. This tour is given only once a year on a night when Boston’s toniest neighborhood turns into a combination theme park, light show, haunted house, and flash mob. Wow, what an experience!

I showed up in front of the State House a half hour before start time and found what seemed like a hundred people milling around already. Nancy, our volunteer organizer had things well in hand, though. She teamed up tour guides with support guides and we waited in a staging area as she counted off “tourees” into manageable groups and sent us on our way.

We went from stop to stop, walking from the State House to the north side of the hill, through a dogleg covered alleyway, along to Louisberg Square, up and down Beacon Hill. As the night grew darker, costumed kids and adults grew more numerous and the streets became more crowded. Thank goodness no one much seemed to be driving on Beacon Hill last night as everything from Chewbacca to Jaws the Shark to the Stay Puft Marshmallow Man mobbed them. 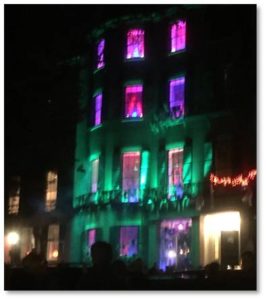 As a support guide, my job was to stay behind the tour group to make sure that everyone kept up and no one got lost. That presented no problem at first, but as the streets became congested keeping folks together was more of a challenge. By the time we reached Pinckney Street, we encountered wall-to-wall people.

Our tourees stopped to look at the costumes and decorations, to take pictures, and to absorb the ambiance. Then I would have to lead them on where Paul, our tour guide, was waiting in the midst of Halloween mania.

Fortunately Paul had glow sticks on his hat and that made him easy to spot. I just kept my eye on those glowing green strips as I rounded up stragglers and moved them forward. When the tour ended on Walnut Street, Paul let me do the Parkman Murder story so I got to talk as well as walk. 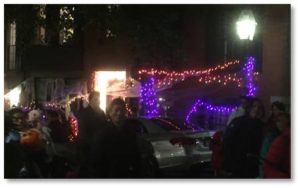 As each group finished, we headed down Beacon Street to the Omni Parker House to get some drinks for parched throats and hot food. The result? Our 12 guides and 23 support people took 243 tourees through Beacon Hill With a Boo and we all had fun.

Maybe I’ll volunteer to guide a tour next year. Maybe I’ll see you there!