I never had the math aptitude to be an architect. Nor did I have any exposure as a kid to information of any sort about a career in architecture. But when we lived in New York City, I worked in communications for Tippetts-Abbett-McCarthy-Stratton for several years. At the time, TAMS was one of the largest architectural/engineering firms in the world and I wrote about what they built.

Later—much later—I studied to be a tour guide with Boston By Foot and their training program is skewed toward architecture as well as history. So, I picked up a few things. Since then, I have learned even more from writing many Posts About Boston, in which I often focus on the history and architecture of a specific building.

That means my interest perks up when I spot news about the city’s buildings, for better or worse. This week, three news items about Boston architecture popped up—two positive and one potentially so. As is often the case with The Next Phase Blog, however, I wrote more than what fits into one post. So, I’ll start with the good stuff and follow up with news about a troubled structure.

The Boston Public Library posted a drone tour of their amazing Central Branch building in Copley Square, designed by Charles Follen McKim. Called “Take Flight,” the video starts with a 360° loop around the tower of Trinity Church before swooping through the library’s tall front doors.

The McKim Building from Copley Square

Then up the central staircase past the Louis St. Gaudens lions and the Pierre Puvis de Chavannes murals and into the massive Bates Hall reading room. During this quick tour—only 3:39 minutes, we fly with the drone into the McKim building’s beautiful courtyard with its sculpture of Bacchante with Faun by Frederick MacMonnies.

The aerial drone also gets us closer to the mural series titled, “The Triumph of Religion” by John Singer Sargent than we can by standing in the hall. These gorgeous, color-saturated and gilded paintings easily equal anything I have seen in the buildings of Europe. 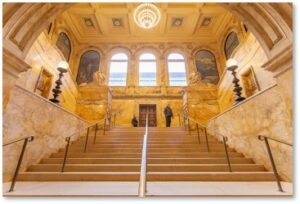 Start your day with this marvelous visual gem and it will lighten your heart. It might also motivate you to go to the BPL and see “the people’s palace” for yourself. If you do, get the most from your visit by taking one of their tours with a trained tour guide.

NOTE: Given my druthers, I would love to see other drone footage that focuses on the McKim Building’s artwork, including the beautiful equine murals in the Children’s Room. What a tour that would be!

The Online AIA Guide to Boston

The American Institute of Architects has released the newest version of their AIA Guide to Boston Architecture. This new app dropped last week in Apple’s AppStore and on Google Play. 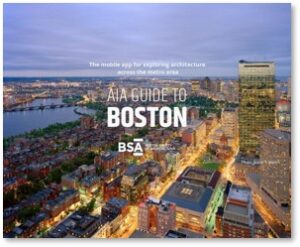 Unconstrained by book size or weight, this new app puts Boston’s architectural highlights in the palm of your hand. You can look at:

The online guide works for research as well as the sheer enjoyment of learning about Boston’s most interesting places and structures. It’s free. Download it and get started.

I have the Third Edition of the “AIA Guide to Boston” by Susan and Michael Southworth on my bookshelf. It is thick and heavy (also, not free) and I use it regularly when writing about Boston’s buildings. Now I have another AIA resource to work with. Whoopee!