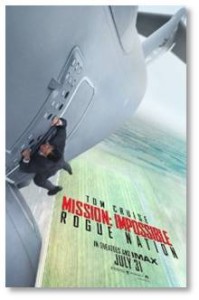 We saw the current installment in the Mission Impossible franchise, Rogue Nation, this weekend and enjoyed it. As with other movies in the series—as well as the TV show on which they are based—the film combines bold feats, technical wizardry, flawless disguises, fearless teamwork, political intrigue and incredible, mind-boggling stunts to create 131 minutes of non-stop action worthy of the original Mission Impossible team. In case you forgot, they were Peter Graves, Barbara Bain, Greg Morris, Martin Landau, Leonard Nimoy and Peter Lupus.

From the first incredible—and much publicized—stunt of Tom Cruise leaping onto an airplane that’s taking off to the final scenes in the hall outside of a Congressional hearing, I was totally involved in @MissionFilm.

Except for one thing. My logical brain kept asking inconvenient questions which, of course, throws one right out of the story. This is stupid because there is no logic involved in this kind of movie even though the whole MI team’s approach to a mission is logical on its face. Every mission depends on meticulous planning, split-second coordination and obsessive attention to detail .But the stories are pure fantasy and we’re always sucked in by those full-face masks that somehow look just like the real person until they’re pulled off, something that would never happen in real life.

You see? Niggling questions like this just kept popping up because in real life we have to plan ahead, pay for things, take time to make or buy what we need, and pack the required clothing ahead of time. We don’t drive brand-new spotless BMWs or climb up and down buildings wearing a floor-length gown. We get injured—and pretty badly—when we even slide over on a motorcycle even while wearing full leathers.

But that kind of thing doesn’t kill the fun any more than it kills the characters in movies like this. To be fair, Tom Cruise did that airplane stunt himself—and he did eight  takes. Watching it, one marvels that he survived even one take. If you don’t want to see the movie you can check out the airplane stunt here. This YouTube video shows you the cables that were erased in the movie version. 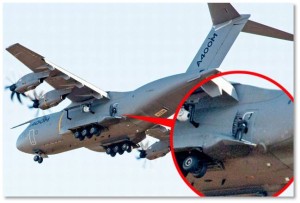 Mr. Cruise also does his own motorcycle work and that adds to the authenticity. Amazing. The man is 53 years old. At that age, I was groaning after a day of working a trade show booth, much less jumping on a moving aircraft or diving into a water intake pipe. BTW: That latter stunt really gave me the willies. The thought of jumping into a pitch-black pipe filled with water traveling at high speed seems like jumping into death to me.

Mission Impossible: Rogue Nation was fun and we enjoyed it. If you’re looking for entertainment without the hindrance of pesky things like mundane real-life concerns, paying for things, getting caught stealing a car, or possessing the will to live, you’ll probably like it, too.

Note: How did Tom Cruise film that incredible airplane stunt in the movie’s first scene? You can read all about it in The Hollywood Reporter’s article, “The Movie’s Cinematographer Tells All.” Here’s what Robert Elswit, the film’s directory of photography, says about Tom Cruise doing his own stunts:

“When he wants to do something, he’ll figure out a way to do it,” Elswit said of working with Cruise. “He’s the most obsessive artist. … If it couldn’t actually be Tom on the plane, I think he wouldn’t want the sequence in the movie. That’s what happened on the Burj [Khalifa skyscrapter in Dubai, for an action sequence in Mission: Impossible – Ghost Protocol]. I’m always stunned. What inside of him makes it possible for anybody to do that kind of shit — and not be scared shitless? He loves it.”

I guess we love it too, because in its first week Mission Impossible: Rogue Nation brought in $51 million domestically and $65 million overseas and took the top box-office spot for the week. With a production budget of $150 million, it’s well on track to become one of the most profitable movies in the Mission Impossible franchise.