“Eat every macaron as the last” ~ Macaron Aurelius

In January I gave myself a culinary challenge as one of my new year’s resolutions—mastering the French macaron.  Many months later I am finishing the project I started.  There was a summer hiatus due to heat and humidity but we are enjoying a beautiful New England fall and it’s time to bake macarons. 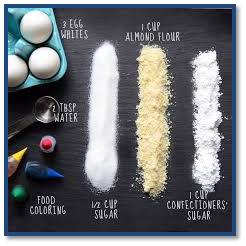 The recipe requires a big chunk of time—like an entire Saturday—which demands planning, a clear calendar and cool weather since humidity is the enemy of the macaron.  On hot and muggy days I was staring at the oven wondering when it would cool off.  Now the crisp days and cool weather are here.  This is my Martha Moment.

I began this project by watching a lot of videos.  Technique is everything and the more videos I watched, the more macaron dos and don’ts I collected.  My goal was to learn how they were supposed to be made before I attempted to make them.  I was afraid of failing and there were so many pitfalls I was certain my efforts were doomed.  I’m an accomplished baker and my confidence was threatened by successful macaron bakers, a bow full of egg whites and some ground almonds.

Call this one wrong and you have an expensive batch of failed cookies.  Some recipes have room to move.  A tweak here, a change there—it’s the cooks prerogative and results reflect skill and a sixth sense for flavor and texture.  The precision demanded by the macaron recipe leaves no margin for ad hoc creativity or error.  I did not expect it to be easy, but I did want it to be worth it.  I wanted the perfect end result.

My first attempts had mixed success.  Over- or under-folding ingredients affects the consistency of the finished product in a noticeable way.  Deflating the egg whites takes practice.  The finished batter should resemble lava.  True confession:  I found a video of a volcano to see exactly what I was supposed to end up with.

I did not push the humidity envelope on this recipe.  I was sufficiently convinced it would have a negative impact and opted not to tempt fate, though some say it’s irrelevant.  Any recipe can be fickle in extreme temperatures.

Oven temperature is important.  I baked them with and without the convection option, concluding convection was not an advantage.  It reduces the temperature and the cooking time and I never seemed to get it just right.  My first cookies were dry and lacked the delicate crunch that is their signature.   Too crunchy happens. 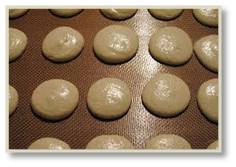 Size matters.  The cookies must be consistent in size so they fit together perfectly when filled.  You achieve this by piping onto a template.  I painstakingly drew one inch circles on parchment paper.  Note to anyone considering this:  draw the circles on the wrong side.  Even the faintest marks will bake into the cookie.  I had an epic failure when I used a magic marker!   Eventually I created a master template on a silicone baking sheet.  It takes practice and a steady hand to pipe out just the right amount.

There is one aspect of this cookie that is open to creative interpretation—the color and flavor of both cookie and filling.  The egg-white base is the perfect blank canvas for anything your imagination can deliver.   Fillings range from the simple to the complex.  From elegant French buttercreams to Nutella, they deliver little bites of deliciousness.

You’d think a recipe with four simple ingredients would be easy to master but the articles I read convinced me the macaron was finicky.  They were partially right.  It’s less difficult than it’s made out to be but you must understand and follow the process.

Several tutorials suggested tempering the egg whites by leaving them at room temperature (aging) overnight.  I could not see a noticeable difference, although I did bring them to room temperature on the day I made them – which is something I do with any recipe that calls for eggs.

One rule of baking I follow is to use the best ingredients you can afford.  Since there are very few in this recipe I experimented with brand names and used really fresh eggs.   I tried ground almonds from Trader Joe’s (inexpensive) and Bob’s Red Mill (yikes!) and I also attempted to grind them myself, which was not worth it.  In my opinion, the cost made absolutely no difference in the quality—I went with Trader Joe’s.

My eventual success let me to The Four P’s of Macarons and some life lessons that can be pulled from a baking challenge.

Nothing about the macaron was impossible; the cautionary aspects of this cookie are true of any cooking effort.  There is a mystique surrounding macarons that make it intimidating.   Yes, there are failures, but those can happen to any cook.   A lot of macaron dogma is the result of someone telling you to do something exactly so…or else.  Some of that dogma is based on fact, but some of it is hype. 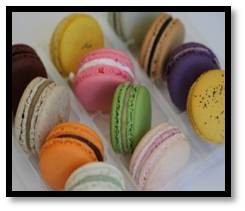 Good technique is important, but there is a common thread among the tutorials that convinced me it was uber difficult and I went into it with that belief.  I gradually realized I was making it harder than it needed to be.  When I decided to use my own judgment and lean on my experience it got a whole lot easier.

It turns out the macaron is time consuming and follows precise linear steps, but it’s not that complicated.  My epiphany in no way diminished my fascination or love for this cookie but it did change my perspective.  Once I stopped being intimidated I was able to enjoy the journey.

Holding these delicate cookies in my hand was a sweet ending.