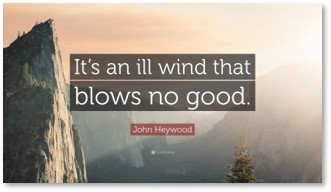 Even the worst of disasters sometimes have positive impacts—mostly unexpected and often somewhat surprising. Here are a few examples, plus unanticipated benefits from the current Coronavirus pandemic.

During World War II, the North Atlantic fishery was virtually eliminated by German U-Boats patrolling the waters. These submarines, along with “pocket battleships” on the surface, made fishing far too dangerous. Governments also re-purposed fishing vessels for wartime uses, like minesweeping. 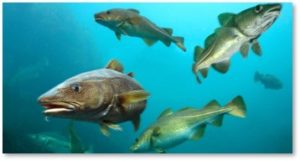 The Result:  The survival rates of marine animals rebounded, increasing overall and resulting in spectacular catches along the North Atlantic seacoast after the war.

Unfortunately, technological advances made during the war made the fishing industry more efficient. In the decades after the Second World War, global fishing expanded and intensified. New, long-distance fishing and processing vessels stayed at sea for months at a time. They depleted this wartime dividend of increased fish supplies by the mid-1950s in the North Sea and by 1960 in the wider North Atlantic.

After the terrorist attacks on 9/11, the FAA grounded all commercial aircraft. You can see the traffic diminish in this video. Canada soon followed. This set the stage for a giant experiment—one that would have been unthinkable in different circumstances. The suddenly clear skies allowed meteorologists to settle an argument about whether jet contrails affect weather. 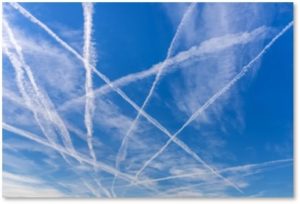 We have grown so accustomed to jet contrails that we barely notice them crisscrossing the sky. In the aftermath of 9/11, however, the skies suddenly cleared—to a level we had not seen since the introduction of commercial jets.

Jet engines create these contrails when they blast out hot air and water vapor. The water vapor freezes in the intense cold at high altitudes. The contrails then expand and drift, forming thin linear clouds.

The Result: NASA scientist Patrick Minnis wrote a paper in 2004, arguing that clouds caused by aircraft may warm the US climate. He said that

“…persisting contrails can spread into extensive cirrus clouds that tend to warm the Earth, because they reflect less sunlight than the amount of heat they trap.”

Mr. Minnis also found that, “increases in cloud cover were more pronounced in populated areas, and stronger in winter, when contrails are bigger.”

Coronavirus and the Canals of Venice

As the countries of the world shut down activity to reduce the spread of the coronavirus pandemic, we have begun seeing an impact on the environment.

The canals of Venice have cleared to such a degree that you can see fish swimming in them. Even more surprising, dolphins have appeared in the canals. Why such a big difference? Because Venice lacks a complete, modern sewage system, the city disposes of household waste in the canals. That’s right, those picturesque canals underneath your gondola are really sewers.

Another interesting fact is that the population of Venice has declined by half over the last 30 years. It has dwindled to about 60,000—and dropping daily—from a high of 164,000 in 1931. At the same time, 55,000 tourists normally pour in every day, for a total of 20 million per year. Those visitors create a lot of waste. 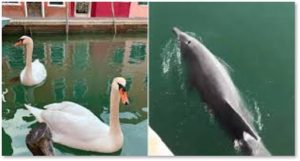 The Result: Now, like jet planes after 9/11, the tourists have disappeared. the coronavirus stopped worldwide travel of all kinds in its tracks. Ocean cruise ships, those giant floating hotels, have ceased operations until the pandemic is over.

The streets of Venice are clear and the vaporetti, motorized gondolas, are no longer plying the canals. The swans of Burano Island can swim undisturbed. Fish have reclaimed the newly clear Venetian canals as their own, if only for a short time.

NOTE: The dolphin is from Sardinia, not Venice.

Airborne nitrogen dioxide in the air over China plummeted as the coronavirus slowed the economy and kept people from traveling over the Lunar New Year holiday. 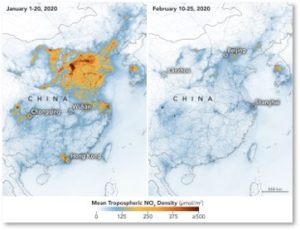 These maps from NASA and the European Space Agency show concentrations of nitrogen dioxide, a noxious gas emitted by motor vehicles, power plants, and industrial facilities. The maps display NO2 values across China from January 1-20, 2020 (before the quarantine) and February 10-25 (during the quarantine).

You can see more specific reductions around Wuhan on the Earth Observatory website, which notes:

“In a preliminary analysis, NASA researchers compared NO2 values detected by OMI in 2020 with the average amounts detected at this time of year from 2005-2019. In 2020, NO2 values in eastern and central China were significantly lower (from 10 to 30 percent lower) than what is normally observed for this time period.”

As the factories shut down and people stopped using their cars, the air cleared. Some areas saw clear skies for the first time in decades.

I think we will see similar results in other areas from the coronavirus pandemic.

With fewer cars on the roads, rush hours gone, and commercial flights cut by almost half, air pollution has to be clearing up. Shuttered factories will help further. These changes are temporary, of course; it may take a while for us to quantify them once the pandemic is over. And it will be over. Life will eventually  return to “normal,” and the human impact on the environment will do the same, for better or worse.

Keep an eye out for reports of how the air, the water, the fish, and the animals respond to fewer humans out and about while humans shut themselves away in homes. We may not know where or when such impacts will appear, but they certainly will. Although we want our daily lives back, I hate to see it happen at the expense of environmental gains.