This is the 15th post in my series about Boston’s Bronze Menagerie.

Boston’s lively and ever –expanding Chinatown has an interesting history and many fine restaurants.  (You can explore the history with Boston By Foot on the May Tour of the Month.) What it doesn’t have is a dragon. Oh, there are dragons on posters and dragons in neon signs. Look carefully and you can find some painted ones in murals and street art that decorate the sides of buildings. 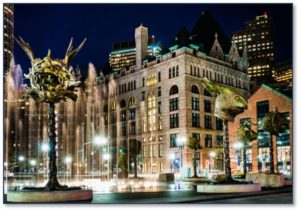 Still, Boston lacks a big, powerful dragon statue and that’s too bad because Chinese dragons control water, rainfall, typhoons and floods. If ocean levels rise due to climate change, we’re going to need all the help with flooding that we can get.  A dragon would give us some real firepower against sea level rise.

Perhaps our Puritan heritage makes us look askance at mythical creatures and find them less compelling subjects for statues than, say, sports figures and politicians. Currently Boston two dragons, though. One is just visiting while the other is a much gentler version that lives far south of Chinatown.

Dragon of the Zodiac Heads

If you’re looking for a big impressive sculpture, the kind of dragon that makes a statement about power, strength, and good luck, you can find one as a temporary resident in the installation, “Circle of Animals/Zodiac Heads” by Ai Weiwei.  It’s on the Rose Kennedy Greenway in the linear park’s Wharf District around the Rings Fountain.

Twelve enormous bronze animal heads represent the 12 signs of the traditional Chinese zodiac in order: Rat, Ox, Tiger, Rabbit, Dragon, Snake, Horse, Goat, Monkey, Rooster, Dog and Pig.  Mounted on poles, each statue stands 10 feet tall and they range from 1,500 to 2,100 pounds.  The installation stays on the Greenway until October of this year, which is the year of the Monkey. The last Year of the Dragon was 2012 and we’ll have to wait until 2024 for the next one.

Although the only imaginary animal in the Chinese zodiac, the dragon is the most vital and powerful of the twelve beasts.  Dominant and ambitious creatures, dragons have sharp tongues and hot tempers.  They employ their  intelligence to handle challenges and take risks, although—fair warning—they do not tolerate criticism. 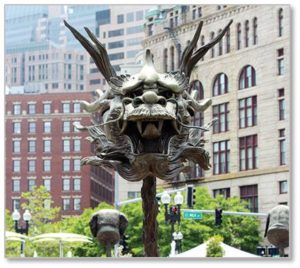 The artist tells us that he modeled Circle of Animals/Zodiac Heads on 12 bronze animal statues that once stood at the Yuanming Yuan, or the old Summer Palace, in Beijing. French and British troops looted the palace during the Second Opium War in 1860 and the heads were stolen. Mr. Weiwei’s reinterpretation is a commentary “to the issue of looting and repatriation of art treasures.”

In this installation, Ai Weiwei has created a particularly dramatic dragon head, one that glares at us from his high perch with mouth agape, sharp tongue curled and teeth bared. This dragon wouldn’t be afraid to confront rising sea levels and turn back the tide. Boston deserves a dragon as fierce as Ai Weiwei’s creature and it’s too bad that we can’t keep such a powerful beast here when the traveling installation moves on this fall.

Lacking that, we have another full-time dragon but he’s smaller, not so scary and much closer to the ground. Named Fuku-Riu, or “Lucky Dragon,” this one eight feet long and inhabits a playground on Nonquit Street in Dorchester. Created by sculptor Nancy Schön, who also did The Tortoise and the Hare in Copley Square and Make Way for Ducklings in the Public Garden, Fuku-Riu may remind you of the imaginary beasts you see in children’s books. 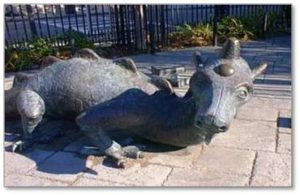 According to Ms Schön, Fuku-Riu possesses a number of special characteristics:

Fuku-Riu provides children with a smooth back on which to climb, sit, or ride.  He also loves families.

Information and Directions to Boston’s Dragons

Both statues are in public parks that are free and open all day. 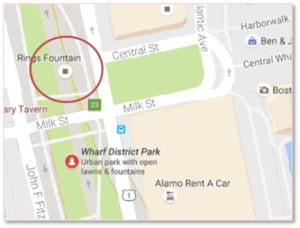 The Ring Fountain on the Greenway

Circle of Animals/Zodiac Heads is located in the Wharf District of the Rose Kennedy Greenway between High Street and Milk Street.  Take the MBTA Blue Line to the Aquarium Station and then walk south along the Greenway to the Ring Fountain.

Parking is available but expensive in the many private lots and hotels along Atlantic Avenue. It’s cheaper on the weekend when you can take advantage of garages that offer one rate for the whole day. 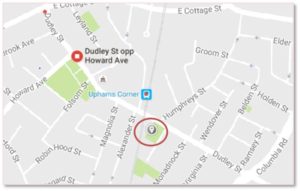