In addition to Pieroni’s Sea Grill, I found a couple of other menus in the stash that somehow came with us when we downsized. Anyone who lived in Boston during the sixties remembers—and probably ate at—a Pewter Pot Muffin House.

Looking Back to Ye Olde Boston

This chain could be found all around the city and down to Cape Cod. It represented Ye Olde Boston and looked back on the city’s history for both food and ambiance. The Pewter Pot décor recreated the early post-Medieval construction that we think of today as Colonial. 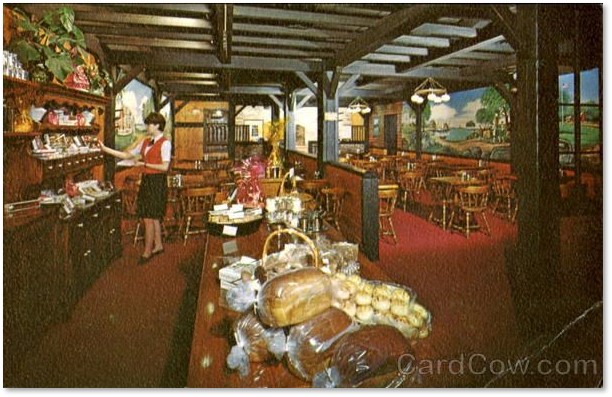 But the food was pretty good. I spent happy hours during dates—especially on cold winter nights—eating the Pewter Pot’s excellent chowder and absorbing warmth from the open fire. The menu offered 24 varieties of muffin, including odd flavors like Fruit Cocktail, Almond Tea, Mint Julep and Mystery. I usually ordered  something simpler and more familiar with my coffee. 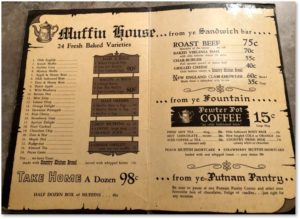 You could order breakfast at The Pewter Pot, of course, although the selection was not large: Ham and Eggs ($.90), Bacon and Eggs ($.80), Muffin and Egg $.40) and a Cheese Omelet (.75). A large mug of coffee would cost you a whopping 15 cents. You could pick up boxes of their muffins and “Country Kitchen Bread” at a gift-shop-style counter at the front of the restaurant. 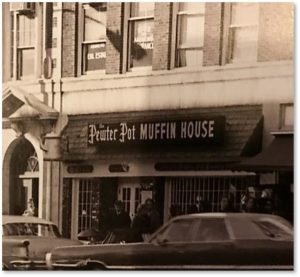 Other people online remember steak but that does not appear on my menu. It offers only sandwiches and only four of those:

For dessert you could choose from the Peach Muffin Shortcake or the Strawberry Muffin Shortcake, both “loaded with real whipped cream” for an additional $.50. Coffee and tea were served in actual, and very heavy, pewter pots.

The clam chowder—”made from a cherished olde recipe”—proved the main draw for me and many others. You got a crock ($.60) or a cup ($.35) of thick, rich chowder loaded with clams. It both filled you up and warmed your insides when the Montreal Express howled down from Canada.

Vincent (VJ) Catania, a native of Chelsea, MA, founded The Pewter Pot chain in 1963—despite the menu’s claims of being “famous since 1831.” For the next 10 years, he expanded the chain to its height of 40 locations. You could find a Pewter Pot Muffin House in almost every neighborhood of Boston and Cambridge and beyond. 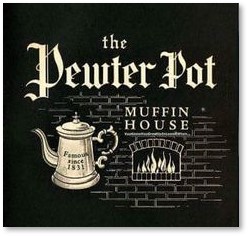 In 1973, Mr. Catania sold all but the Falmouth location and focused on growing a new chain, The Hearth ‘n Kettle on Cape Cod. He passed away in November of 2010 at the age of 81. Today, the Catania Hospitality Group owns and operates five Hearth ’n Kettle restaurants, the Cape Codder Resort and Residences in Hyannis, the Dan’l Webster Inn in Sandwich, and the John Carver Inn in Plymouth.

Boston’s Dining Scene Has Moved On

The Pewter Pot Muffin Houses have been gone for 45 years and Boston’s dining scene has turned decidedly upscale since then. Heavy beams and thick planks have given way to huge windows, Ikea-style furniture, and large airy spaces. I doubt we could find a menu with an extraneous “e” on the end of words anywhere in the city these days. That’s no loss.

Here’s an interesting quote from the back of the menu:

“Coffee brewed in Pewter Coffee Pots made by Paul Revere . . . And then served with hot cakes baked from cherished olde Colonial recipes in the brick oven that was the center of the Early American Home. . . This was a tradition born in the early days of New England. This was the beginning of ‘coffee and.’

We invite you to relive this relaxing tradition with us in the true colonial way . .  Have your coffee with a hot muffin or a hearty Colonial Roast Beef Sandwich, prepared and served to you in authentic Early American atmosphere at the Pewter Pot Muffin House.”

I can tell the menu once hung on my dorm room bulletin board at Northeastern because of the pushpin holes on the corners.