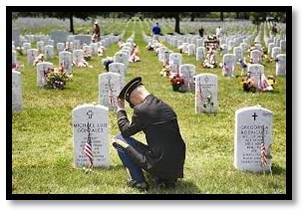 Memorial Day.   One day in the 365 days of our year we are asked to stop and reflect on the sacrifices of men and women who have paid the ultimate price in service to our country. Men and women who gave their lives defending America in wars from the Revolutionary War to the war on terrorism and all the wars in between.

This isn’t something we should have to put a lot of thought into, but many people still don’t know the history or the meaning of this day. Like so many holidays, this one has become commercial.  It is not National Mattress Sale Day, or Big Fun 3-Day Weekend or the Unofficial Start of Summer and We Can Wear White day.  It is the day we honor our fallen soldiers.

Memorial Day was started by former slaves on May, 1, 1865 in Charleston, South Carolina in honor of 257 Union Soldiers who had been buried in a mass grave in a Confederate prison camp. Southern women dug up their bodies and gave them a proper burial.  These women took it upon themselves to honor enemy soldiers whose final resting place their loved ones would never see.

After the Civil War, General John Logan of the Grand Army of the Republic ordered flowers placed on graves of both Union and Confederate soldiers at Arlington National Cemetery. This was the first official “Decoration Day” on May 30th, 1868. It was intended as an act of unification and healing as both sides were once again a single nation.  This tradition continues today, although a small American flag has replaced the flowers in front of each headstone.

The General’s actions were inspired by local observances throughout America in the years after the Civil War.  In 1873, New York designated the 30th of May as Memorial Day and a legal holiday. By the late 1800s, more cities and communities observed Memorial Day, and several states declared it a legal holiday. After World War I, it became an occasion for honoring those who died in all of America’s wars and was widely observed as a national holiday throughout the United States.

On May 11, 1950, Congress passed a resolution requesting the President to issue a proclamation calling on Americans to observe Memorial Day.  They asked that it be a day of prayer for permanent peace, designating a specific time when the United States might unite in prayer.   It was officially called “Decoration Day” after the first one in 1868.

Twenty one years later, in 1971, President Richard M. Nixon made it a federal holiday, officially changing its name to Memorial Day.   On December 28, 2000, Congress passed the National Moment of Remembrance Act, signed by President Bill Clinton.   It asked Americans to pause for one minute at 3 p.m. local time and think about those who have paid for our freedom with the ultimate sacrifice of their lives.

3 p.m. was chosen because it is the time when most Americans are celebrating a national holiday whose commercial value has outstripped its original meaning.  We keep that meaning alive by honoring more than one million American soldiers who gave their lives for freedoms every American enjoys and must never be taken for granted. 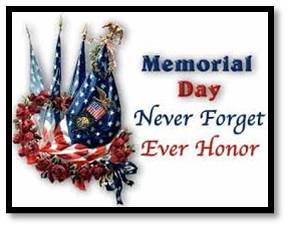 Today we honor those who never came home.   We are profoundly indebted to the soldiers who have given their lives defending not only our country, but each of us as individuals.  I am here today because both of my parents served in and survived two wars.  My son proudly wears an Army uniform and understands the profound depth of his call to duty and to arms.

On this day, I hope you will honor the 3 p.m. remembrance of our soldiers and the words of President Harry S. Truman, “Our debt to the heroic men and valiant women in the service of our country can never be repaid. They have earned our undying gratitude. America will never forget their sacrifices.”

On this holiday weekend, let’s not forget the meaning behind Memorial Day.  America is the land of the free because of the brave men and women that fought to make it so.