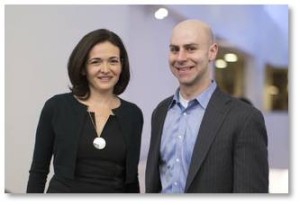 Facebook Executive and Author Sheryl Sandberg has teamed up with Wharton Professor and Author Adam Grant on a series of four essays about working while female  that are being published by the New York Times and on LinkedIn.

The first two pieces on working while female are enlightening and discouraging at the same time. For the greatest effect, read the articles in their entirety:

We all know the stereotype of the chatterbox woman, the one who just talks and talks about nothing at all while her boss, husband or boyfriend is trying to think more serious masculine thoughts. When it comes to the workplace, however, the opposite is actually true. Women in the office are more likely to zip their lips and keep their thoughts, ideas, insights, and innovations to themselves.  Why? Because they know from sad experience that the men around them will (a) interrupt them, (b) ignore them, (c) jump on their ideas and appropriate them for their own aggrandizement, and/or (d) criticize her for being too talkative.

It’s so much easier and much less painful to just keep quiet. The unfortunate result is that the company misses out on thoughts, idea, insights and innovations that could solve problems, open up new markets, create a line extension, reduce costs and increase profitability. The woman may lose in terms of her career but the organization that allows men to silence her loses, too.

When a Woman Interrupts a Man 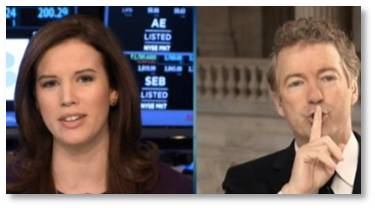 In “Speaking While Female,” the authors discuss this experience in settings from the office to the United States Senate, places where men outtalk, override and discount their female colleagues.

Want to know what happens when a woman interrupts a man? Sen Rand Paul just demonstrated that when he shushed CNBC Anchor Kelly Evans with a raised finger and the admonition to “calm down a bit” when she interrupted him during a discussion on his budget proposal. Clearly he perceived her aggressive interview style — which is commended in men — as hysterical. Even Fox News described his behavior as “ungentlemanly.”

The Value of Diversity

Why is this important? Simply because studies have shown that more diverse companies that include and involve women at every level, up to the board room, do better financially.

It’s that simple. Or is it?

For male executives with a fiduciary responsibility to the company and who are focused on the bottom line, listening to the women they have hired should be a slam dunk — but it’s not. The recommendations in this essay should provide an easy and fairly painless way for a CEO. to improve the experience of working while female, yet the obstacles are entrenched.

Office Housework and Getting Ahead

The second essay deals with the persistent but distressing realty that, “in workplaces around the world: Women help more but benefit less from it.” Again, we encounter a stereotype. This time it’s of the woman who brings cookies to a meeting, mentors a younger staff member, plans the office holiday party, reserves the meeting room and ensures all the needed supplies are there, counsels a distressed colleague, and performs myriad other tasks that range from office work and camaraderie to education, problem solving, teamwork and efficiency. She does all this selflessly and with no hope of advancement. Bull puckey.

This essay says that when a woman helps others or contributes to the efficient running of the workplace, her contributions are taken for granted while a man who does the same things is rewarded. Conversely, a woman is punished for refusing to help but a man can decline without fear of backlash.

The Wasted Energy of Working While Female

The authors found that, given identical amounts of help, “a man was significantly more likely to be recommended for promotions, important projects, raises and bonuses. A woman had to help just to get the same rating as a man who didn’t help.” To win, a woman had to find ways of helping that were more efficient for promoting their contributions. In other words, they had to do their jobs, contribute outside of their regular responsibilities, figure out how to do so in a way that male executives would acknowledge and appreciate, be more visible in her efforts to help, and make sure she didn’t appear at any point to be overly nurturing. That’s all energy men don’t have to expend just to get the same, or better, result.

Oh, and all the wasted energy or working while female takes away from the woman’s ability to do the job she was hired for and contributes nothing to the company’s bottom line.

The Other Half is Winning 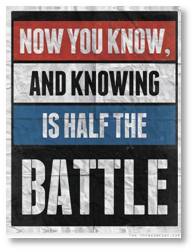 If knowing is half the battle, then the other half is winning the battle. That means taking action, doing something, making changes, setting new rules, overturning stereotypes. The authors are doing a great job of raising visibility for the first part. But it’s been seven years since that McKinsey report on working while female was published and we haven’t seen major changes in how men treat women in the workplace.

@SherylSandberg has the clout and the visibility to get the attention of America’s executives while @AdamMGrant adds the research capabilities and academic credentials. They make a good team. I’m looking forward to the next two essays.

Note: Sheryl Sandberg is the chief operating officer of Facebook and the founder of LeanIn.org. Prof. Grant is a professor at the Wharton School at the University of Pennsylvania and the author of “Give and Take.”