We are living in interesting times.
Be careful.

The Chinese warned us about them because, as the Chinese well know, the term “interesting” covers a lot of territory. You might think the phrase Is a blessing but it’s really a curse–and only the first part of three. The whole curse says,

“May you live in interesting times. May you come to the attention of those in authority. May the gods give you everything you ask for.”

The very forces that create interesting times are often the same things that create havoc, disaster, death and destruction.

The High Price of Interesting Times

Have we gotten past the connection between interesting times and heavy casualties? We can argue both sides of that one. Compared to the eruption of a volcano, the religious and governmental upheaval of a whole country, or war at its worst, today’s interesting times seem downright mild. No nascent Oliver Cromwell or Jefferson Davis will likely rise up and start a new civil war. 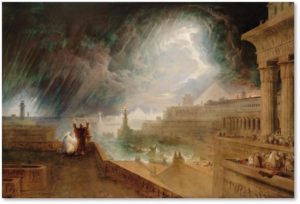 We have a President accused of malfeasance that amounts to extortion and treason. Our Congress is being dragged, kicking and screaming, to act at long last and do something about it. The American people either takes opposite sides across a yawning gulf of politics and perception or ignores the whole thing entirely. Interesting, indeed.

This inflection point in American history can result in a variety of outcomes. Nothing is certain except one group or another will end up angry and feeling hard done by.

Impeachment of a president has precedent in American history. Both Andrew Johnson and Bill Clinton were impeached, although neither was convicted in the Senate. Richard Nixon would have been impeached but he resigned before the House could act and then was pardoned by his successor. While no one is above the law, President Nixon certainly skated around it.

Buckle up, folks. The next few weeks or, more probably months, will see a lot of history being made. I suspect that it will be like watching sausages being made: both messy, and surprising. Making sausages requires some skill, though, as I learned when trying it in Germany. We will see who is more skilled at employing the law, following procedure, educating the American public, motivating their political base, and pulling justice out of chaos.

Emerging in One Piece

At times it may feel like a volcano has exploded, although literal fire will not rain down from the sky. At others we may think our own neighbors can’t be trusted, although Joe McCarthy is long dead. Some of us will follow the proceedings very closely while others will ignore them, focusing their precious time on getting through life and paying the bills.

May you live in interesting times? We’re there, baby. Turmoil lies ahead and we have not way of knowing who the winners and losers will be. I hope we come out the other end in one piece, stronger as a country, united as a people, and focused on the future. Is that too much to hope for?