We were away last weekend for a family celebration in New Jersey and decided to break up the return trip with an overnight stop in Manhattan. Our goal was to see the new American Wing at the Metropolitan Museum of Art. Having registered at our midtown hotel, we took the subway to a museum that appeared radically different from the one I remembered. First, we caught lunch in an enormous cafeteria that reminded me of the Food Halls at Harrods, if a tad less ornate. 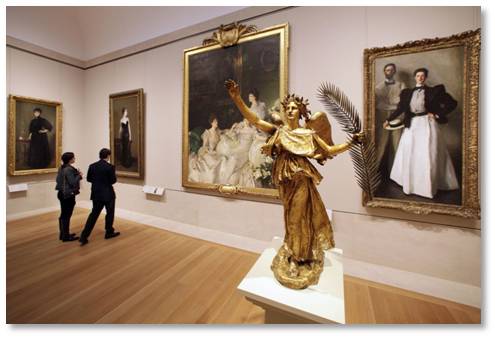 Upstairs, we found the Met’s American Wing and spent the entire afternoon going through room after room of the 75 galleries filled with magnificent paintings, sculpture, furniture, architectural elements and artifacts. It is an amazing collection housed in an architectural triumph.

When, upon its 2012 opening, I read Ada Louise Huxtable’s review of the new wing, I wondered how long it would take her to compare it to Boston’s Art of the Americas Wing (11 paragraphs) and whether she would find Boston lacking by comparison (yes). Having experienced both museums, however, I find that I agree with Ms. Huxtable for the most part.

In “The New World Reborn,” she says, “The paintings are arranged chronologically and thematically, reflecting a progression of periods and styles. Otherwise the galleries are conspicuously empty except for a few carefully selected, strategically positioned sculptures with the most relevant relationship to the work on display.” This arrangement makes it easy to proceed from one gallery to another, grasping the room’s subject matter easily. There are rooms dedicated to nineteenth-century portraits, the Hudson River School, America and the ocean, the African-American experience, the Civil War, etc.

The galleries are also bright and inviting, although I would recommend adding more seating. I was nursing a cold and a sinus infection and needed to sit down periodically. Fortunately, art museums are well humidified so I could at least breathe all afternoon.

The anchor of these galleries is Emanuel Leutze’s enormous—and beautifully restored—1851 oil, “Washington Crossing the Delaware.” At 21 feet wide and 12 feet high, this massive work takes up an entire wall and is enhanced by a frame that is only slightly less impressive. 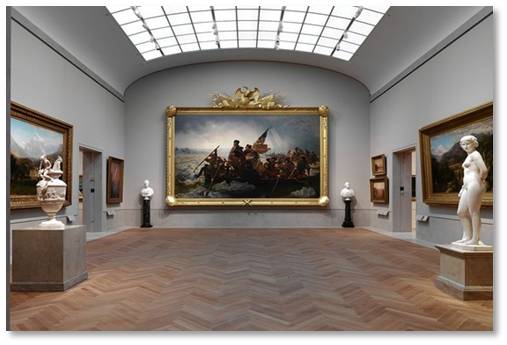 The original frame was lost, although it beggars the imagination to think of something this big and this ornate actually going missing. A recently discovered Matthew Brady photograph of the framed painting gave the Met a model for creating a replacement frame as spectacular as the original. In “The new 3,000-pound basswood frame is surmounted by a huge eagle, multiple flags, and two cannons. It was created by master wood carver Félix Terán in an old eggroll factory in Long Island City, Queens. During its design, the New York Times reported that, “Gilding such an enormous frame will require more than 12,500 3.5-inch square sheets of gold leaves, 1/250,000th of an inch thick, at a cost of more than $12,000.”

The painting, which is familiar to every American schoolchild, depicts a dramatic moment in the American Revolution when the Continental Army conducted a surprise attack on an encampment of Hessian mercenaries. To do it, Gen. Washington had to ferry 2,400 men and horses across the ice-choked Delaware River so they could march to Trenton, NJ, and defeat the Hessians, who were celebrating Christmas.

To contemporary Americans, accustomed as we are to TV, 3-D and IMAX movies, it’s hard to imagine the impact this painting had on Americans of the time. While it has been criticized for historical inaccuracies—and one is hard put not to yell “Sit down!” at Gen. Washington—Mr. Leutze used his revisions to increase the painting’s dramatic impact–and thus reinforce the importance of this victory. There was a method to his decisions and it all works.

Eventually they kicked us out into a cold night on Fifth Avenue and we went back to the Marriott for hot chicken soup. Ironically, in celebrating the American Experience at the Met, we had missed the New England Patriots’ 26-26 loss to the Denver Broncos in the AFC Championship game. I think we got the better end of the deal.