As I reported previously, Boston’s Innovation District is growing by leaps and bounds with new buildings going up on a regular basis and companies signing contracts to occupy the space. The two old “signature restaurants” that once drew people here—Anthony’s Pier 4 and Jimmy’s Harborside—are long gone, victims of the same old-school thinking that took down the big companies I listed in “Can ‘Boston Strong’ Mean Innovation Leader Once Again?” back in February.

The latest addition to #IDBoston is a new 17-story office building from developer Joseph F. Fallon. Casey Ross reports in the Boston Globe that this building is being constructed along Northern Avenue, the spine of the Seaport and the South Boston Innovation District. Major tenants will be law firm Goodwin Procter LLP and top accounting firm PricewaterhouseCoopers. In February, real estate investment firm Senior Housing Properties Trust paid $1.1 billion for two nearby office towers that now house the headquarters of Vertex Pharmaceuticals, a biotech research firm.

Success is sometimes accompanied by challenges, however, and the Innovation District is no exception. Putting a name on an area does not make it happen—or happen the way you imagined. Effective city planning requires more work than that and the devil, as we all know, often lurks in the details. 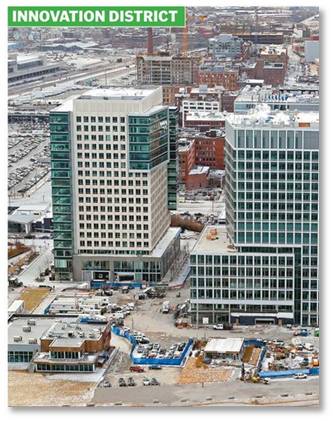 Rents: An Innovation District is, by definition, designed for startup companies but many of the firms moving into the area are anything but. Take the three listed above, and add other big companies like Manulife Financial and you begin to see a trend.

Startups don’t have the deep pockets for Class A office space that major law firms and public corporations do. Usually they search for more affordable rents in less prestigious surroundings. The startup Digital Equipment Co. moved into an old cotton mill in Maynard not for the historical ambiance or the prime location but for the low cost.

A typical challenge for startups is finding office space in strip malls, above a Costco, through a sublet, in a loft, or in a re-purposed factory, and those unlovely environments are more common than floor-to-ceiling windows, harbor views and carpeting up to your ankles.

Costs Going Up Along With the Towers

So it’s no surprise to see that the popularity of the Seaport / Innovation district means that rents are going up . . . and up . . . along with the new office towers. @BostonGlobe’s Mr. Ross says exactly that in “Office rents soaring in city’s Innovation District.” Rents there are now less than 1% cheaper than in Boston’s tony Back Bay, “making both districts the most expensive office space in the city.” Mr. Ross acknowledges that this represents a double-edged sword.

“The increase will help developers finance construction of expensive new buildings, but it will also make it more difficult for the small firms that have driven the district’s growth to continue to move there.”

Or to stay there, for that matter. Rents for the area’s Class B space in re-purposed warehouses have already gone up by 20%. The free market will determine whether innovative companies can continue to afford the Innovation District. 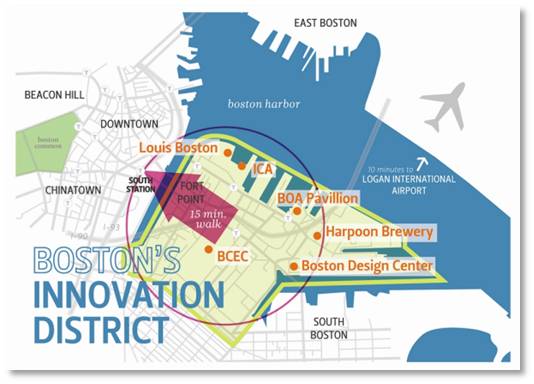 Success also means putting thousands of new employees into a geographically restricted area. The @SeaportDistrict is bounded on two sides by Boston Harbor and on a third by the Fort Point Channel—with no major transportation projects planned to alleviate the influx and outgo of commuters. This is where city planning comes in because the free market can’t be as effective.

Commuters going west can get onto the Massachusetts Turnpike from the Seaport but that typically locks up around the Cambridge tolls and the Watertown Square exit. Those heading south can go through the streets of South Boston to the already-congested Southeast Expressway. East means a water taxi to Charlestown or Logan Airport. If you’re heading into other Boston neighborhoods or north of the city, however, you have a bigger problem. Only three vehicular bridges cross the Fort Point Channel and they lead right onto crowded Atlantic Avenue. Once you have made it that far, you can get onto the already-congested Expressway but it’s not a prospect I would want to face every night.

What about public transportation? The Silver Line is not a subway, as you would expect in a part of the city that is “made land” and pretty much at sea level. It’s just buses that, except for a few tunnels, run on the same roads and across the same bridges as commuter traffic. So there’s no advantage there. A rail shuttle to the Back Bay that was announced last September is probably two years out. Of course, if you’re working the kinds of hours that startups usually require, rush-hour traffic is not a problem. You’ll be coming in before the morning commute and leaving well after 5:00 p.m. That’s if you commute at all, however.

Housing for the One Percent

One of the advantages of starting new companies in Boston is attracting the young people who want the city’s active night life and the opportunity to meet other young people—something which Boston has never really managed well. But those young folks don’t earn the salaries that pay the kinds of rents demanded by Boston landlords in the luxury buildings that are the only housing under construction.

So young folks might have to scale down those visions of a one-bedroom unit with a balcony overlooking the waterfront. The free market is offering instead some newly planned micro-apartments. These will range from 375 to 450 square feet (currently the minimum), not exactly spacious by any standard. The hip young “bros” who are expected to rent them won’t likely spend much time there, though—they’ll be too busy working. And that’s good because these mini spaces are designed only for sleeping and maybe some more work. With a galley kitchen, tiny bath and Murphy bed, who would want to do more? It’s the same philosophy Las Vegas uses with its bare-minimum hotel rooms, only the goal there is to keep visitors in the casinos. 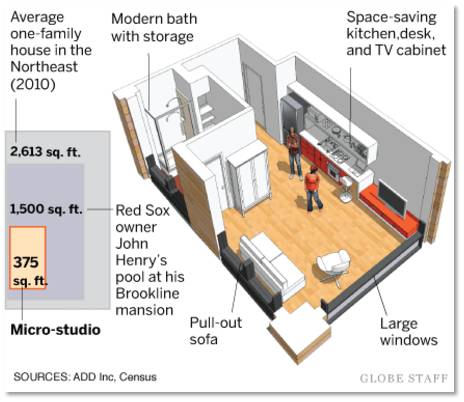 And forget a car. On-street parking in the Seaport District is extremely rare and the garages and lots that provide the only option cost bucks. We’ve tried going to eat at the hot new restaurants that are popping up on Northern Avenue only to find that it’s valet parking or a long hike, even from the paid lots. Of course, Zipcar is moving its headquarters to the Seaport District so residents can always get wheels when they need them.

Aging Out of Boston’s Innovation District

Eventually and inevitably, all those trendy young folks will meet up, hook up, and stay together. They’ll even start families. It’s difficult to raise children in an apartment the size of a one-car garage, however, and that means they’ll start looking for more room, more affordable housing, yards for children to play in, and good school systems. All those things can be found—wait for it—in the stodgy suburbs. So the hip young families will move out and discover that commuting into Boston, especially from the west, is really difficult and getting all the way into the Seaport District is even harder.  This is going to be a real challenge for Boston.

Perhaps then companies will move back out to the less trendy but much more convenient belts around Routes 128 and 495 where office space is cheaper, commuting is easier, and housing is affordable. Then the cycle will start all over again.