Daylight-Saving Time (DST) is the seasonal change that borrows an hour from our circadian rhythm in the spring and gives it back in the fall.

For the record, I am not a fan. This time change is a circadian rhythm wrecking ball. It is kryptonite to my already-challenged sleep cycle and weakens my superpowers. My internal clock tries to adjust, but my body can’t.

Why shift time for one measly hour twice a year? Gaining that hour does not compensate for losing it again eight months later. It amazes me that anything this ridiculous actually became a law.

The idea of springing ahead and falling back no longer serves a purpose. It’s time to leave time alone.

Whose Idea Was This?

Most people think Ben Franklin invented Daylight-Saving Time, but the real blames belongs to a New Zealand entomologist named George Hudson. Daylight Saving Time was his idea, back in 1895. Prior to that, people relied on the position of the sun in the sky, organizing their life and work around daylight hours. 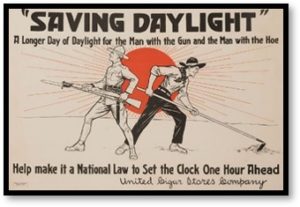 However, Englishman William Willett began the time-change crusade when he published his manifesto “The Waste of Daylight” in 1907, urging Britain to change the clocks twice a year.

Willett believed “the sun shines upon the land for several hours each day while we are asleep” and there “remains only a brief spell of declining daylight in which to spend the short period of leisure at our disposal.”

He believed the concept of daylight saving would reduce the use of artificial lighting and increase the amount of time people could enjoy sunlight. He lobbied Parliament until his death in 1915 without seeing the law passed.

The first Daylight-Saving Time policy began in Germany on May 1, 1916, hoping it would save energy during World War I. Though Germans were the first to change their clocks, it’s likely they borrowed the idea from Britain, who then enacted the policy right behind Germany.

All Those in Favor

The logic behind DST is that we spend more awake time in the evenings than in the mornings. By extending daylight hours, we benefit from more time in the sunshine.  People enjoy more socializing, and (some claim) increased mental health benefits.

Changing the clock means spring is here. This simple act lifts the dreariness of dark winter days by offering hope that soon we can enjoy the warmth of the outdoors after the workday is over.

Commuters and highway safety people know that increased daylight means fewer accidents and safer driving conditions because it easier to drive in daylight.

Farmers. Contrary to popular belief, DST did not benefit farmers. Farm schedules operate by sunlight, not by the clock. Plowing and harvesting align with the sun’s position. Daylight-Saving Time means less time in the morning to get their milk and harvested crops to market. If a driver or supplier comes to work an hour later, it throws off their schedules.

Businesses that rely on people staying inside are not DST fans. Television ratings traditionally plunge each spring as people turn off the box in favor of outdoor activities. Prime-time television shows lose an average of 10 percent of their viewers on the Monday after the clocks are changed.

The movie industry hates Daylight-Saving Time because people are less likely to go into theaters when sunlight offers so many other options. 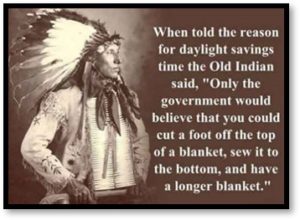 It required states to either adopt it entirely or opt out. Arizona (with the exception of the Navajo nation) and Hawaii opted out. In Arizona the longer the sun was up at night the more energy households used during the 100+ degree summers. Hawaii is so close to the equator there is minimal change in the time between sunset and sunrise.

In 1986, the U.S. started observing seven months of DST, an extra month that sports industries and manufacturers of barbecue equipment claimed was worth between $200 and $400 million. In 2005, the Energy Policy Act passed, adding four weeks. Today the U.S. and approximately 70 other countries observe eight months of Daylight-Saving Time. Domestically, 48 states recognize it,

It took less than one minute to pass but it is not a done deal. It still has to go through Congress but it is my hope that Florida will be joining Arizona and Hawaii, becoming exempt from springing ahead and falling back.

Until then, I changed my clock just like everyone else, saying hello to daylight-saving time until November comes around.