January—named for the two-faced god Janus—is a time of endings and beginnings, changes promised and changes made, doors opening and doors closing. So it’s appropriate to talk about a set of doors that once remained firmly closed to keep criminals inside but are now open to welcome the public. 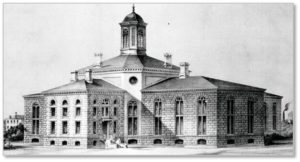 The Charles Street Jail as designed in 1848

Not often do we get the chance to walk freely through an abandoned building that has been brought back to life. The Liberty Hotel gives us that opportunity courtesy of a $150 million renovation of the old abandoned Charles Street Jail. This collection of luxury rooms and suites welcomes you with a 90-foot tall atrium that was once a hallmark of enlightened prison design.

The original Charles Street Jail was built between 1848 and 1851 from a design by architect Gridley James Fox Bryant in collaboration with Rev. Louis Dwight, a noted prison reformer with whom he shared an office. Rev. Dwight promoted what was known as the ‘Auburn Plan” after a prison in Auburn, NY. His 21 principles defining what makes a “good prison” included sunlight and natural ventilation as well as provisions for the prisoners to congregate during the day. This marked a sharp break with previous penal practices that kept inmates separated and in the dark.

Mr. Bryant built the jail of Quincy granite in the “Boston Granite Style,” massive, solid and dignified, but his design incorporated Romanesque and Renaissance forms as well. The structure had a cruciform style with four wings so the prisoners could be segregated by sex and type or severity of crime. 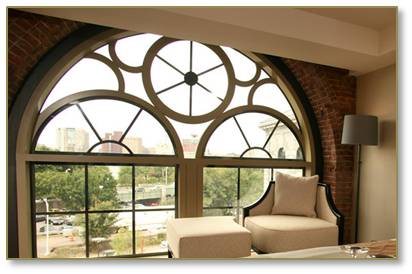 The windows had articulated, wedge-shaped stone “voussoirs” that are characteristic of French design. These windows were described as admitting light “four times as great as that in any prison yet constructed.”

Mr. Bryant designed an impressive cupola to cap the rotunda but this light-admitting feature was reduced in size to save money. It later deteriorated so badly the authorities removed the cupola altogether in 1949.

The Charles Street Jail exemplified the Boston Granite Style of the mid-19th century. Historians said the building, “resonated with a strength and dignity appropriate for the era and for Bostonians’ sensibilities.” It became the prototype design that would influence later prison design around the United States.  It is now a national Historic Landmark. 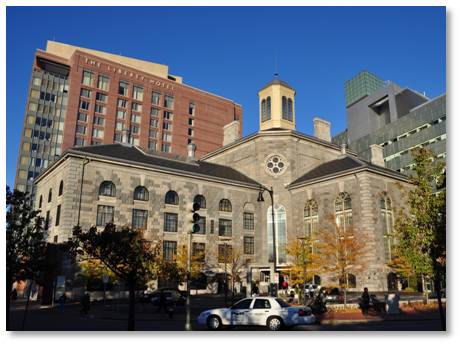 In its day, the jail housed several prisoners of note, including Malcolm X. Ferdinando Sacco and Bartolomeo Vanzetti., James “Whitey” Bulger, suffragists, the crew of a German U-Boat and a future Mayor of Boston—James Michael Curley. They, along with more common offenders,occupied small (8-foot x 10-foot) cells with barred iron doors. Prisoners were allowed to exercise in the yard that is now a beautifully landscaped courtyard, as well as to congregate in the rotunda. Guards enforced the rule of silence however.

It’s ironic that a building created out of humane ideals to house the condemned should have been itself condemned 122 years later for having inhumane conditions that violated the Constitutional rights of its prisoners. The U.S. District Court ruled on this in 1973 but the prisoners were not moved to the Nashua Street Jail until 1990. The old structure remained empty and crumbling at the end of Charles Street for 17 years.

The adjacent Massachusetts General Hospital purchased the hulk in 1991 and sought proposals for its re-use. They required that any developer preserve the building’s significant elements. MGH selected Carpenter and Company in 1991.

A team of designers and architects collaborated with historians and conservationists from the Massachusetts Historical Commission, the Boston Landmarks Commission, the National Park Service and the Boston Redevelopment Authority to ensure that the end result balanced preservation with a dynamic new use. To ensure adherence to Gridley J.F. Bryant’s creative vision, they tapped his original architectural drawings.

The rotunda then and now

The Liberty Hotel was redesigned by by Cambridge Seven Associates and Ann Beha Architects, and reopened in the summer of 2007. With the addition of a new wing, it houses 300 rooms and suites and is part of Starwood’s Luxury Collection of hotels.

As part of the restoration, the developers rebuilt Mr. Bryant’s cupola according to its original design. So what we see now is an improvement, not just a restoration. It caps the rotunda, which features the original iron railings on catwalks the guards used to watch the prisoners. The catwalks themselves were made larger to meet building codes. The exposed bricks had to be painstakingly uncovered from beneath 10 inches of white paint.

The building is now owned by the Massachusetts General Hospital.  The Liberty Hotel has  a number of high-end bars and restaurants with names that play on the building’s history. You can drink in the Alibi Bar or eat in The Clink or Scampo (Italian for escape). The restoration won the 2008 Massachusetts Historical Commission Preservation Award. Guests, unlike the inmates, have a spectacular view of the Charles River. 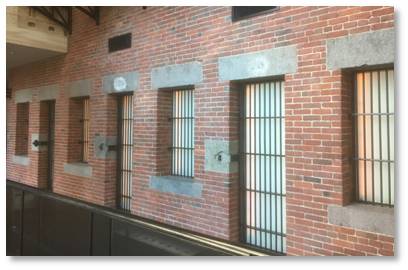 When you visit the Liberty Hotel, walk down the corridor to the left of the Concierge Desk. There you will find a mini-museum that includes a row of the original cells and iron-barred doors, one with an old lock.

Look on either wall and you will see plaques that provide information on  Gridley J.F. Bryant and the Boston Granite Style, the prison’s history, the building’s restoration including the new cupola, and the preservation award.

We were walking back to the rotunda when several young women passed us and one of them said, “Isn’t it cool to be in a place where murderers used to be?” She might not have thought so if she had been in the original prison—or met an actual murderer. 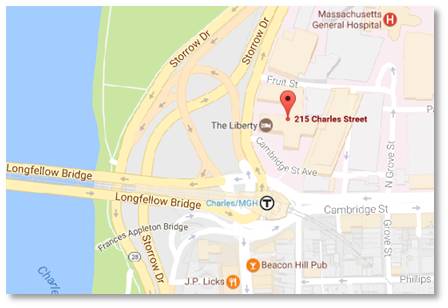 It’s a hotel—just walk right in. Sunday morning is a good time to check out the rotunda and the mini-museum, then have brunch at The Clink. In the restaurant sit next to several more restored cell doors and have one of their signature “make your own” Bloody Marys.

You cannot park around the Liberty Hotel because it sits at the traffic circle where Storrow Drive, Cambridge Street, the Longfellow Bridge come together.  Massachusetts General Hospital occupies the east side and Beacon Hill (resident permit parking only) is right across Cambridge Street. Valet parking at the hotel is convenient but very expensive. If you must drive, either park in the Boston Common Garage and take a pleasant stroll down Charles Street or park in the MGH visitors garage—also not cheap.

The hotel is, however just steps away from the MBTA’s Charles Street Station.  Easy peasy.