Using science fiction to predict future technology is becoming quite the trend. The New York Times chimed in last week with Nick Wingfield’s article on, “Virtual Reality Companies Look to Science Fiction for Their Next Play.” Just to be clear I’m delighted that speculative fiction, long dismissed by readers and critics alike as “space opera” is finally getting some real attention. It’s even better that some attention is being paid to the writers who create the ideas rather than special effects studios that bring them to the big screen.

So I hope it doesn’t sound like whining when I say that I do wish that the inspiration went beyond robots in the aisles at Lowe’s Home Improvement and yet another virtual reality world that eats up time but produces nothing.

Real problems exist in this world that need real solutions. There’s only one reason why we can’t apply innovation to fixing, ameliorating or eliminating those problems: the profit motive. The typical pattern is that someone invents a technology and then shakes the money tree for funding that will allow him/her to build a company that will eventually become profitable.

That opens the door to an “exit strategy,” which means that the startup firm will either be bought by a larger company or go public and sell shares. The returns from either approach pay back the investors who then “exit” and go on to funding the next idea.

When the Model Breaks Down 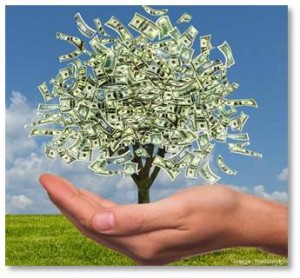 When it comes to real-world problems, though, this model breaks down because the kinds of products needed aren’t going to be bought by the one percenters, or gearheads who want the latest toy, or even the few American left in the middle class. Those products are needed by people in crisis, or the poor. Alternatively, they would solve global problems that can’t be funded by any one country, much less one person.

Now and again I see an article about such a technology but they never seem to go anywhere. That’s probably because the profit motive isn’t driving adoption but it doesn’t mean that the products shouldn’t be adopted. A major organization like the Bill and Melinda Gates Foundation or the Clinton Foundation might do it—but only if the product solves one of the defined problems on which they focus. If not, the product becomes an orphan and the people who would benefit never get to see it.

Here are three of the problems I would like to see solved by future technology, along with solutions that have already been developed: 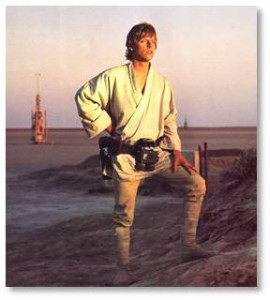 Luke Skywalker with vaporator (in background)

We all know that parts of the world suffer from water shortages, either seasonal or as a result of climate change. And what was Luke Skywalker doing when we first met him? He was repairing one of the vaporators on Uncle Owen’s moisture farm.

A larger but more attractive version of those devices has been developed by designer Arturo Vittori and Andreas Vogler. Their Warka Water towers are inexpensive, easily-assembled structures that pull gallons of fresh water from the air. Even in dry sub-Sahara Africa, the towers can extract more than 25 gallons of water a day.

So why are African women—and it’s pretty much always women—still walking miles with heavy jugs to get dirty water from polluted rivers? Why are they exposed to disease, heat, wild animals, rape and murder on a journey to provide water for their families? Because they can’t afford a solution that costs $500 to set up, that’s why. And that lack of funds means no sales, no profit, and no production.

Catastrophes happen everywhere: fire, flood, earthquake, tsunami, tornado, hurricanes. When they happen they leave thousands, sometimes millions, homeless and vulnerable to cold, rain, or heat. What these people need is simple, pre-fab housing that can go up in a day and provide shelter before nightfall. They don’t have to be big and fancy. They don’t even need to have plumbing—at least not at first. 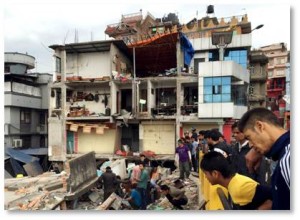 Homes destroyed by earthquake in Nepal

Japanese Architect Shigeru Ban created designs for modular homes using rubble from the earthquake in Nepal as building material. And Mobile Smile created designs for low-cost mobile houses that can be assembled quickly and have a 30-year lifespan. We have the technology. My version would be even simpler and look like giant Legos but I’m not a architect. We have the will. What we don’t have in these situations is a way for someone to make big bucks because survivors of a disaster have lost everything. No money equals no solution.

In many parts of the globe, the most prolific source of energy is the sun, yet women (again) walk long distances to find firewood for cooking fires. Those trips are also fraught with danger. Using wood for cooking depletes the environment and exposes people around the fire—including infants and children—to dangerous levels of carcinogens. Yet if that’s the only resource you have to feed your family, cooking over open fires is what you do. How much better would it be if women in villages and refugee camps, could unpack a simple solar cooker, direct it toward the sun and start making dinner? 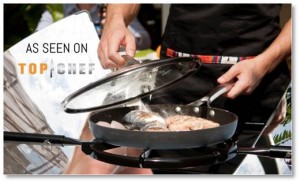 Cooking with a solar grill on Top Chef

Such solar cookers exist. The GoSun stove and the GoSun Grill were featured on this season of Top Chef. Engineering for Change lists 10 solar cookers that work at night. Solar Cookers has sold over three million of their devices.

It would seem a no-brainer to proliferate these ovens, stoves and grills across sub-Saharan Africa and part of the Middle East. The benefits would be enormous. So, however, would be the costs. And who’s going to pay to make life better for refugees and the poor? No market, no exit strategy, no investment.

Do you see what I mean? The profit motive breaks down when the need is great but no money is available. These are humanitarian problems but they are also women’s issues as poor women often bear the brunt of both work and danger. Can science fiction solve them? Well, it’s possible that science fiction could come up with the concept for a future technology solution but it’s going to take more than that to get these products manufactured and distributed to where they will do the most good in the world.

Ideas on that, anyone?